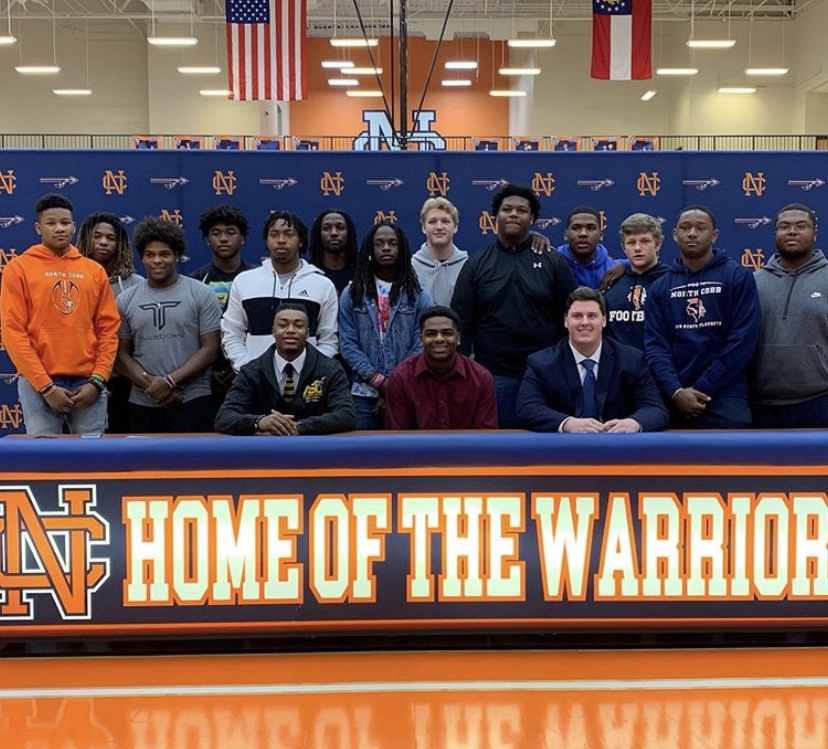 NC Varsity football players (pictured left to right) Malik Washington, Kalen Carver and Joshua Kimmons wear colors that represent the universities they officially signed to. Their football team surrounds and support the seniors as they begin preparing to take the next step to further their career.

As the school year comes to an end, senior athletes start signing with different colleges all around the United States to begin their college careers. Seniors Kalen Carver, Joshua Kimmons and Malik Washington signed with three separate colleges on February 5, National Signing Day, to further their football career.

NC Varsity football player Kalen Carver began playing football at six years old and instantly fell in love with the sport. Carver both enjoyed and performed best in football compared to other sports he played in the past, such as basketball.

“I chose this school because it is very close to my family, and I wanted a chance to play in front of them. The coaching staff is also family friends so it made me very comfortable,” Carver said.

He wants to continue playing in college given that he loves the sport, and he spends the majority of his time training and preparing for the sport. After college, Carver hopes to make it to the NFL, but if all else fails, he plans to become a lawyer.

Kimmons’ love and passion for football began when he first started playing at six years old. Kimmons carried this passion throughout high school and plans to continue playing for as long as possible.

When the time came to choose a school, Kimmons immediately knew East Tennessee State would help him grow as an athlete.

“When I went on the visit, all the players there were like family to me; it just felt like home to me,” Kimmons said.

Despite his excitement to begin this new chapter of his life, Kimmons admits he will miss his teammates the most thanks to the special bonds they created.

Malik Washington looks to Alabama State University (ASU) to further his education and football career. Washington already thought of ASU as one of his top choices for college, so after his brief visit to the campus, he made up his mind.

He wants to finish college with either a bachelor’s or master’s degree with no debt, something he looks to accomplish through this scholarship. His passion for football carried him through high school, and he looks forward to where it will lead him next.

“I have a lot of passion for the game. It has opened so many doors for me, and I just want to see how far it will take me,” Washington said.

The future looks bright for these three players as they prepare for their college careers. Their lifelong passion becomes a source of financial aid for their education as they pursue their own professions and interests.