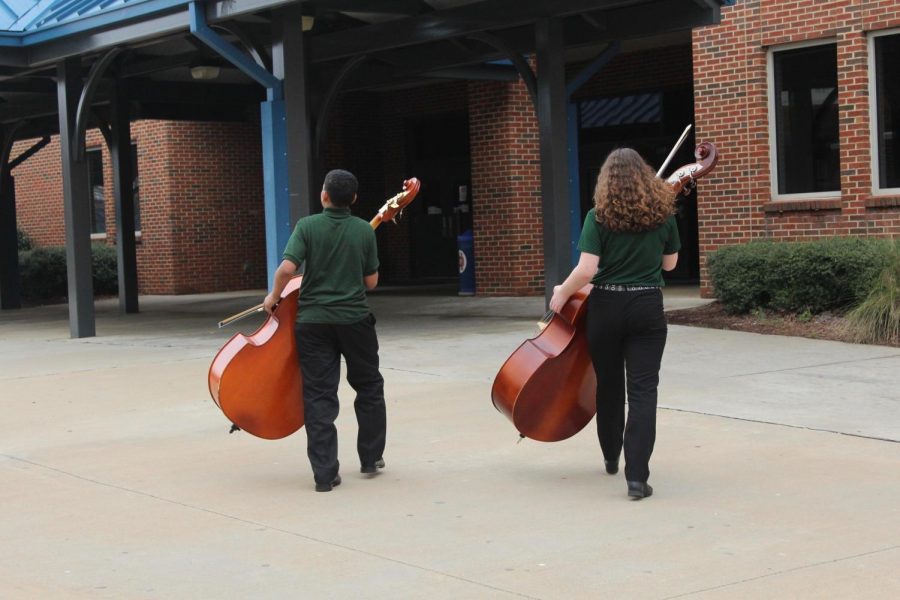 Complications inevitably arose for the guest ensembles, who spent the week here performing as part of their large group performance evaluation (LGPE). Although the rain posed a danger to their instruments, the students adapted by rerouting around the courtyard until the weather cleared. Through the efforts of those who contributed, all groups received the opportunity to perform to the best of their abilities.

Orchestra students from nearly twenty-five schools across the county gathered at NC the week of March 2 for their annual large group performance evaluation (LGPE). NC volunteered to host the three-day event with the use of its new performing arts center, as well as the band, orchestra and chorus rooms, all available for their leisure.

“Because we have a new hall, we decided we would host this year. Basically it’s just to share the wealth because Lassiter has done it for so many years, or it’s always at Walton. As you can see we’re using a lot of the big classrooms, and if you don’t have the space at all, then it becomes a problem,” Orchestra director Paula Krupiczewicz said.

Classes made adjustments to accommodate the event, as each room where the groups played needed to hold up to 95 orchestra members at once: band classes relocated to the old black box theater to provide a warm-up space for the visiting ensembles, while the chorus supplied their room for sight-reading. Orchestra classes observed performances in the Performing Arts Center during the time when they would normally rehearse. Student volunteers worked to guide the visiting groups around the school and streamline the process, as well as performing their own pieces in NC’s ensembles. Other volunteers from NC’s orchestra classes helped to facilitate the event, participating as a stage crew, judge runners to carry messages for those judging the ensembles, or as hosts and guides for the school groups that attended.

“[Hosting LGPE] involves basically all of the background work: making the schedule for the event and having student volunteers work as ensemble hosts to get all of our visiting schools through the school. [This is] so that the visiting schools can have a good experience here at North Cobb, and make the flow a little easier, which helps take the pressure off of the teacher so there’s less stress,” Krupiczewicz said.

Thanks to the work of those helping behind the scenes, each ensemble received the chance to showcase their skills.