NC Lady Warriors Fall to Mustangs in a Double Header 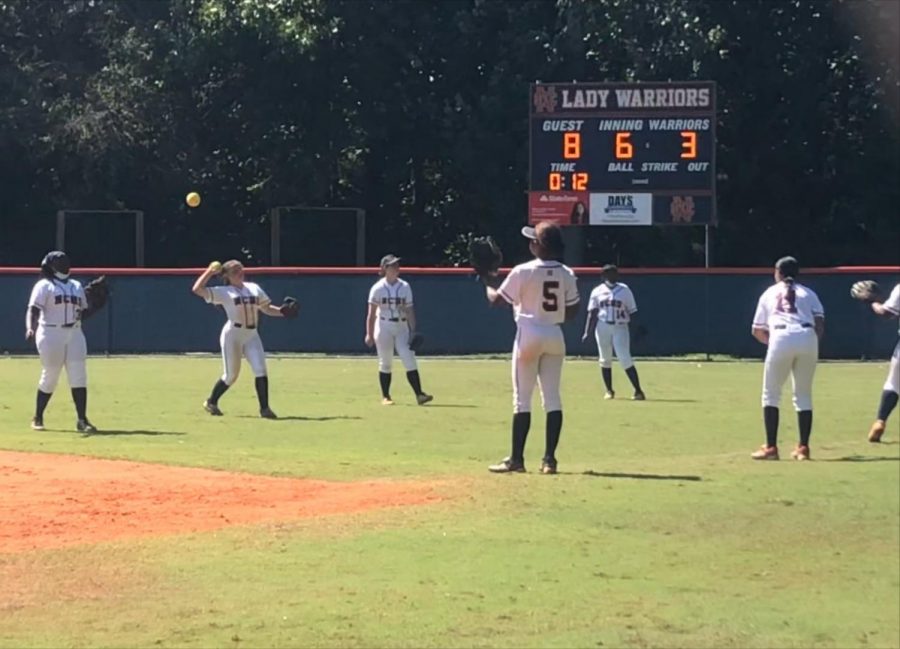 The Lady Warriors hold high hopes for their next regional game Tuesday, October 6 at 6 pm against the Walton Lady Raiders. “As for the next game, I believe we will win. Last game we won 9-7 and it was a good, competitive game. Our defense was solid and hitting on point. If anything happens I think it will be a positive direction to score first and ride it out ‘til the end for the win! Us girls just need to have confidence in ourselves and as a team,” senior Kendall Minard said.

On Saturday, October 3, the NC varsity lady Warriors went up against the Kennesaw Mountain Lady Mustangs in a doubleheader. The afternoon held clear, sunny skies with a temperature of 64 degrees and a slight breeze. The game had a good turn out with fans of both teams there to support the players.

For game one, NC freshman Sam Matthews pitched to freshman catcher Lauren Byrd behind the plate. Starting off the day, the Mustangs came out strong with two first-inning runs. The Warriors answered back when senior Kristen Rainey scored a run. This concluded the first inning with a 2-1 Mustang lead. The second inning caused no change to the score, but the Lady Mustangs batted in two more runs in the third inning. To combat the visiting teams’ newfound points, senior Kendall Minard scored a run for NC. As a result, the Lady Warriors went down 4-2 after the third inning concluded.

As the game approached the last few innings, the Mustangs capitalized by scoring an additional three runs causing a backlash from the Lady Warriors’ coach Michael Turchan and parents. After a heated discussion between Coach Turchan and the umpire, Turchan became restricted to the dugout but still cheered on his girls. Thus, concluding game one, Kennesaw Mountain’s Lady Mustangs, 11 NC’s Lady Warriors, 3.

With thirty minutes to spare between game one and game two, both teams went back to the drawing board and switched up the game plan. NC coaches and volunteers prepped the field and got everything ready for the next game. With a new umpire behind home plate, NC hoped for more calls in their favor.

Game two consisted of four innings ending with a score of Kennesaw mountain 12, North Cobb 0. For the first two innings, number seven Dehlin Lee started off pitching with number 21 freshman Aubrey King as catcher. During the third inning, the Lady Mustangs scored a total of 9 runs. During which, NC’s number 7 pitcher switched with number 15. This ended the third inning 11:0 and the Lady Mustangs added one more run in the fourth inning, resulting in a  12-0 victory for the mustangs.

Despite the Lady Warriors’ best efforts, they could not pull out a win. After regrouping, NC will play again Tuesday, October 6 at 6 pm. The team will host the Walton Lady Raiders in region play and hope to score a win for NC.