Warriors explode over Raiders in a key region game 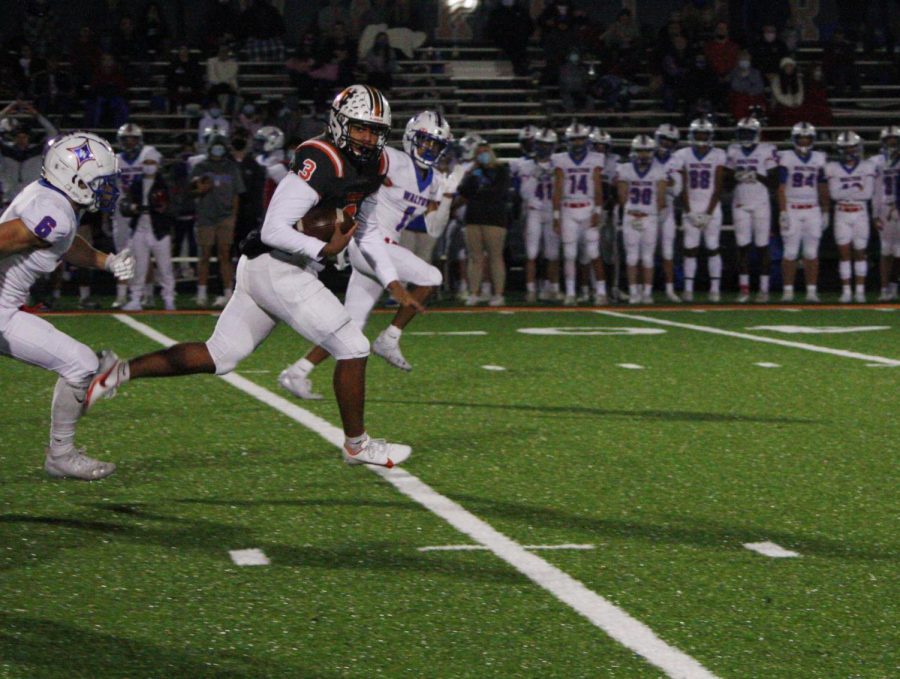 NC sophomore quarterback Malachi Singleton charges down the field cradling the ball in hopes of securing a touchdown for the NC Warriors. Singleton, tailed by Walton senior Austin Eldred and junior Cade Thompson, eventually scored multiple touchdowns proving himself once again as an asset to the NC Warrior team.

The NC Warrior varsity football team (6-1, 2-0) came back from a double-digit halftime deficit, to overcome the Walton Raiders (3-4, 1-1) in an important region matchup. Following their first region win over Harrison last week, the Warriors looked to maintain their spot on top of the county rankings and continued their quest for a region title. Despite an abundance of turnovers and mistakes, NC prevailed over the Raiders on Friday, October 30 at Emory Sewell Stadium, 35-18.

“Our defense is buying into what we do. It took us all offseason to install this defense, and with no spring ball. So, it’s coming together. They’re doing a great job,” NC Head coach Shane Queen said.

NC senior quarterback Trevor Lovett received the “nod” to start after a hot performance in the previous game against Harrison. The offense, slow the entire first half, accounted for four of the five first-half turnovers which saw both Lovett and NC sophomore quarterback Malachi Singleton throwing an interception and losing a fumble. NC senior defensive back Nasir Howell added in an additional pick to give the Raiders’ only turnover of the half. Howell, along with several defensive players, led the NC defense the entire night in holding the Raider offense to limited scores, despite great field positioning. Heading into the locker room, the Raiders compiled a 12-0 lead.

With cleared minds and something to prove, the Warriors stormed back and took control of the second half. Singleton carried in a 1-yard touchdown on the first possession of the third quarter, bringing the score to 12-7. The Warrior defense then recovered a fumble, leading to a 65-yard passing touchdown from Singleton to senior wide receiver Xavier Clark. Clark added in an additional 53-yard catch on the previous drive, tallying 128 yards and 4 receptions on the night.

With a brand new 14-12 lead, the Warriors never looked back. Junior defensive end Joshua Josephs snatched an interception, setting up for a 7-yard touchdown run by senior running back Cam Cunningham.

After an 86-yard bomb from Raider quarterback Zak Rozsman, turnovers made another appearance. Lovett lost a fumble, but senior linebacker Montrel Jenkins collected an interception. With a 21-18 lead and an awkward fourth-and-9 red zone situation, Coach Queen called a risky play, which worked in the Warriors favor. Singleton dropped back and delivered a jump ball for senior wide receiver Tray Curry to leap up and grab. On the next defensive possession, Jenkins added in another interception for a touchdown, putting the game out of reach, 35-18.

Singleton finished the night with 184 yards through the air on 10-15 passing, with 143 rushing yards. Lovett added 53 with his feet, and Cunningham pitched in an additional 46.

The NC Warrior football team hopes to continue their winning streak and keep their place atop the region standings. Despite an array of turnovers for both teams, the Warriors persevered and overcame the Raiders. The Warriors take on the Hillgrove Hawks on November 6 at the Hawk Stadium.