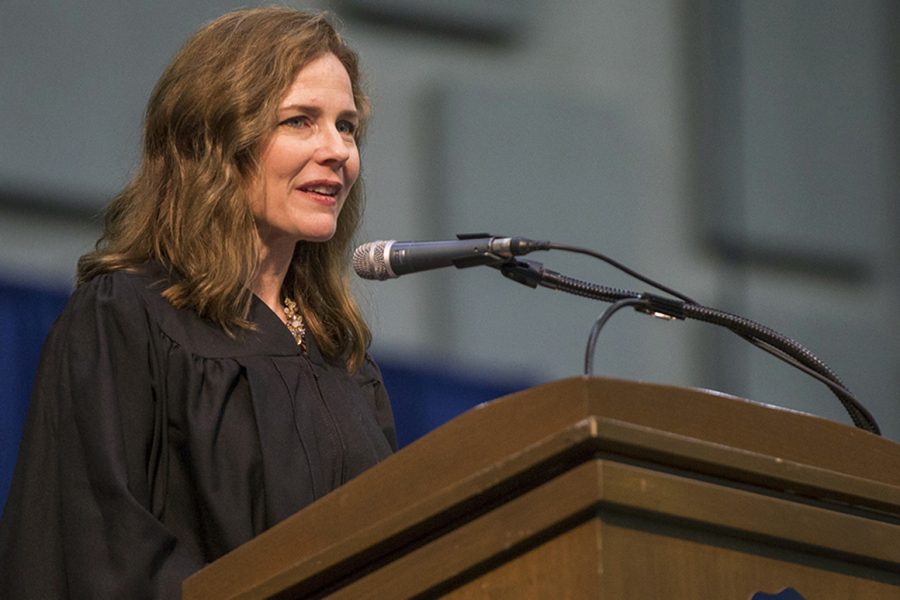 On October 26, 2020 Amy Coney Barret took her seat as Assistant Supreme Court Justice and ensured the Conservative majority within the Supreme Court. Prior to her nomination, Barret served as an American Lawyer and Jurist.

“What a surprise that the people in control of the Senate would block a nomination when it suits them, and then rush a nomination when it suits them. Anyone who’s complaining that the republicans are being “hypocritical” should realize that not only is this exactly how the game is played, but that the democrats would do (and probably have done, in other circumstances) the exact same thing. If you want a change, you and everyone you know need to quit voting based on red and blue,” Kennesaw Mountain senior Jimmy Bouban said.

Barret serves as a replacement for Justice Ruth Bader Ginsburg who passed away September 18, 2020. With Barret taking her seat in the Supreme Court, this generation sees an overwhelming majority of Conservative Justices. This could mean that Supreme Court rulings may favor the Republican party for the foreseeable future due to the life terms Justices serve. This has led to a rise in concern for Roe V. Wade and the future of Planned Parenthood as a whole in the United States.

“Reproductive rights are human rights, and I feel that Roe v. Wade being overturned would be a step backward for the country. I also worry that Planned Parenthood’s funding could be threatened. They do so much more than just abortions and them losing funding could lose a lot of people necessary healthcare,” NC junior Amelia Orr said.

While some worry for the future of the country under a conservative ruled Supreme Court, Barret claims that she will serve as an independent judiciary and act on what she believes would most benefit the American people. Only time can tell whether or not she lives up to this promise. For those concerned about her nomination, make sure to vote by November 3, 2020,  in order to ensure that each American citizen has a say in the future of politics.