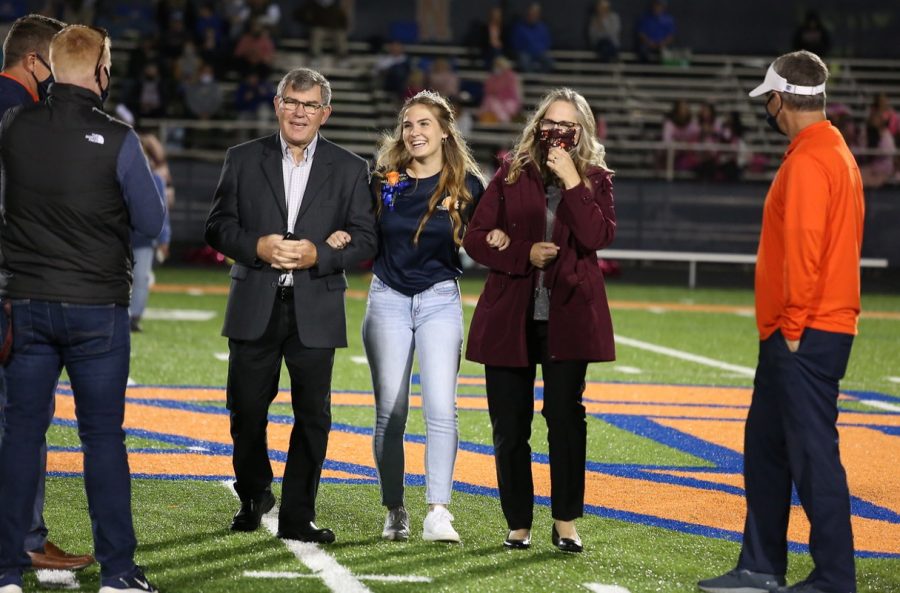 Although numerous differences presented themselves this senior night compared to others, students still experienced their last days with people who love them and recognized them because of the amazing commitment they put forth. Lillian Southall walked across the fifty-yard line with her two parents at senior night, causing her to reminisce over her years in the band.

The marching band program at NC takes in everyone willing to put in the hard work, and director Sheldon Frazier continually leads this large group to victory. They scored well in past competitions, and continue to awe crowds with their performances and skills. Now, after four years in a program that numerous students considered their family, marching band seniors must bid a sad farewell to their peers.

Senior night featured a game against Etowah High School on Friday, October 2, and the night became much more memorable after the NC varsity football team won. After fifteen years of coaching, this game marked Coach Shane Queen’s hundredth win. The pep band, composed of 60 members, played their stand tunes at the game, cheering on the football team while the seniors created lasting memories with their closest friends.

At half time, the seniors walked across the fifty-yard line with close family and friends as a way of recognizing their dedication and hard work to the group. People in the stands cheered them on and the band photographer, Reginald ‘Reggie’ Dill, took photos of all the seniors.

“Walking down the 50 at half time was so surreal that this is my last year as a North Cobb Marching Band member. It was amazing being able to reflect on the wonderful past four years with the people who made me the happiest,” A  senior drum major in the marching band, Lillian Southall, said.

Usually, members place life-sized pictures of the seniors all over the band room walls, allowing people to acknowledge them because of their commitment. Seniors also gave speeches in the past before the game and reflected over their time, but the pandemic limited the group’s options. Instead, each section of instruments gathered lots of gifts and candy to give to their seniors, as well as posters that band members will hold up to cheer their seniors on.

“We created personalized posters for our seniors, covered in small doodles and drawings of their instruments. It made everyone happy to be able to gift them with things they will remember forever,” A member in marching band, Quincy Johnson said.

“I know a lot of my band family will go into college band/marching band, and I may if I have time to. Regardless though, I will treasure the time I’ve spent in the marching band. I will miss the sheer community we had. We were always there for each other and cared for each other,” Senior clarinet, Graci Eckles, said.