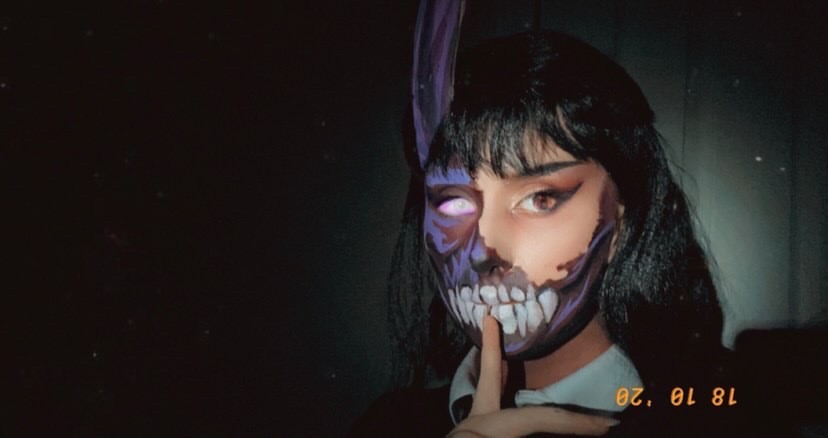 Content creator Corpse Husband inspired NC junior Josie Marchion when making her DIY costume. “I really enjoy the different aspects of his content. His horror stories that started his channel are the type of thing I really tend to be interested in, and his new gameplay that he’s recently been doing has been entertaining and shows a lighter side to his personality that you don't get to see from spooky stories,” Marchion said.

The Chant hosted a DIY costume contest during the month of October to encourage  Halloween spirit.  During the contest, students entered with their homemade costumes for the chance to win an Amazon gift card. For this contest, junior Josie Marchion won with her makeup look inspired by content creator Corpse Husband.

Marchion became a fan of the content creator five years ago and continues to enjoy the different styles of content that he produces. Corpse Husband originally started telling horror stories on his YouTube channel which sparked Marchion’s interest. More recently, he began to stream live gameplay videos where he plays games such as Among Us, a multiplayer online game where players work together to find the imposter among them.

Marchion became inspired to create this makeup look after Corpse Husband’s recent rise in popularity during her personal experience with moving and virtual learning. Marchion moved from Louisiana to Georgia over the summer. She felt like her newfound struggles with remote learning paralleled the vague character portrayed by Corpse Husband online. Corpse Husband chooses to keep his identity hidden, no one knows what the content creator looks like, they only associate him with his ghostly profile picture. Similar to other students at NC, Marchion occasionally turns off her camera while in class.

“I felt I was similar in a way to him; people only know the voice but not the face attached to it,” Marchion said.

Marchion started experimenting with bold and special effects makeup looks a year and a half ago and started to share her creations online last year. This specific look took her three hours to complete. Marchion used a combination of makeup and paint along with an attachable bunny-like ear made out of cardboard and painted to bring the look together.

“I enjoy the ability to create almost anything and using your own face as a canvas. Besides that, it’s also a way I like to relax and kill time,” Marchion said.