The myth of manifesting 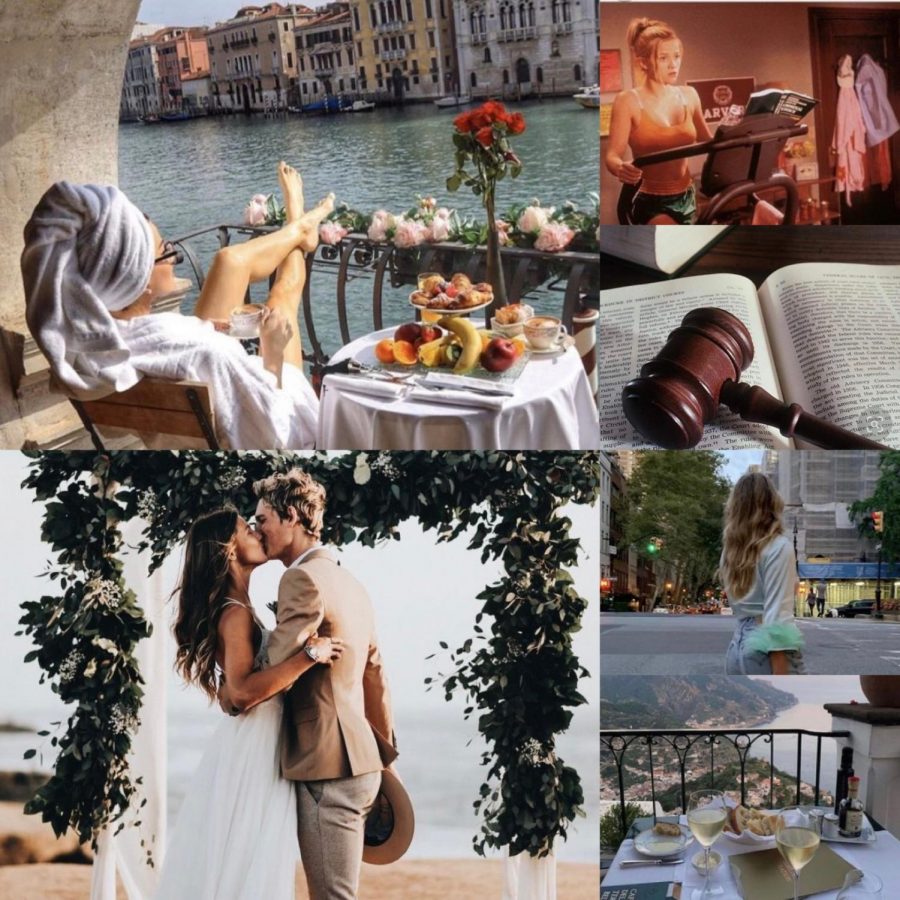 Vision boards, a simple way to visualize a future that one would like to attract, all too often can become very materialistic. In this example, a career, relationship, and travel have been manifested. Long-term goals, along with a positive mantra, make manifesting become more realistic and attainable.

Originating in the United States, specifically Portland, Oregon, the New Thought Movement brought new ideas to the 19th century. Despite the name, many of the practices of this movement come from ancient thought, including the recently popular Law of Attraction.

The main idea of the Law of Attraction consists of attracting the things wanted into one’s life by focusing on them. Users of the Law of Attraction send their goals out into the Universe for them to turn into a reality. This can include simple positive affirmations or more specific goals, such as a new job. People also call this act of attracting “manifesting.” Manifesting can happen through meditation, vision boards, or even without knowing. Only recently, with the rise of YouTube channels and TikTok, manifesting has become a massive trend among youth.

Lifestyle Youtuber, Luca Whitaker, preaches the Law of Attraction, meditation, and manifesting in numerous videos on her channel, even producing content to teach subscribers how to manifest. At just 18 years old, she has implemented an ancient practice into her everyday life. Subscribers feel drawn to Whitaker’s channel because of her positivity and calm nature, all while inspiring teens to try the Law of Attraction for themselves.

“I watch all of Luca’s videos, especially ones about the Law of Attraction because I love how bright and motivating they are. They always inspire me to be positive in my own life and help me to create future goals,” said Magnet senior Sophia Green.

People still feel skeptical about the idea that focusing on something will make it come true. Although it sounds silly, manifesting positivity and long-term goals do help people focus on their goals. Of course, thinking about a brand new sports car will not make one magically appear in the garage, it can inspire a path for one to work hard and make the money to afford the luxury. Via TikTok and Pinterest, teenagers create vision boards full of pictures of other people’s lives, hoping to manifest it into their own. They typically include a big house, luxury items, vacations and a picture-perfect family. This can create feelings of despair when their lives do not play out according to someone else’s, so many Law of Attraction users also preach that the Universe may know a better plan. Gabby Bernstein, motivational speaker, author, and “spiritual junkie,” teaches manifesting practices to her fans. She believes that manifesting must include positive thinking, trust for the Universe, and consistency.

Despite the skepticism, the Law of Attraction and manifesting does hold legitimacy when practicing it correctly and without specific, shallow thoughts. It consists of more than just wishing, if someone wants to become successful, the path towards this includes clearing the mind of negative thoughts surrounding success and acting as if they already obtained success. It aligns directly with psychology, for example, if one thinks negative thoughts, they will prompt negativity around them. Manifesting does not need to take up an entire day, just a few minutes of visualizing your future can lead to major change.