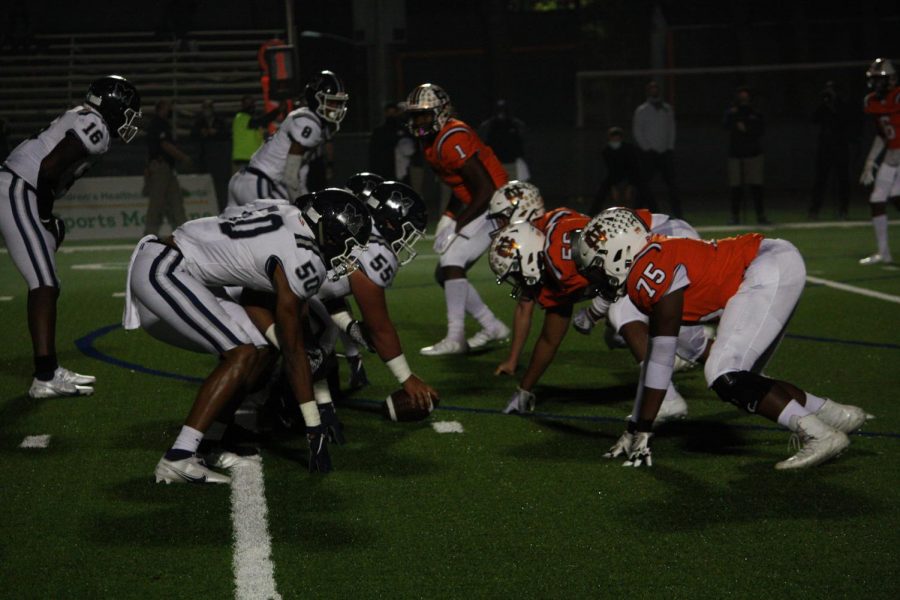 As the NC Warriors line up, they experience an insane amount of pressure due to Friday’s game’s region status. Despite the Warriors pulling through at the end, the game educated the team on where they can improve.

The NC Warrior varsity football team (8-1, 4-0) clinched their first region title since 2013 with a win over the Marietta Blue Devils (2-7, 1-3) in a nail biting shootout. The Warriors also looked to maintain their spot atop the region rankings and earn home field advantage for the first round of the state playoffs. Though the NC offense started out slow, they prevailed over the Blue Devils on Friday, November 13 at Emory Sewell Stadium, 28-26.

“I knew they weren’t going to lay down. They’re a great program. We expected a dogfight, and that’s what we got. It’s not the season they expected, but their kids fought every single play, and my hat’s off to them,” NC head coach Shane Queen said.

Starting out, Marietta junior quarterback Tyler Hughes led the Blue Devil offense on a 87 yard scoring drive with the opening possession of the game. The Warrior offense struggled to move the ball down field during the first quarter, but turned things around after NC senior middle linebacker Jadyn Walker intercepted Hughes twice. Both of  these turnovers led to scores, with NC sophomore quarterback Malachi Singleton punching in a 2-yard touchdown run along with a 11-yard touchdown run,  putting the Warriors up 14-6 at the end of the first half.

“It feels great to go out there and help get a win for my team. Putting them on my back on those last few carries (to close out the game), felt really good,” Singleton said.

Coming out of the locker room, the Blue Devils started out quick on its first two possessions with Hughes scoring, bringing Marietta ahead 20-14 with 4:08 left in the third quarter. Singleton brought in another 4-yard touchdown run to push the Warriors ahead 21-20, but went down 26-21 after a Marietta touchdown pass. On the next possession, Singleton completed a 33-yard pass to NC sophomore running back Ben Hall which led to a 1-yard touchdown run by Singleton. After a clutch defensive stop midway through the fourth quarter, Singleton and the NC offense ran 7:24 off the clock, which included a 4th and third first down run by Singleton to close out the game.

Singleton finished with 30 carries for 138 yards rushing and 110 yards through the air on 12-of-19 passing. Singleton also tallied a total of 4 rushing touchdowns on the night. The Warriors posted 265 rushing yards as a team, with Hall adding 52 yards and NC senior running back Zarrian Cook contributing 45 yards. Other notable performances came from NC senior wide receiver and backup quarterback Trevor Lovett, who gained multiple first downs when needed. NC senior safety Cobe Singleton and junior defensive end Joshua Josephs also caused havoc on the defensive side of the ball.

“Every week is tough, and hopefully that’s going to prepare us for the playoffs. It was a very physical game, but we had some young guys step in and make plays for us,” Queen said.

The Warriors earned their fourth region title in program history, and became the first team in state history to beat three defending state champions (Marietta, Buford, Harrison) in the same season. NC also clinched a #1 seed spot in the playoffs and gains home field advantage for the first round of the state playoffs. The NC Warrior football team hopes to close out their winning streak in the last regular season game of the season, and prepare for the state playoffs. Make sure to catch the Warriors as they take on the North Paulding Wolfpack on November 20 at Emory Sewell stadium.