From Buffalo to Kennesaw: Anchor Bar 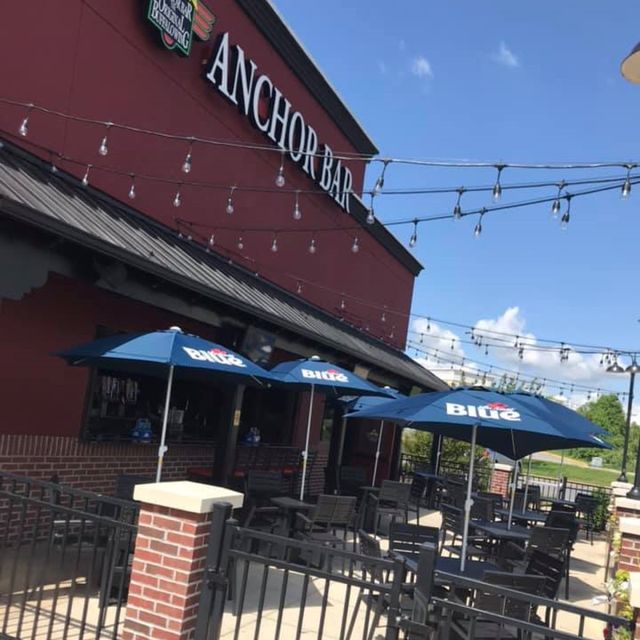 The lively atmosphere of Anchor Bar juxtaposed with live entertainment can be enjoyed outside or inside with versatile seating. The restaurant also hopes to expand on the restaurant and allow guests to play cornhole and other activities while dining.

Best known for creating the buffalo wing, Anchor Bar, planted its roots in Buffalo, New York in 1964. Since the founder, Teressa Bellissimo invented the game-changing food item, Anchor Bar has opened up shop around the country with 16 different locations across Maryland, New York and Texas, but Kennesaw welcomes the first southern incarnation of Anchor Bar. The hot, new restaurant opened up near Town Center Mall, where the famous Fudruckers used to live.

The buffalo wing created by Anchor Bar spread like wildfire to bars and restaurants around the country, but Anchor Bar’s culture surrounding Buffalo and the Bills football team make the company a unique, inviting experience to dine at, even in Kennesaw. Despite the ongoing pandemic, which delayed the opening by three months, the Kennesaw general manager, Brandon Baker, hopes to open five more locations around the South.

“I really like working at Anchor Bar because I am able to meet a lot of people that are from New York and are so surprised and happy that a part of their culture has come down to Georgia,” senior and hostess Macey Lawrence said.

The original medium Buffalo wing sauce easily makes it onto customers’ plates the most often, but Anchor Bar’s menu also consists of eight other sauces and six rubs, such as Cajun, Jerk, and Habanero Ranch. Besides wings, the restaurant boasts burgers, sandwiches, and pizza to accommodate all taste buds.

“I think Anchor Bar is unique because we have great wings, but we also have other unique menu items, like the roast beef on weck, which we don’t really eat in the South typically. A lot of people don’t see the other food items because their main focus is the wings,” Baker said.

Aside from making amazing wings, Anchor Bar hosts several events each week, such as trivia nights and stand up comedy shows. Guests can enjoy the Buffalo culture through the decorations and the food with live entertainment.

Anchor Bar will always stand true to the original menu created in Buffalo, New York, but they will drop a brand new menu by 2021, including a unique loganberry wing sauce. Despite changes, the wings and the culture will never change and continue to give Anchor Bar its identity.

“I think history is one thing you just can’t get away from. Other restaurants have been around for a while, but Anchor Bar is made of so much more history and culture straight from Buffalo New York,” said Baker.