Teachers bullying students: stories behind the abuse and actions taken 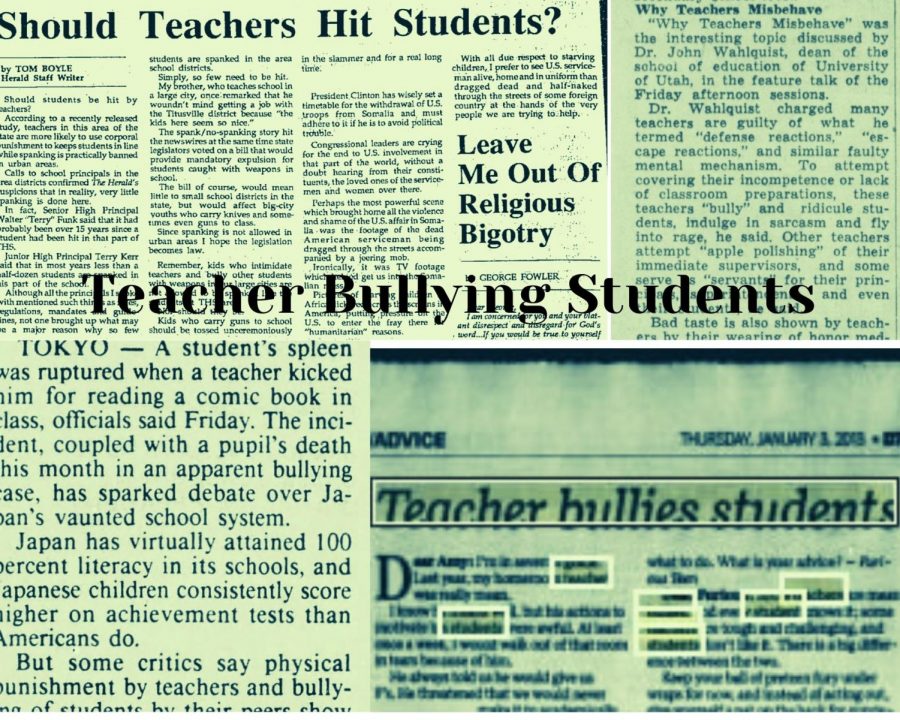 Bullying in all forms causes a number of disadvantages for both the student and the parent. When looking at teachers bullying students, the issue although not as prominent in comparison to regular bullying, strikes a concern among parents. The act coming in forms of physical abuse through corporal punishment and verbal abuse through rare occurrences continues to become an issue, rarely addressed within the media and news.

School, an institution filled to the brim with knowledge and young adolescent minds, takes the undeveloped brains of young students and fills them with new information and real-world concepts. Within these institutions, however, lies the realities of racism, sexism, and bullying, an outcome that both students and teachers produce. These teachers who disregard the rules and guidelines of their educational demands, misuse their responsibilities of preparing children and teens, becoming an issue ignored in the media and news.

“Bullying in all forms is a consequence of a power imbalance in the school or home life, and that bullying is often not properly handled in the school system,” NC Senior Emily Wagnor said.

The problem begins when a teacher targets an individual or group of students and belittles them to a point past standard discipline. Typically, the faculty member portrays entitled or self-absorbed characteristics, usually ignoring or failing to recognize a student’s intellectual progress, making fun of a student’s mistakes or disabilities such as their lack of knowledge on a concept learned within a concept, and at times using slurs and hateful comments. The target of these instances occurs especially with younger, adolescent students, even those mentally disabled.

In 2011, special needs Ohio student Cheyanne faced teacher bullying, when her middle school teacher at the time Christie Wilt and aide Kelly Chaffins began saying disturbing comments to Cheyanne while in the classroom. Cheyanne reported the incidents to her parents and began keeping a hidden tape recorder in her clothes recording the detestable comments based upon Cheyanne’s intellect, lack of friends and even her weight and appearance. Her parents after playing the recordings spoke to an unhelpful Miami middle school principal and eventually took the case to officials, demanding that Chaffins resign. The family soon after filed a lawsuit for the incidents gaining $300,000 for the damages.

Sadly, cases like Cheyanne’s result not only in legal action, (a factor that at times doesn’t even occur) but in devastating psychological effects, causing illnesses like depression, anxiety, and drug addiction. Studies show that bullying invokes a number of effects on the victim’s self-esteem. This includes the abused student no longer interacting with other peers after facing humiliation and persistent taunting.

“If a child is being bullied by a teacher, they should contact their parents immediately. If they can’t rely on that however they should seek help from the Principal and eventually local police,” NC Senior Taylor Baul said.

To prevent further damage, the student and parent must respond, working with one another to achieve a consensus documenting the incidents as they occur. First and foremost, the child must report all bullying incidents, if possible, quoting the exchanges the teacher made with the student. The parent should make sure to note all forms of bullying, including cyberbullying and physical harassment. Parents, also while documenting events, should support their child within the trauma, providing emotional support, and a safe place for their students to talk and express their grievances.

If the bullying persists for more than a month, both the student and parent should follow the chain of command, speaking to principals, administration and the teacher themselves. Also, the student should find any friends or key witnesses of the abuse and allow them to speak out against the teacher to move forward the claims to put an end to the violence. After expressing concerns, if the authority denies the accusations and continues to allow the abuse, legal action may come into play.

In addition to verbal abuse, the use of any physical harm should strike a concern in parents especially with methods such as corporal punishment. In the 20 century, teachers could physically hit their students with a paddle as an alternative to detention on their permanent record. The concept, although an alternative to detention at the time, quickly became a form of abuse when students making simple mistakes such as violating the dress code faced harsh harmful consequences.

“I believe that certain students will never learn until they are given something that desensitizes them to stop them from misbehaving, but corporal punishment shouldn’t necessarily be punished in schools, it is more a parent’s decision,” Baul said.

The student and his parents eventually filed a lawsuit arguing that the Principal and his assistant violated the eighth amendment’s ban on“cruel and unusual punishments” and the due process clause of the Fourteenth Amendment, which requires prior notice by a court an opportunity to be heard. A district court dismissed the complaint, and the decision later went to a Court of Appeals. Then, in November 1976 the case went to the U.S. Supreme Court, with the court dismissing the case and failing to acknowledge it as a crime.

After the controversial case, the prevalence of school corporal punishment decreased within the 1970s, declining from four percent of the total number of children in schools in 1978 to less than one percent in 2014.  In a recent survey by public-opinion research, most Americans detest the idea of corporal punishment with 77% in 2002 and 72% in 2005 opposed to the tactics as well as a national survey ranking corporal punishment as the least effective method of discipline among other techniques. In addition to the opposition, the method triggers severe physical damage and contributes to the mental and emotional abuse of bullying in all forms. And remains legal in 19 states including the state of Georgia where it’s a rarity.

In regards to Georgia, the state remains efficient in allowing traditional methods of discipline such as detentions or suspension, to ensure the safety and self-respect of students within schools. The only occurrences most prominent within the last decade, relying on the use of corporal punishment in charter or privately owned schools. As seen in 2018 when an Atlanta Charter school sent parental consent forms for use of corporal punishment shocking numerous parents and students.

Overall, if a student experiences any form of bullying from a teacher or adult, the child should feel the freedom to report and expose the bully respectfully. This includes taking actions, speaking with respectable authority and documenting incidents for conferencing and possible legal action. Georgia does it’s best to prevent student abuse and discipline its students fairly. The important aspect in all is to remember that amidst the pain of difficult situations such as teacher bullying, victims gain the power to use their voice.