College costs over the past years have skyrocketed, with students worrying about dorm costs, books, tuition, food plan, and other miscellaneous activities that colleges throw their way. College students withdraw more loans now than there was in the early 2000s, and a group of students decides not to further their education, and some drop out midway because of the overbearing cost. (Racheal Oni)

College costs over the past years have skyrocketed, with students worrying about dorm costs, books, tuition, food plan, and other miscellaneous activities that colleges throw their way. College students withdraw more loans now than there was in the early 2000s, and a group of students decides not to further their education, and some drop out midway because of the overbearing cost.

College tuition over the years

Over the past years, colleges became more important than ever because society sets its mind on the fact that success comes from attending college, and the job market requires higher education for most jobs. The United States proclaims education as the preferred method of providing the opportunity to attain self-sufficiency. Upon high school graduation, students are expected to attend a quality college, but the amount of money a person pays upon acceptance into college can make attending discouraging for some students from low-income families. The advantage of obtaining a college degree in this day and age does not completely overlap the disadvantage, in other words, the opportunity cost.

Like any other major life decision college carries an opportunity cost, this refers to the amount of money an individual would potentially earn during the time period of attending college, if the individual worked and earned $30,000 per year while attending college, the opportunity cost would equal to $90,000. The role of education as a bridge to adulthood grew from elementary to secondary schooling and beyond. This occurred because workplaces demanded higher educated workers as the United States moved into a modern digital economy causing colleges to become popular over these decades.

When people think of attending college, a certain image resides in their heads —an image of a place filled with students, dorms, dining halls, and giant academic halls filled with classrooms and offices. Most students would like to experience this opportunity but it comes at a great cost, and students find themselves attacked with additional fees like orientation, lab, and transportation fees on top of the regular tuition.

“I have to pay all my tuition and I work at a Forever 21 store, go to school seven days a week and I believe that school should not cost ten thousand dollars. If anything, high school should cost money because most parents have enough financial stability to pay for high school,” Georgia State University freshman Shosho Akinyele said.

Students without scholarships find themselves paying for all of their tuition by themselves either by finding a job or applying for a student loan, a sum of money borrowed for education which students pay off in the future in most times with interest. Student loans can come from the federal government, from private sources like a bank, a financial institution or from organizations. Loans made by the government, called federal loans usually contain more benefits than loans for a bank or other private sources.

As stated in an article by a nonprofit organization called the Southern Regional Board Of Education, “the rising cost of college hits low-income families hardest, slowing progress toward states’ educational attainment goals, and the workforces their economies need.” 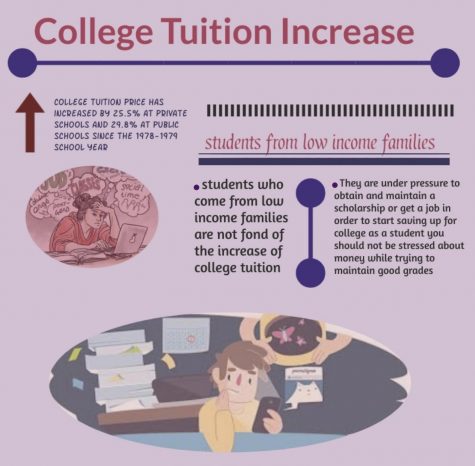 Students from low-income families begin worrying about how to make money to pay for their college tuition, which leads to most of them applying for a student loan, a sum of money borrowed for education which students later pay off in the future in most times with interest causing massive amounts of debts like this can delay future events like buying a house and getting medical or dental care. students even remove four-year colleges from consideration, and because of expensive colleges like Duke University where the tuition sums up to $58,031, students choose to enroll in less expensive community colleges. Others no longer consider college as an option due to the high tuition rates.

These students and families who find difficulties with college tuition, not only feel left out by the overwhelming costs but also feel inferior by the difference between them and middle or upper-class peers. Students from low-income families rely on scholarships. To apply to schools and take the required tests that affect chances of acceptance.

Students can also invest in the Free Application For Federal Student Aid also known as FAFSA. Colleges and Universities use this form to determine students eligibility for federal, state, and college-sponsored financial aid that includes grants, educational loans, and work-study programs, for example, the University of Georgia offers a Higher Education Emergency Relief fund known as HEER, the school base the fund grant on eligibility for need-based federal financial aid and the Expected Family Contribution also known as EFC, since EFC varies by family, the amount of grants varies for each student, and ranges from 4200 to $1,000 for a semester.

When it comes to colleges a group of students chooses a community college, also known as a junior college, and it primarily benefits its surrounding community and offers traditional academic classes that will transfer to a four-year university, and another group chooses four-year universities like Duke and such. Community colleges usually take two years to complete, and these universities take four years, in the sense that students spend the first two years taking general education requirements and the next two years taking upper-level requirements.

As reported by CNBC, a college education ranks second for the largest expense an individual will spend in a lifetime right after buying a home. One of the reasons for the increase includes the economic recession that hit in 2007-2009. Since the recession caused a  decrease in investments, families now pay much more to replace what the state once upon a time subsidized. Giving out scholarships also takes part in the issue of tuition increase because a student without a scholarship helped pay for other students’ scholarships through their tuition, room, and boarding. As college directors increase the costs, more students need more scholarships, and as these students receive scholarships, tuition increases.

One of the reasons for attending college that dominates all others: to find a job. Students attend college to pursue a career, but also an education. An individual sacrifices four to six years of their life, and also gives up lots of money, an individual that chooses not to work part-time during their studies needs to pay for housing, food, transportation, and everyday bills somehow, and working while struggling to maintain good grades can lead to unnecessary stress for students.

If the student does complete their studies, they receive a diploma that testifies that the student successfully completed a particular course of study. College graduates also tend to do well financially, however, college does not make people successful, it predicts students’ success and it does not cause it.

As written in an article by the Association of Public Land Grants university “a group of millennials with a high school diploma earn 62 percent of what a typical college graduate earns, in 2019  median income for recent graduates reached $44,000 a year for bachelor’s degree holders, and for high school graduates, the median earnings are $30,000 a year.”

The cost might discourage high school students, mostly ones from lower-income families, from attending college. For the ones that decided to obtain a loan to attend college, they have to pay for it later in the future which can also lead to a delay in whatever purchase they decide to make.

Experts have proposed ways to make college more affordable, like colleges offering more credit-for-experience options for all students, they could also decrease college costs by an average of 10 percent, and Leveraging educational technology. The National Center for Academic Transformation modified individual courses to improve educational outcomes. These courses achieved an average of 35 percent savings and improved grades, attendance, completion and retention. Online textbooks and depositories of open-source educational resources can also add to the ways in reducing the overwhelming cost.