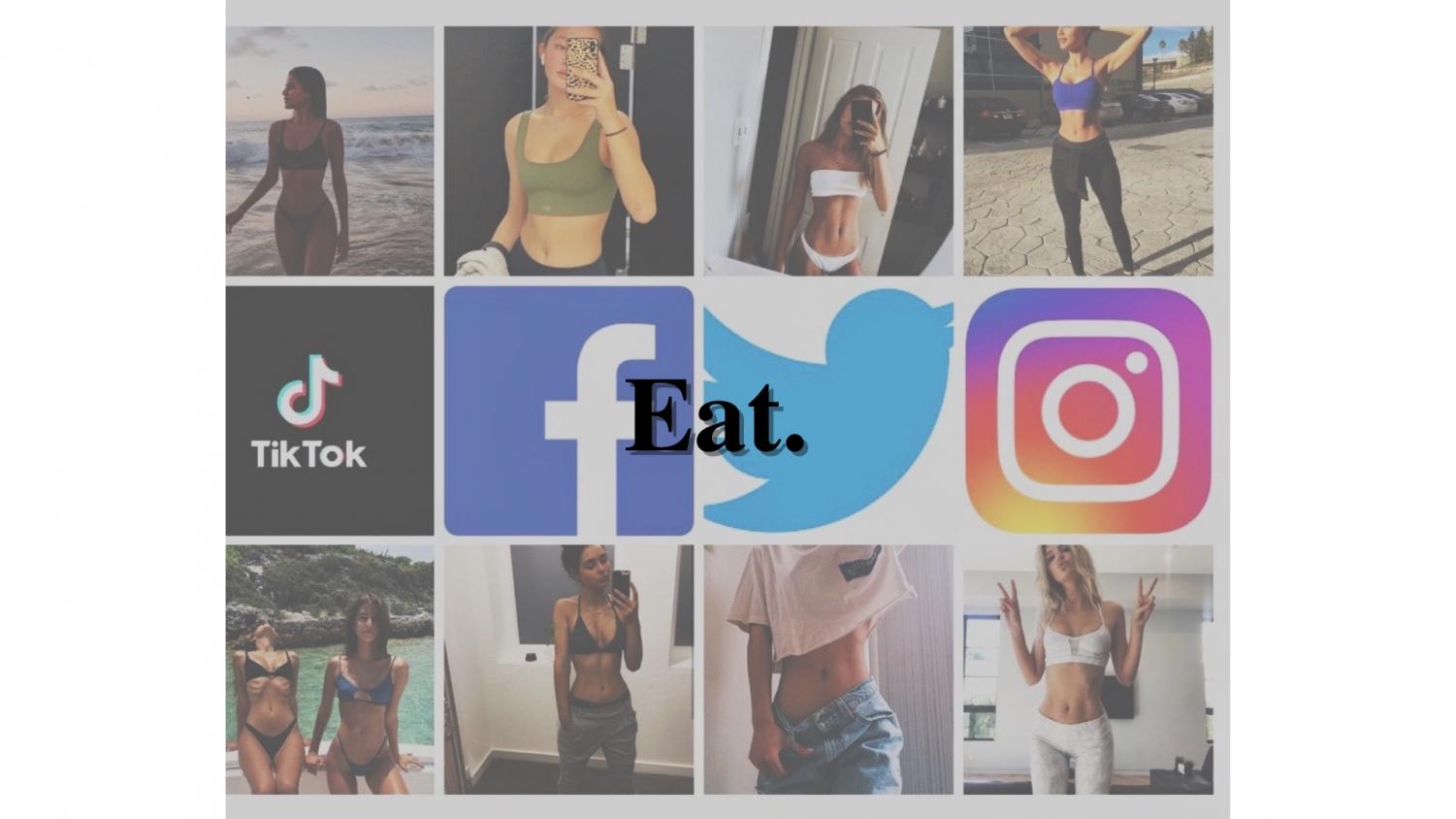 While positive influencers exist on social media, the majority of the biggest platforms consist of size 0’s, fitness trends, and harmful diets. The new age of social media continues to impact the younger generations by promoting a skinny ideal not always achievable by everybody. The lack of attainability of this perfect body type can cause harmful habits such as body checking, overexertion, and disordered eating. “Social media has probably increased disordered eating because everyone is on social media. The problem is that it’s in-your-face 24/7. Without social media you might have a day or a week to just be with yourself, to focus on your hobbies, to build resilience, to realize your value lies in connecting with family, with kindness, humor, art, schoolwork, creativity, etc. But now there is no break. The comparisons are relentless. The inner critic gets louder. The sense of inadequacy grows like wildfire. The need to diet spikes. The devastation of failure follows. Self-esteem sinks deeper,” licensed nutritionist Betsy Thurston said. (Courtesy of Pinterest)

While positive influencers exist on social media, the majority of the biggest platforms consist of size 0’s, fitness trends, and harmful diets. The new age of social media continues to impact the younger generations by promoting a skinny ideal not always achievable by everybody. The lack of attainability of this perfect body type can cause harmful habits such as body checking, overexertion, and disordered eating. “Social media has probably increased disordered eating because everyone is on social media. The problem is that it’s in-your-face 24/7. Without social media you might have a day or a week to just be with yourself, to focus on your hobbies, to build resilience, to realize your value lies in connecting with family, with kindness, humor, art, schoolwork, creativity, etc. But now there is no break. The comparisons are relentless. The inner critic gets louder. The sense of inadequacy grows like wildfire. The need to diet spikes. The devastation of failure follows. Self-esteem sinks deeper,” licensed nutritionist Betsy Thurston said.

In today’s society, an unspoken competition arises among individuals to see who can eat the least. Classrooms, offices, and restaurants all bear a scoreboard based solely on calorie counts. Normalizing such dangerous behavior causes those who actually struggle with an eating disorder not to seek out help because “no one eats that much” and they feel normal. This behavior becomes more popularized every day and with teen brains soaking up heaps of new information, the dangers of undereating jeopardize this age group specifically.

The rise of “What I eat in a day” videos and 1,200 calorie diets further normalize under-eating when in reality, the average teenager should eat 2,200-2,800 calories per day depending on their gender and activity level. At a critical time for growth, undereating causes harmful consequences to a teen. If these videos do not normalize undereating, they showcase diets such as keto, raw foods diet, intermittent fasting, or vegan/vegetarian lifestyles. While these lifestyles do not pose harm to the majority of the people who partake in them, advertising these “perfect” ways of life to teens can cause them to feel negatively towards their normal diets. With the abundance of diets out there, teens become overwhelmed with the number of choices and this can cause them to choose a variety of diets in order to reap the benefits of all of them. 50% of girls and 25% of boys report going on diets in their teen years, and the toxic diet culture threatens to make those numbers rise.

With social media greatly contributing to the spread of information in today’s society, the skinny culture often popularized via Instagram, Twitter, Facebook, and Snapchat also adds to the normalization of limited eating. The comparison trap of social media leads teens to think, “Why can’t I look like them?” toward an already photoshopped, posed, brightened, and saturated image. 64% of Instagram users photoshop their photos regularly, and that number only rises with the follower count. Influencers put on a constant show in an attempt to exemplify their perfect life, however, to teen users on the apps these photoshopped/ingenuine photos hurt more than they help. 51% of the population have said that social media makes them feel more insecure and with teenage brains soaking up everything they see, their insecurities become more prevalent every day. With insecurities on the rise, teens search for ways they can achieve their favorite influencer’s body type, and extreme dieting or starvation shows up at the top of the list.

With TikTok and other social media algorithms showcasing & featuring size 00 as models, teens cannot help but envy their stick-like figure. While the majority of TikTok and other social media platforms entertain users through funny videos, interesting facts, and a plethora of other harmless content, they use algorithms in order to show the user their interests and keep them coming back. If a teen girl constantly stalks the size 00 girls on the apps, her feed will become full of diet and workout videos promising results. Unfortunately, these diet videos rarely show everything the individual eats and almost never show the proper amount of nutrition.

“You can’t avoid the comparisons. An addiction to comparisons is common. An addiction to body checking also results. The more you compare the more you over-check the body. You look in the mirror ten times a day, you focus on the tightness of your jeans, you stress about your next meal, you worry, and you become self-absorbed out of panic. Each social media post reinforces the inner sense of inadequacy and the urge to diet,” licensed nutritionist Betsy Thurston said.

Dieting and food restriction become a major problem especially when the influencers with such desired bodies post “What I Eat in a Day” videos, popularized on platforms like YouTube and TikTok. These videos pose major problems because what one person eats may not work for another person, depending on activity level, socioeconomic status, and weight. Along with this, “healthy” “What I Eat in a Day” videos can cause those who did not follow the general blueprint of those videos to feel guilty, even if what they ate sustained their body.

Adding to the social media comparison trap, day in my life videos captivate the younger audience and also pose a potential threat. These videos, often captioned with #productive, #successful, and more similar tags, showcase ultra-productive routines involving waking up at 5 am, working out twice, and eating only the healthiest of foods. They add another layer to “What I Eat in a Day”  videos by productivity shaming, while that is rarely the intent by the creator, viewers become consumed with guilt after lounging in bed while others went on their third run of the day.

Despite their growing popularity among the younger generation, “What I Eat in a Day” recaps have existed for years; tabloids covered the diets of models in the early 2000s, but searches for “What I Eat in a Day”  videos have risen significantly in the past few years. The popularity surrounding these videos sprouts out of the desire to imitate thinness, hence why diet videos by those of different body types do not go viral like the ones by size 00s. However, imitating a skinny person will not give the viewer the results they want or need. Clickbait titles like “I LOST 14 POUNDS IN ONE WEEK | FASTING” cause people to follow diet trends in the pursuit of losing weight quickly, not only an unsustainable method to lose weight but also potentially dangerous especially through means like fasting. Over one-half of teenage girls have tried extreme dieting to change the shape of their body, over one-third of which sustained a healthy weight originally. The toxicity revolving around food in today’s society creates a never-ending trap for easily influenced teenagers.

While starving oneself harms a person at any age, teens face higher risks. With already unstable hormones, not eating can subject teens to moodiness, emotional outbursts, and mild depression among other things. Despite the knowledge of these harmful effects, 42% of teens skip breakfast, and 47% skip lunch in an effort to lose weight. If students partake in these habits during the school year, they do not succeed as much in school,  fall asleep in class more often, and showcase more behavior problems towards teachers and staff.

“The teenage body is growing brain and bone cells exponentially.  Bones in particular don’t get a second chance to build. There’s a small window of time when bones are building and this is during the teen years. Inadequate nutrition will also make people irritable, unsatisfied and hungry if there’s a lack of protein or too much sugar,” Thurston said.

Along with the dangerous mental side effects, reckless food habits can lead to a number of physical side effects. These include skin problems and hair loss both of which can lead to heightened insecurity and pose teens to even more risk for falling into social media’s comparison trap. Besides the visible side effects, starvation can weaken the immune system which proves as more of a risk now than ever. Students get sick easier, pass it on to others easier, and suffer worse for a longer period of time. Those struggling through an eating disorder also happen to get colder easier which can distract in a school environment and cause students to not achieve success within their academics.

Social media, and the competitiveness within eating disorders, caused undereating to become normal throughout our society. However, positive creators across all platforms try to break that trend. Lexi Hidalgo (@lexxhildalgo on TikTok) breaks the stigma by posting realistic “What I Eat in a Day” videos where she shows herself not holding back from her cravings. Hidalgo also posts workout videos but in each one she encourages her viewers to drink water and eat a snack afterward. Her transparency on the TikTok platform inspires other creators and her viewers to avoid restricting themselves and love themselves regardless of what they ate. Brittani Lancaster, another TikTok creator (@brittanilancaster)  shares her daily meal intake in recovery from two eating disorders. Lancaster enlightens her audience by taking them on her journey to self-love and emphasizes that all of her viewers “have a beautiful body” while preaching the importance of balance. With positive examples like these already on platforms, hopefully, the toxic diet culture often found on social media will grow slim and social media will change to help users love themselves no matter what they eat.

One Response to “Eat.”