College in the Big Apple 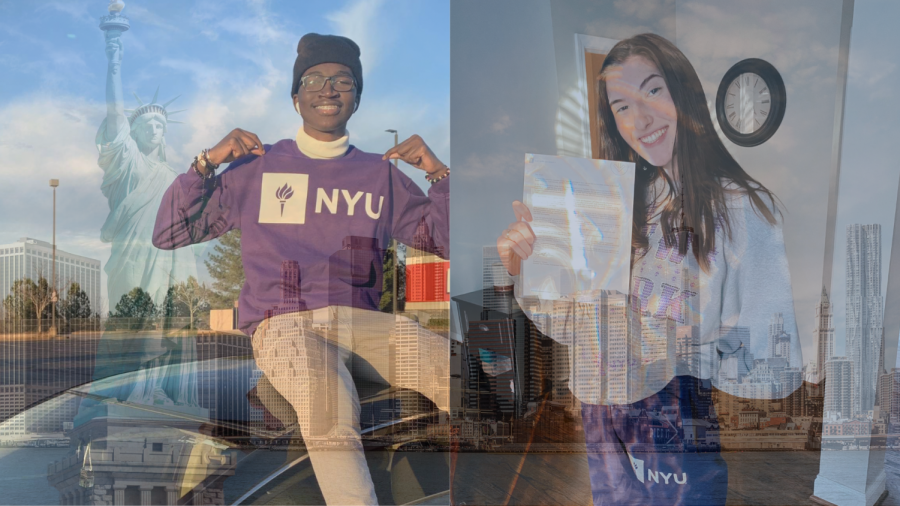 After finding out that in a few short months Magnet seniors Galaye Seck and Abbey Corley will make the journey to New York City for, at least, the next four years of their lives, both students felt pure joy and excitement for this next chapter. “The moment I found out I was accepted was one of the best feelings of my life. My mom and sister were on my side and it was a day of celebration for the whole family with lots of tears being shed,” said Seck.

After a stressful three years of high school, most students’ senior year acts as a relaxing final year before entering adulthood. For two NC Magnet seniors, after an exciting announcement from their dream schools in December, they can relax for their final semester knowing where they will spend their next four years.

Seniors Abbey Corley and Galaye Seck worked their entire lives towards the goal of heading to the Big Apple for college, specifically New York University. With a staggering acceptance rate of around 15 percent, NYU ranks as the 30th best university in the nation.

“NYU has some of the best opportunities of any school I have researched, from internships to study abroad, so I am really looking forward to taking advantage of these,” said Corley.

Both Seck and Corley applied to NYU’s Early Decision application pool, which binds accepted students to attend. It requires agreements signed by the applicant, parents, and school counselors to emphasize the level of commitment involved. Although this commitment does not fit all applicant’s best interest, for students that see NYU as their top school it provides them with a way to display interest, an earlier notification, and even a higher chance of acceptance.

Several aspects can steer students away from attending a school in the biggest city in the nation, including the distance and the out-of-state tuition.

“I am nervous about moving so far from all my family and friends so it definitely is bittersweet. But I’m excited to build new relationships and begin my journey to maximizing my potential. I have already connected with many people who are also going to NYU next year. I’m excited about a lot of things such as exploring the city and meeting diverse people from all four corners of the world,” said Seck.

When applying to the Early Decision application, students know that the tuition of a prestigious, private school will look different than one of a public, in-state university. Tuition can act as a stressor for families, but the opportunities and education could make up for the amount.

“I do think that spending more on a college degree is beneficial when attending such an honorable and prestigious university. The career prospects available for attending a rigorous institution are enormous and I’m confident in my future,” said Seck.

Despite the nerves, both Magnet students await an exciting future in New York City. After involvement in the International Studies program at NC, Seck plans to study in the NYU Stern School of Business and Corley will participate in the Liberal Studies Core program, both planning to continue to travel for education purposes.

“Moving to a new city with no family is scary, but I have been to New York before and I feel as if I will adjust nicely to the fast pace of life. I have already made some friends online and I can not wait to see what else is in store,” said Corley.