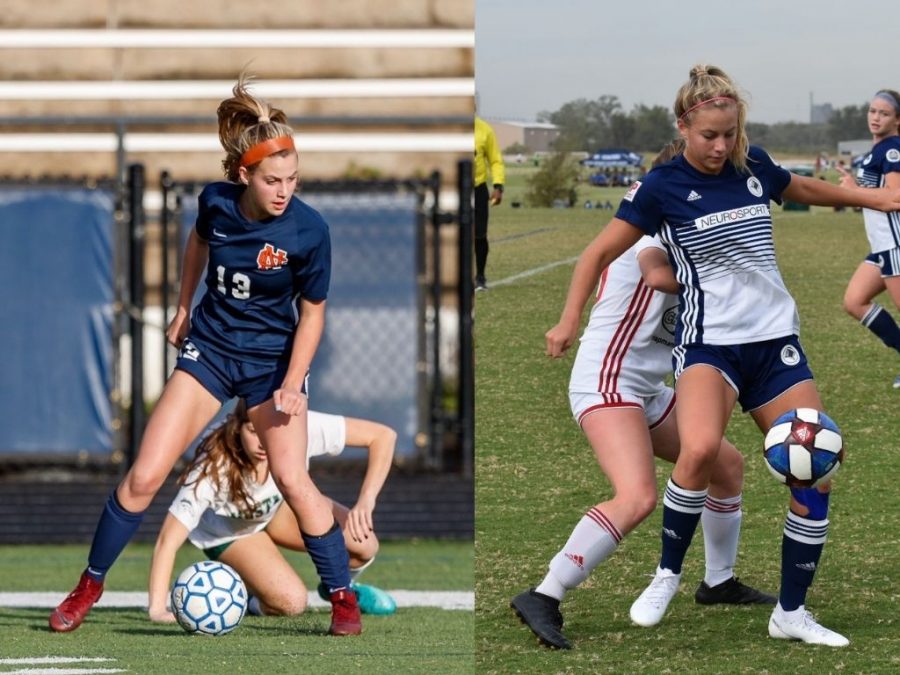 Kenna Armitage occupies the midfielder position for the NC Lady Warrior soccer team, but her passion for the sport sparked years before. Starting at a young age, she traveled across the country to compete in tournaments and showcases. Armitage plans on continuing her career at the collegiate level, fulfilling a lifelong goal. “I’ve always wanted to play in college and that is definitely what I’m planning on doing. I am hoping to commit somewhere soon and I’m looking forward to sharing it with my teammates at North Cobb,” Armitage said.

Juggling the demands of both academics and athletics in high school sports always poses a challenge to young athletes, but for one NC Magnet Warrior, the challenge could never seem so minuscule. Kenna Armitage, a junior midfielder on the NC Varsity soccer team, saw great success in 2020, and continued to carry this momentum into the new year. Following great achievements in both club play and showcases, Armitage received a spot on the GHSA 7A Soccer Player of the Year Watchlist and a nomination for the 7A All-State Soccer team. Despite these prestigious awards, the 2021 NC soccer team has plenty to prove this season.

“Being nominated for these awards and opportunities is definitely really special and crazy to me because there are so many great players in our region and state. It’s definitely made me feel pressured to do great this season but I also feel so motivated to earn those awards to prove that I deserve them,” Armitage said.

Armitage spent a majority of 2020 developing her talents and refining her game at showcases and camps. Along with playing for the Concorde ECNL club team, she participated in the SEAA (SouthEast All-American) Showcase, which featured the top talent from the South East. Armitage learned from experienced college coaches and interacted with new players from all walks of life. Though this could seem like a tough task, Armitage took this opportunity to strengthen her leadership abilities and sharpen her skills.

“Over the summer I played and trained in the SEAA Showcase, and it was so much fun getting to train with people from all over the South East. The showcase helped me become more confident on the ball and become more of a leader. A lot of people are shy when playing with people that they’ve never met so it definitely pushed me to take on that role of being a leader. At the showcase I was chosen as a captain for my team which was a big deal for me as a sophomore playing with seniors,” Armitage said.

With such high profile accolades and exposure, Armitage hopes to further her college recruitment and receive offers in the near future. Ever since her childhood, playing at the Division 1 (D1) level remained her top priority. If Armitage capitalizes her role on the NC soccer team, her dream could become a reality. Despite this, the COVID-19 pandemic took a significant toll on her recruiting over the course of 2020. Armitage witnessed a halt in not only her own recruiting but her teammates too.

“COVID has had a huge impact on recruiting, D1 schools can’t watch you in person or have you on campus until April which is almost a full year after the original date. Even though this has been super difficult, it’s pushed me to workout more on my own so that I can send coaches video of me,” Armitage said.

Outside of NC soccer, Armitage follows a tough schedule that consists of travel and other athletic events. Recently, Armitage qualified for the 7A Swim state championship, and balanced her soccer schedule with it. Not to mention, Armitage studies in the North Cobb Magnet International Studies program, boasting a 4.5 GPA. Though this rigorous agenda seems tiring to most, Armitage perseveres through it and lets it mold her game.

“Soccer season is always my favorite season, it keeps me busy and forces me to manage my time better. I am on the Concorde ECNL team and we usually practice 3 times a week, plus tournaments and games on the weekends. I am also on the swim team at North Cobb, so I have spent the last few weeks going to swim and soccer all week. There were some weeks I would have soccer and swim during the week, drive to Florida in a day, play 3 games in 1 weekend, drive home and do it all over again. It’s definitely tiring, but it keeps me motivated and in shape,” Armitage said.

As the 2021 girls Varsity soccer team opens their season, Armitage centers her focus on the task at hand and plans to let the future play out. After earning her spot as the team’s featured leader, the Warriors have plenty to prove and fight for. Make sure to check out your Lady Warrior soccer team and Kenna Armitage as they create their own path throughout the Spring season.

“I am super excited for this season at North Cobb! With our season being cut short last year, I am looking forward to getting out there again this season! North Cobb’s girls soccer has come a long way, and I’m so proud of the hard work my team has put in. I’d say our team is like the underdog, and I can’t wait to play this season and show everyone what we can do,” Armitage said.