NC Posse scholars will take the world by storm 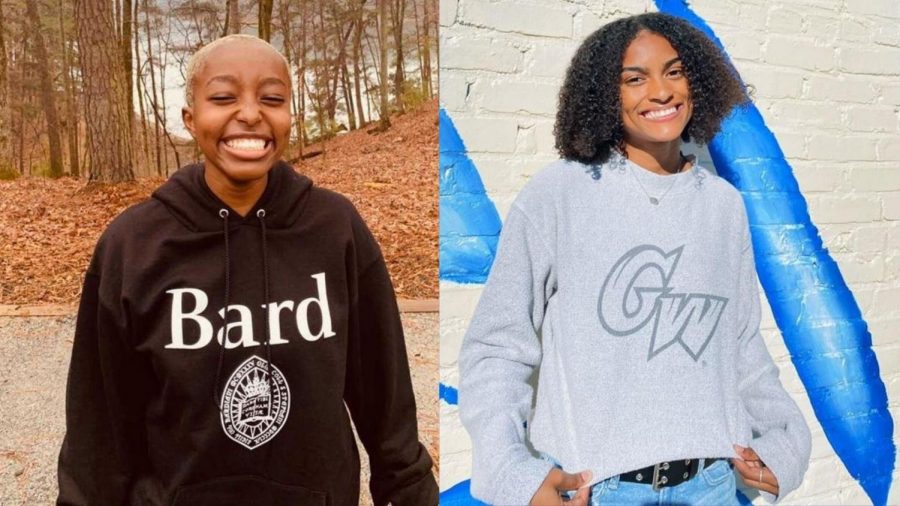 NC Magnet Warriors, Mayah Bourne and Ruth Njoroge, received the distinguished Posse scholarship. Filled with excitement about the experiences to come, the two look forward to beginning this new chapter. “Of course, I have enjoyed high school at NC, but I cannot wait to go into the real world and live in a city all alone. I’m a little nervous as the time gets closer, but I know it'll be such a great experience,” Bourne said.

NC Magnet seniors, Mayah Bourne and Ruth Njoroge recently received the Posse scholarship.  This service and leadership based scholarship partners with select schools to provide recipients from certain cities with full-tuition for four years. Posse receives funding from several means, such as donations and grants, as a non-profit organization.  In the fall, Bourne will attend the George Washington University in Washington D.C., and Njoroge will attend Bard College in New York.

“The Posse scholarship means a lot to me because I have the opportunity to represent my high school and family in such a large and important city as Washington D.C. I am really excited to meet everyone who attends the university through the Posse program and continue to grow as a leader in my training,” Bourne said.

Awarded by the Posse Foundation, the Posse scholarship aims to ensure that universities obtain a diverse population of qualified applicants from all backgrounds. The scholarship allows applicants to complete their education equipped with skills and the leadership needed for success. It provides guidance to students in the form of mentorship and support as they pursue future endeavors, making a difference in their community along the way. However, students must receive a nomination and undergo various interview stages before earning the distinction of a Posse scholar.

“It was a very spiritual process for me as it really taught me to trust God and the plans he has for me. I was extremely nervous and anxious most of the time, but my family, friends, and Posse staff made me feel calm and extremely comfortable. In the moment, everything felt like it was taking forever, but now looking back it all happened so quickly,” Njoroge said.

Although the multiple interviews and lengthy response windows brought on nerves, doubt, and numerous emotions, Bourne and Njoroge both deem it well worth it. Everything over the past four years, taking rigorous classes, countless late nights, building strong connections, and even failures, ultimately led up to this point. Becoming a Posse scholar means a great deal to Njoroge, Bourne, and their families.

“This honestly means everything not only to me but to my family as well. Becoming educated and having the opportunity to attend one of the top institutions in the country is humbling. My parents gave up everything in Kenya just so I would have the opportunity to go to school, better my life, and be happy. I’ve seen my parents work and put all their effort into raising me, so I can have access to opportunities that have made me into who I am. My parents planted a seed of hard work and perseverance in me, and this scholarship is the fruit and a testament of that,” Njoroge said.

Outside of the classroom, the two possess several diverse interests as well. Along with playing Varsity soccer for four years, Bourne loves everything music and art related. Originally from Kenya, Njoroge also loves art and learning about the world around her. They hope these passions and traits will continue to grow as they move on to college.

Bourne and Njoroge feel excited and hopeful about their upcoming college experiences. Bourne plans to major in exercise science with a pre-medicine concentration. Planning to study art, Njoroge intends to pursue her interests in diplomatic work as well. She aspires to advance educational opportunities for young children in less developed countries.

“I taught Ruth two years ago when she was a sophomore.  She was a good student and only really spoke when she had something to say.  When I read what she had been doing in the two years since I taught her, she was telling everyone who she was by how she used her spare time.  She’s very involved in charity and helping the less fortunate.  She’s going on to do great things,” NC math teacher Hilary Armstrong said.

“Working with Posse has been so rewarding and fun, and I have grown to love the program more each day. To other highschoolers hoping to get the Posse scholarship, I would encourage them to be confident in themselves and their abilities. If you set your mind and heart to accomplishing something, it is extremely attainable,” Bourne said.