Weird or worth it? Wandvision review 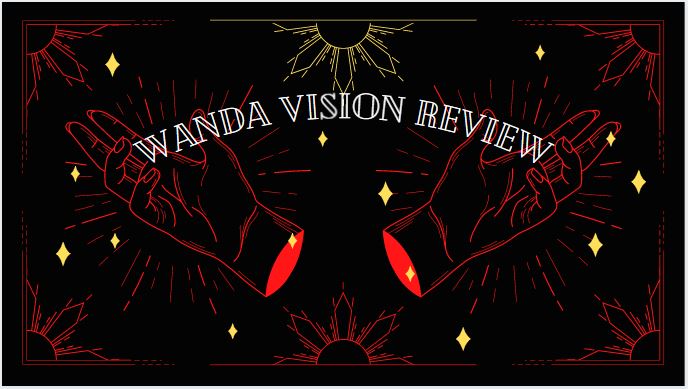 Wandavision tells an odd yet intriguing story of love and mystery centered around ex-avengers Wanda Maximoff, aka Scarlet Witch, and her android husband, Vision. The series starts off the MCU’s outreach into television with a bang as audiences praise the show.

The Marvel Cinematic Universe’s (MCU) first foray into television starts off with a bang as fans praise the new Wandavision series on Disney Plus. The new series marks the first Marvel property to debut since Spider-Man: Far From Home in 2019 and the first of twelve planned shows starring fan-favorite characters from the MCU. These upcoming shows include occult characters such as Moonknight while also shining a light on some comic classics like She-Hulk and Mrs. Marvel. Wandavision serves as a taste for what’s to come and holds plenty of promise for the future of the MCU.

The plot of the show centers around Wanda, aka Scarlet Witch, and Vision as they attempt to live a normal suburban life. Their unique abilities and appearances make this difficult, however, as they do not want their neighbors to recognize their superhuman nature. Conflict arises, however, when Wanda begins to realize flaws in the world and people around them that add a deeply surreal feeling to the show.

The surreal feeling finds reinforcement in the first few episodes of the show which take on a unique format. The show begins in black and white, but with each installment the era of the setting changes, and with that the style of the episode format itself. Episode one possesses a setting not dissimilar from I Love Lucy, even going as far as having the married couple sleep in separate beds. However, the second episode progresses into 60’s television, and while still black and white it adopts more characteristics of shows like Bewitched, from which the show draws a lot of inspiration from. This storytelling format adds depth to the mystery early on and only adds to their weirdness of the show.

Speaking of weirdness, the show does possess quite a few quirks that viewers would find befitting of a show about a super-powered Witch married to an android. On top of the shift from one television era to another between episodes, the plots for each episode can hold an outlandish, charming, and deeply unsettling quality which once again assists the surreal narrative the series attempts to tell about Wanda’s reality breaking powers.

“Wandavision is a branch off of Marvel’s typical style of show, yet it has managed to stand up to the criticism it received from its first few episodes. It is definitely a step in a  new direction at the very least,” junior Gavin Williams said.

Wandavision offers a little of something to any viewer no matter their taste. The odd and endearing romance that unfolds between the two leads will undoubtedly grab the attention of any hopeless romantic, while the strange mystery and otherworldly occurrences, which just seem to keep building and building, will attract anyone looking for a show that feels different from other currently running series. The show looks like it will only get weirder as we cross the midpoint of the story. With four episodes left and so much still unknown, a potential viewer would find no better time than now to begin watching. And if Wandavision does not sound like your kind of show, expect others to debut soon as The Falcon and the Winter Soldier possess a scheduled release date of March 19, 2021.