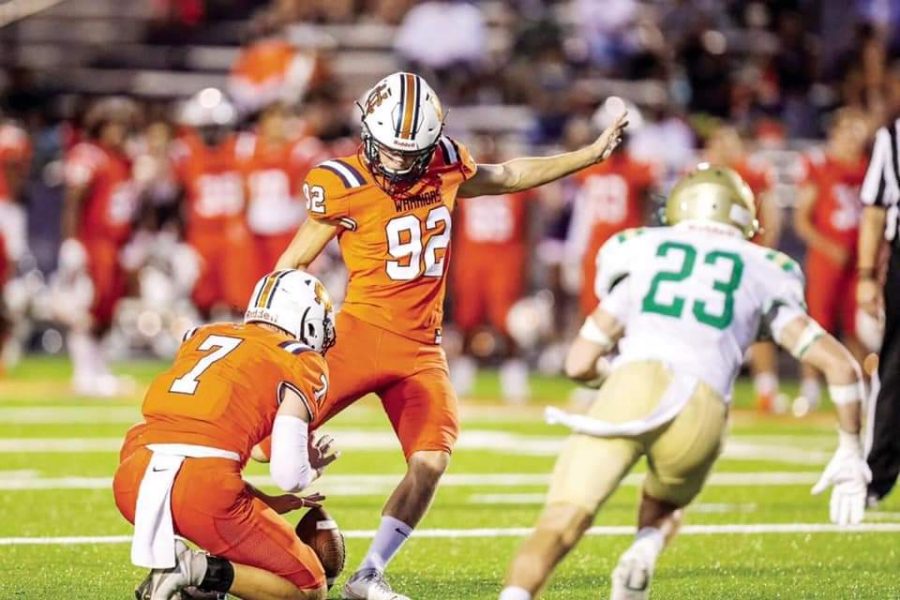 NC senior, Ben Moran, committed to play football for KSU. While at NC, Moran made friendships on the team that will last a lifetime. “They’re like my brothers, I love each and every one of them,” Moran said. And while he prepares to move on, his memories of high-school football will stay with him forever.

NC Senior and Varsity kicker, Ben Moran, embraces the first step toward his future. He committed to Kennesaw State University, and will kick for their football team following graduation. KSU prides themselves on their Division 1 status and participates in the FCS (Football Championship Series) program. KSU competes in the ASUN conference and holds many opportunities for athletes to excel. The team won 2 past titles, in 2017 and 2018, at the Big South Conference at the NCAA division.

Moran began kicking for NC’s football team as a junior. Before joining the football team, he played soccer for numerous years. While kicking a soccer ball one day after school, NC head football coach, Coach Queen asked him to kick a couple of footballs.

“If Coach Queen tells you to play football, you play football. And that’s one of the best things that ever happened to me,” Moran said.

Since coming to NC freshman year, Moran made an abundance of friends, and doesn’t want to say goodbye. Moran enjoys lifting, working out, and eating pre-game meals with his teammates; all activities that he will miss dearly when he moves on to KSU’s locker room. But, moving on creates a bittersweet feeling, and Moran excitedly anticipates what will come next.

Over the last two years, Moran made great improvements, and he will continue to push himself to reach his full potential. The school will miss a great kicker, a good teammate, and a kind friend. Ben loves to support  anyone who needs a hand, and will always listen to what you need to say no matter the topic.

“My favorite things about him are how he puts the needs of everyone else above his and he is always honest with you,” NC senior and close friend to Moran, Reagan Sorrell said.

Moran looks forward to bringing his talents to a competitive team that’s earned three consecutive berths in the NCAA Division 1 FCS playoffs. He urges anyone who considers joining the football team to try-out sooner than later, don’t wait. The team welcomes new members as the search for talented athletes will never end.

“It’s never too late to get started, but I recommend starting as soon as possible. Because trust me, the two years I played have gone by too fast,” Moran Said.

The sooner students can talk to a coach about playing, the better. If students want to play football next semester, they should contact Coach Queen for further details.