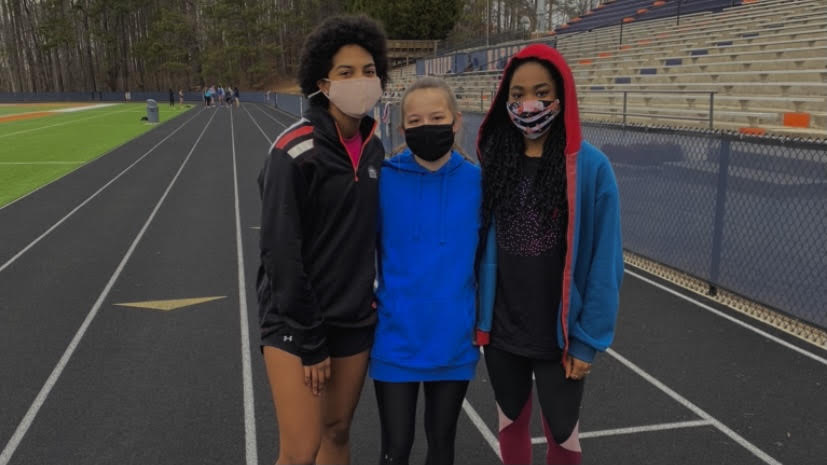 After an early end to the 2020 NC Warrior track and field season, the athletes return and in high hopes of a great season. Various athletes play other sports and use running track as extra workouts to improve strength and endurance. As a team, they plan to run their fastest and win as many meets as they can this season.

After the unexpected end of the 2020 track season, the NC Warrior track and field team returned for a more hopeful 2021 season. A crucial part of a track athletes’ performance. During the preseason, athletes do sets of sprint drills, jumping drills, and other workouts that help prepare them for their performance on the track during actual meets. The preseason conditioning started on January 11 and the scheduled season started on March 3. Due to the COVID-19 pandemic, athletes wear masks and take proper precautions. For example, if one catches a fever, cough, or cold they stay home.

The coaches all came together to train these athletes by giving workout “homework”  consisting of numerous tips for skill improvement to prepare for the upcoming season. Every weekday athletes dedicate hours of their free time to pursue success in their sport. The preseason conditioning puts athletes who choose to participate ahead of those who join at the beginning of the season in early March.

“I hope to improve my endurance for soccer this season and make myself a better athlete in general. I hope as a team we develop and become closer. Our goal is to run our fastest and win as many meets as possible,” junior 400-meter runner Jordan Karim said

The workouts usually consist of running a lap around the 400-meter track and then a couple of 50-meter sprints. The athletes then go on to their different events and refine their skills. The jumpers go practice their jump techniques while sprinters go work on stamina and strength. The coaches dedicate days to building core strength and leg muscles.

As a whole, the preseason brings out the dedication in athletes and improves strength, and since the previous season ended on an urgent note, the coaching staff strives for a prosperous season this year.  Both the coaches and players expect great things from the athletes this year.

“I PR’d by 27 and the coach said everyone did very well. It felt great being back out there and racing kids from other schools. The competition was tough but as a team, we powered through it,” junior distance specialist Ngere Kinyanjui said.

Following the preseason conditioning and practices, the NC Warrior track team competed in their first track meet of the year. The Warriors traveled to Lassiter High School on March 4, and put their hard work into play. Both the boys and girls team impressed the coaching staff and started their individual seasons off strong. Make sure to catch the Warriors as they compete at Kennesaw Mountain High School on March 10.