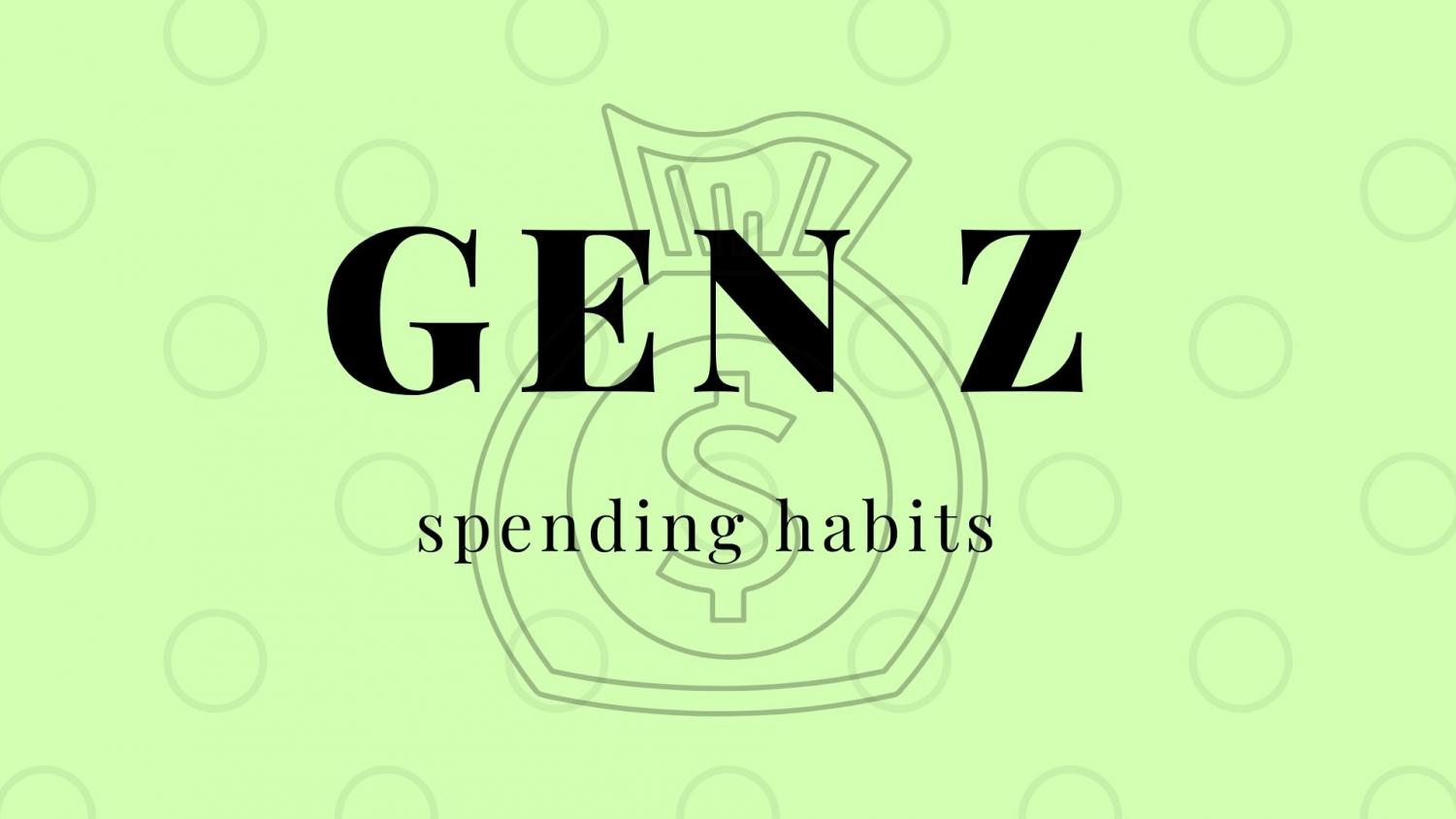 Generation Z, an extremely unique generation, acquired spending habits based off of the technology that surrounds them. Unlike previous generations, Gen Z relies on technology and new innovations to guide them towards their next purchase. (Elyssa Abbott)

Generation Z, an extremely unique generation, acquired spending habits based off of the technology that surrounds them. Unlike previous generations, Gen Z relies on technology and new innovations to guide them towards their next purchase.

Technology has dominated the entirety of Generation Z’s life thus far, which spurred a trend of instant gratification in teenagers. Teens know that through companies like Amazon the object of their desire can show up on their doorstep the next morning. Growing up in this environment led to a sensitivity to slow service and higher quality, which typically means higher price tag. According to Lexington Law, teens spend on average $2,150 a year, despite 47 percent  of this same age group feeling concerned for paying for items in their future, such as college. Why should teens save money? Why do not more teens save money? How do you save money?

Millennials, recently declared America’s largest generation, set an example for generations to come, mainly Generation Z. Dubbed with the stereotype of lazy and still living at home, the average millennial carries around almost $5,000 in credit card debt, not to mention student loans. The unsettling statistics continue with 50 percent of millennials facing delayed home buying due to student loan debt, 56 percent without a retirement savings account, and 56 percent living paycheck to paycheck.

“I find it pretty scary how quick people are to borrow money without really thinking about when or how they are going to pay it back. I feel like I am a good saver in general besides spending money on necessities, like food and gas. Seeing the holes people can dig themselves into by not having any kind of savings account just makes me want to save as much as I can,” said senior Toby Fletcher.

Already, 30 percent of 18-24 year olds hold some form of credit card debt, but Generation Z spending habits look promising for the future. Almost 70 percent implement budgeting into their day to day routine to combat debt and plan for the future. Thanks to their digital savviness, budgeting apps and online resources pose no threat to them, but this excessive information can become overwhelming. Forbes evaluated the spending power of Generation Z, their level of financial influence and amount contributed to the economy, reached $143 billion in 2018. This leads businesses to cater towards this group of spenders by making products attractive to the specific characteristics of the generation: technologically advanced, streamlined, and futuristic.

Pew Research Center says that Generation Z will rank as the most well-educated generation thus far, but anxiety arises when navigating when and when not to spend money. Luckily, compared to other generations, Z’ers do not feel overwhelmed with debt, yet, possibly due to their short time spent in adulthood or because of their lack of motivation to begin retirement saving or credit history building. Unsurprisingly, Generation Z prefers and feels at ease with dealing with finances via online bakings, apps, and through technology. Teens tend to delay thinking about finances until mid to post-graduation, but it does not hurt to start planning a future with goals for financial literacy and stability.

Finding a job, even a part-time job, an important step for teenagers, helps them  plan for their futures and take responsibility. Of course, sports, academics, and extracurriculars typically take up the majority of a high schoolers time, but odd jobs or gigs, such as DoorDash, provide a relatively easy way to earn a bit of extra money. Understanding a paycheck can make it easy to allocate the money earned to different accounts and goals. Establishing an allocation amount allows teenagers to put their money towards good use. The 50/30/20 rule stands as a general allocation strategy that many use, although people can alter the rule to fit the individual needs of the person. It advises individuals to spend 50 percent on their needs, bills, food, gas, and recurring payments. Then, it encourages setting aside only 30 percent for wants, which can include eating out, entertainment, or an item you saved up to purchase. The remaining 20 percent should live in a designated savings account, not a checking account. Distinguishing the differences between savings and checking allows teenagers to not spend their savings and earn, even a little, interest. For teens specifically, on average they do not typically need to allocate money towards bills, which means this could cut down the percentage and increase the savings instead. For each month or two weeks, depending on payment frequency, apps and tracking can help to break down expenses further into categories. If you realize that eating out ate a large chunk of the paycheck, put aside a small amount towards this category and stick to it.

Arguably one of the best financial apps and companies, Mint through Intuit, allows users to check their accounts, create budgets, and work towards saving goals. It also included a feature that explains investing and allows users to invest through the app. The best part? The entire app comes at no cost to users, making it ideal for Generation Z. When teens do establish a credit history, Mint will display your current credit score as well.

Every teen’s situation and future looks different, but learning about budgeting can make a world of difference for a stable financial position. For NC senior Caris Todd, her financial situation looks much different than most other students. When she turned 18 this past year, she received an amount of money that she gained responsibility for, but through her hard work in school she graduated a semester early and jump started her financial future.

“I got a different bank account for the money I gained access to last year, so that it will be easier not to touch it. I also got a job for the semester until college, so that I can keep the money and use it for an investment, like a down payment on a house when I am out of college. I use my work money strictly for needs and spending money, but I still save half of it and put it in the other account,” said Todd.

Todd made a goal to save money and can live financially independent throughout college, while paying for school herself. Other NC seniors made similar goals to save up as much money as possible to enter college with a cushion, but with all of the wants in today’s society, not spending money on clothes and other items can prove difficult.

“I try to save about two-thirds of each paycheck as part of my college savings and the rest I spend on things like gas or entertainment. Of course, I do waste money on things like coffee or clothes that I do not necessarily need, without realizing how quick it adds up,” said senior Skylar Chan.

Influencers on YouTube and Instagram often live flashy lives to entertain their viewers, but two in particular actually use their platform to educate individuals on the importance of saving money. Tori Desimone, a 22 year old influencer and entrepreneur, opened up her own fitness studio and took a step back from her YouTube channel. The reason her dream to open up a fitness studio became possible attributes to her parents. At the age of 10, her parents opened up a Roth IRA for her to begin saving for retirement. Her parents also encouraged Desimone to begin saving her earnings from YouTube and led her to buy her first home and open her cycle studio with two locations at the age of 20. Graham Stephan, another influencer that made waves on the internet with his financial videos, boasts 2.2 million subscribers. He advocates a “stingy” lifestyle and, despite $6.5 million net worth, lives by this strict way of living. At the age of 18, he began studying to obtain his real estate license and started earning commission off of selling homes. You may recognize him from the hit Netflix show, Selling Sunset. Although not a major character on the show, he does sell luxury homes for the Oppenheim Group in Los Angeles, California. He also owns several rental homes and prides himself in his investing knowledge. His dedication to his passions paid off through his massive success, while still maintaining his extremely frugal lifestyle.

No matter the circumstance, beginning a journey in finance does not mean you need to start with massive amounts of money. The most important step consists of educating yourself and making a solid plan for the future, whether it includes reading about investing or starting a savings account. A step towards financial knowledge means a step towards independence and stability.