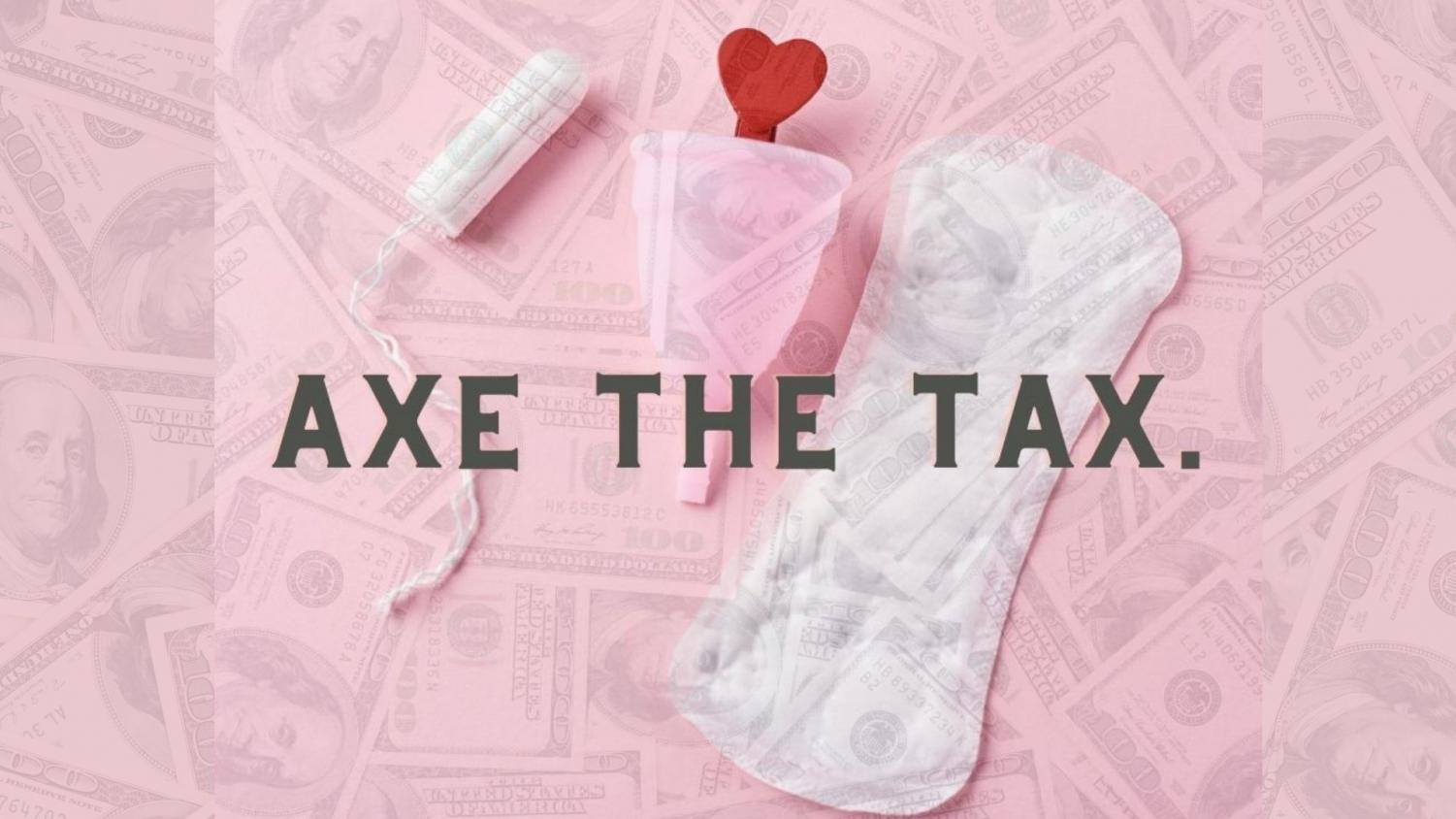 Menstruation serves as a natural process experienced by women throughout the world. Menstruation products remain essential goods purchased by women across the world. Despite the necessity of these products America’s government profits from feminine products through the enforcement of the pink and tampon taxes. (Amber Roldan)

Menstruation serves as a natural process experienced by women throughout the world. Menstruation products remain essential goods purchased by women across the world. Despite the necessity of these products America’s government profits from feminine products through the enforcement of the pink and tampon taxes.

The pink tax embodies a term coined for gender-based pricing resulting in an upcharge of women’s hygiene products, feminine products, and any other product targeted towards women. This sexist discrepancy flourishes due to the necessity of purchasing women’s health products, with feminine hygiene products including pads, tampons, and menstrual cups constituting a large portion of revenue generated by the pink tax.

Since men do not experience menstruation, their budgets do not need to include extra funds for these hygienic items. Aside from period products women often find themselves paying more than male peers for everyday items. Forbes revealed that women annually spend $1,351 more than men on the same products. This absurdity infuriates women in every corner of the world because menstruation remains inevitable.

Menstruation resembles a natural process experienced by everyone with a uterus. Across the globe, the average woman menstruates from puberty to menopause. With a global population including 3.82 billion females, nearly half of the world experiences menstruation at some point during their lifetime. Once a month, womens’ uterine lining sheds if a fertilized egg ceases to emerge. This loss in tissue results in monthly bleeding that occurs during one’s period. Despite the ubiquity of menstruation, stigmas and taxation surround the controversial subject.

“The concept of blood is never spoken about because people are uneasy around it. But the thing is, having your period is natural. I hate how elementary schools promote the stigma around menstruation at such a young age. Boys and girls should not be split up when taught about puberty, everyone needs to be educated on the menstrual cycle,” NC junior Kiana Hawley said.

Females start paying the price of the pink tax as soon as they enter the world. Every first-time parent will attest to the fact that copious amounts of diapers constitute a necessity for newborns. When mom realizes she ran out of diapers for her new baby girl, she sends dad out for a late-night diaper run. Dad, still groggy from being abruptly awoken at 3 a.m., drives to Walmart barely able to keep his eyes open. As Dad stumbles into the diaper section he grabs the first pack of diapers he sees, with pink packaging boasting a smiling little girl. Unbeknown to Dad, he just paid extra for choosing the pink diaper packaging as opposed to the blue packaged one next to it.

Girls do not escape the pink tax once they outgrow diapers. The sexist tax follows them down the toy aisle as they pick out their first barbie doll; toys advertised for young girls typically possess higher prices than toys aimed at young male demographics.

Globally, out of 195 recognized countries, Scotland remains the only country to provide its menstruating citizens with free feminine products. The Period Products (Free Provision) (Scotland) Bill ensures that feminine hygiene products become available and attainable in public places including schools, universities, and markets. Women around the world envy Scotland and hope to follow in its lead. Protests and social media campaigns fight for free menstruation products as monthly bleeding due to the shedding of one’s uterine lining remains out of a woman’s control.

The pink tax preys on women in many aspects of life when venturing outside of the realm of hygiene products. Two Chicago economists revealed that women endure higher car quotes more often than men. This trivial discrepancy revolves around the stereotype that women possess little to no information about cars and therefore can succumb to exploitation.

“I was looking to trade in my car and walked into the car dealership, I went in and I had already done a certain amount of research, I knew I wanted a Jeep but was open to discussing color. I knew what features I wanted and I knew what price I wanted to pay. After test driving my car and deciding on the color the car salesman asked me if I wanted to put $1,000 down. I said no because typically putting $1,000 down on a lease only takes about $20 off of the monthly payment. So, I wouldn’t get the thousand dollars back by the end of my lease. He was shocked that I understood what he was saying. We finalized all the finances but the day I came back to pick up the car everything went wrong. I was walking out of my door and the salesman calls and says, ‘Hey there’s an issue with the financing we need you to bring $1,000 to the table, something went wrong with the numbers’. When I told him no because that was not a part of the original deal, he informed me that my father had beaten me to the dealership and suggested that I speak with him before declining. I refused the offer and did not end up purchasing a car. The car salesman ended up calling me back a couple of weeks later. He confessed that the $1000 was not needed to complete the deal. As a woman, I know what the assumption might be when I walk into certain places, but being taken advantage of at the car dealership reminded me to make sure to be an educated buyer, it just reminded me to know my numbers [and] know what I am willing to pay for something. I know that unfortunately as a woman there are certain things like cars and houses that people will try to charge me more for,” NC math teacher Brenda Slater said.

The effects of the pink tax and tampon tax in America remain an undeniable issue affecting millions of Americans. The New York City Department of Consumer Affairs (DCA) discerned that female products typically cost 7 percent more than products targeted towards men. The DCA also proved that 42 percent of the time, women pay more for their products when compared to male peers. No matter how hard one tries to combat taxes singling out women, no one with a uterus can escape the wrath of unjust taxation. In an effort to weaken the prejudiced grip of taxation women can purchase gender-neutral hygiene products to avoid an unjust upcharge.

Ultimately, awareness remains the only way to stand up to taxation and evoke change. Disassembling years of gender discrimination can only take place with the help of women across the country. Starting conversations about the fallacies surrounding taxes targeting women allows America to begin working on rebuilding a broken society damaged by misogynistic taxes. Period.