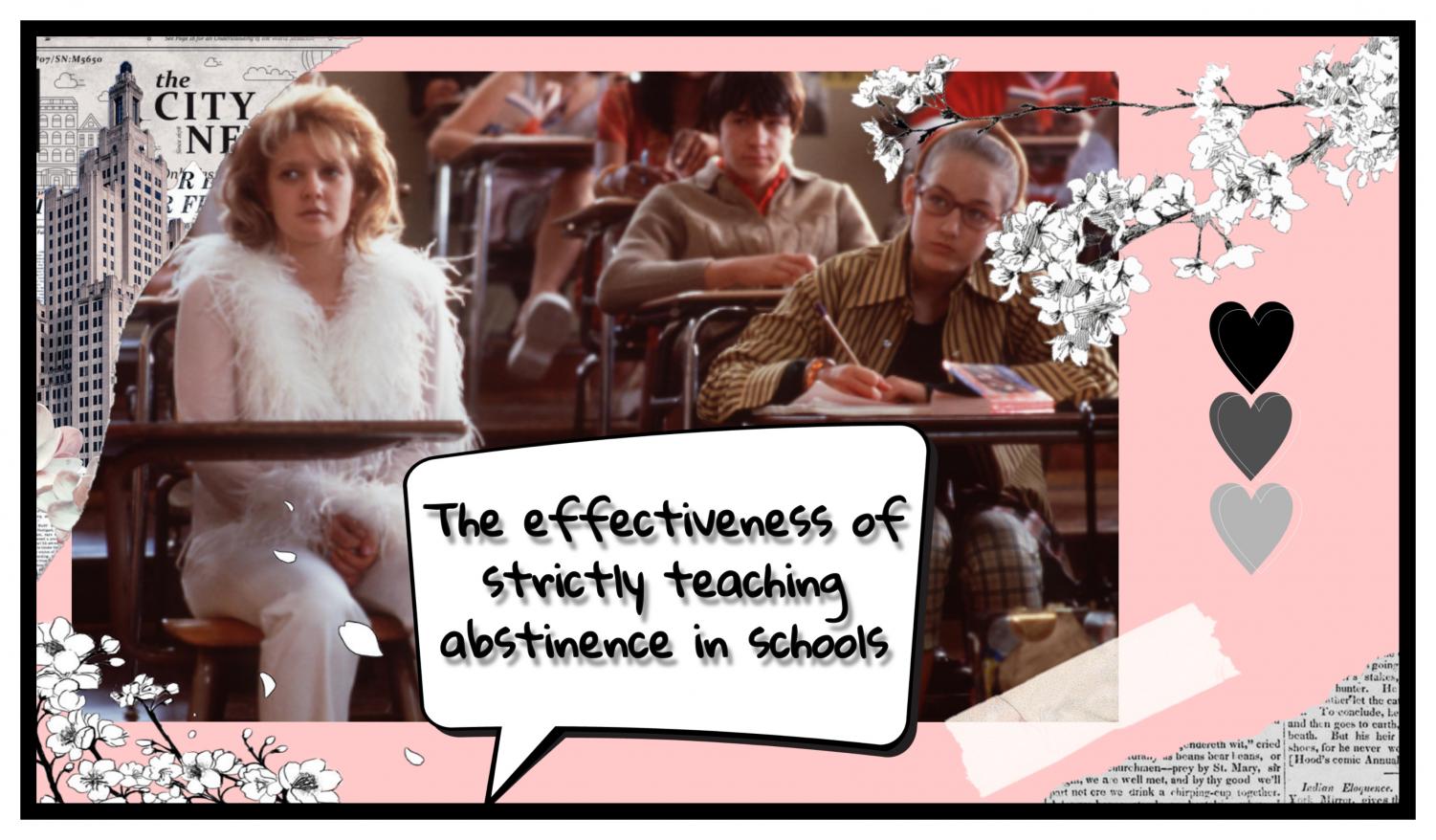 Caption: Schools all over the United States teach abstinence from sex and drugs. While abstinence seems the ideal way to keep students safe, no educator can guarantee that teenagers will stay true to their pledges. In order to remain proactive and well-equipped, schools should consider providing students with the honest medical information they need to protect themselves in the event that they deny abstinence. Otherwise, student will never acquire real safety tips surrounding sex and drugs. (Hannah Cuthbertson)

Caption: Schools all over the United States teach abstinence from sex and drugs. While abstinence seems the ideal way to keep students safe, no educator can guarantee that teenagers will stay true to their pledges. In order to remain proactive and well-equipped, schools should consider providing students with the honest medical information they need to protect themselves in the event that they deny abstinence. Otherwise, student will never acquire real safety tips surrounding sex and drugs.

The effectiveness of strictly teaching abstinence in schools

School’s across the globe hold the responsibility of teaching students what they need to know in order to navigate life. And while academics hold importance, students should learn other things in order to become successful. Anyone who made it through middle school remembers red ribbon week and pledging to never do drugs, as well as the awkward sex education talks with the physical education teacher who clearly wanted to do anything else.

In a 2019 study conducted by the Centers for Disease control and prevention (CDC) on teen birth rate, Georgia ranked 14th on the list of states with the highest teen birth rates. The top 10 spots belonged to Arkansas, Mississippi, Louisiana, Oklahoma, Alabama, West Virginia, Kentucky, New Mexico, Texas, and Tennessee. Looking back at the article posted by ThoughtCo, those 10 states require discussing or stressing abstinence in their sex-ed curriculum, while only three require the teaching of contraception (Alabama, West Virginia, and New Mexico). As well as, three of those states do not possess a sex-education or HIV mandate at all (Arkansas, Louisiana, and Texas). While correlation does not always equate to causation, one should notice the patterns between only teaching abstinence versus including contraception.

“[Sex-ed] includes teaching not only about abstinence, but also contraception, including emergency contraception; reproductive choice; lesbian, gay, bisexual, transgender (LGBT), and questioning issues; as well as, of course, anatomy; development; puberty; relationships; and all of the other issues one would expect to be covered in a traditional sexuality education class. Furthermore, comprehensive sexuality education should be science-based and medically accurate,” American Bar Association (ABA)  said.

While teaching abstinence can help some students make the right decision for themselves, other students may continue to partake in sexual activities. No sex education teacher can guarantee that every student will walk away from the class ready to pledge their life to abstinence. Educators should realistically assume that high school students may have sex. Those students should know the risks, how to use birth control and other contraceptives, and how to properly take care of their bodies from a medical standpoint.

“High schoolers as a whole don’t always follow the rules. So I think teaching them how not to have a baby would be more effective than just telling them to be abstinent,” sophomore Malcolm Anglin said.

As well as, teaching abstinence usually focuses on preventing teen pregnancy. This completely disregards students who identify as part of the LGBTQ+ community. While same-sex couples cannot get pregnant, they can still distribute harmful STD’s; those of which certain contraceptives can prevent. States who only focus on abstinence and do not talk about the use of contraceptives put their LGBTQ+ youth at a high risk for developing an STD. According to the CDC, young, gay and bisexual men accounted for 8 out of 10 HIV diagnones among youth in 2014.

“The need to support comprehensive sexuality education over abstinence-only-until-marriage programs should not be about political gamesmanship or the culture wars, although, too often, it appears that it is. Instead, the focus should be on providing young people and the most affected members of society with the tools and information they need to protect themselves, their health, and their future,” ABA said.

Furthermore, schools also teach abstinence from drugs. While educators should always encourage students to stay away from drugs, deeper conversation around the topic may save lives. As part of a new project in the state of Alabama; school teachers, coaches, administrators, and other staff members will begin training on how to treat students suffering from a drug overdose. Originally, school nurses received training to administer overdose treatment, but schools begin to wonder if training all staff members will produce a better and more efficient outcome.

“For US teaching staff, the training could become another standard procedure, like shooting drills,” British Broadcasting Channel (BBC) news said.

As the opioid epidemic spirals nationwide, so do overdose rates. According to the CDC, over 81,000 people died in the United States from a drug overdose in the year 2020 (the twelve-month period ending in May), becoming the highest number of overdose deaths ever recorded within a twelve-month period. If teachers and staff members knew what to do in the situation that a student overdoses, schools could save more lives. As well as, if students and staff members received education on what drug use/drug overdoses look like rather than simply pledging to avoid them, they could better identify drug abuse and provide help to students struggling with addictions.

Pledging to avoid something does not take away the problem, instead it creates a false sense of comfort. The hope that students will refrain from sexual activities or experimenting with drugs remains ideal rather than realistic. Every student possesses their own individual thoughts, and teenagers cannot always make good decisions for themselves, since that part of the brain continues to develop until humans reach a much older age.

“The frontal lobes, home to key components of the neural circuitry underlying ‘“executive functions”’ such as planning, working memory, and impulse control, are among the last areas of the brain to mature; they may not be fully developed until halfway through the third decade of life,” National Center for Biotechnology Information (NCBI) said.

With that fact in mind, schools should explore the concept of abstinence and evaluate how much they should trust teenagers to commit to it. While some students may find abstinence speeches motivating, schools should provide every student with honest medical advice. This will allow them to obtain more knowledge surrounding the safety of themselves and their peers in the event that they deny abstinence from sex or drugs.