In today’s world, the music scene runs pop culture and influences people all around the world. Majority of consumers in the music industry easily recognize the most mainstream faces in music, such as Drake and Justin Bieber. Though artists similar to these rack in millions and in select cases billions of streams, they all started off as ‘‘small artists”. In order to preserve this dream for future aspiring artists to reach, mainstream artists must stick with their record labels to help further expand others careers. (Peyton Stack)

In today’s world, the music scene runs pop culture and influences people all around the world. Majority of consumers in the music industry easily recognize the most mainstream faces in music, such as Drake and Justin Bieber. Though artists similar to these rack in millions and in select cases billions of streams, they all started off as ‘‘small artists”. In order to preserve this dream for future aspiring artists to reach, mainstream artists must stick with their record labels to help further expand others careers.

The unknown truth behind the music industry and independent artists

As the quality of music in today’s world continues to improve, the attention and viewership surrounding it directly correlates. Unlike decades prior, any and everyone can independently create and release their own music, altering how the music industry operates. Due to this, people of all origins and locations flocked to the “universal language”, in hope to establish themselves in the billion dollar industry. 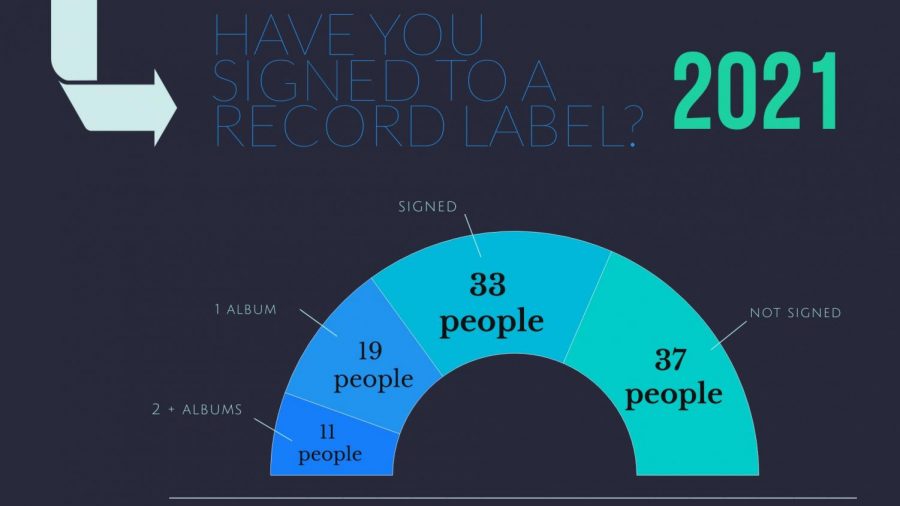 “Throughout this whole pandemic and really the past 2 years, I’ve listened to a lot more music. I feel like this trend is pretty common with the majority of people too, which is why music is so prevalent in pop culture today. I listen to artists who are viewed as commercial artists, but I also listen to small ones too, which I think is a unique factor of the music scene today,” NC junior band member Lorenzo Alarcon said.

In fact, the recorded music industry brought in over 21.5 billion U.S. dollars in 2019, with streaming taking up 56 percent of this figure (11.9 billion dollars globally). The predominant reason for this spike lies in the heart and soul of the modern music scene: independent artists. Public streaming services such as Soundcloud and Bandcamp provide platforms for people of all experience to upload their music too. With more artists producing music and an increased number of ears wanting to hear these tunes, comes the commercial aspect of it. Record labels quickly attach themselves to the independent movement and the faces behind it, trying their best to sign the hottest artists in the world. To the majority of people, this idea sounds amazing. People can write, produce, play, and release their own music from the comfort of their own home, and potentially sign with a major record company. Despite this, select artists choose to control their own product and maintain their independence through the power of social media and globalized reach.

“I think that independent artists have a lot of freedom to do exactly what they want. They’re not under any limitations and dont need anyone else’s approval. They get to express their creative vision without having to be accepted by anyone else. While signed artists can typically have quicker growth and better access to other artists. There’s definitely pros and cons to both, but personally I prefer to stay independent because of the wide variety of opportunities,” NC junior Bentley Huff said.

Huff, similar to artists such as Kota the Friend and Felly, opted to remain independent to keep their music as organic as possible. NC hosts several aspiring artists and producers, such as rapper Elijah Burke and multi genre producer Kilian Pfieler. All 3 of these artists remain independent, but could greatly benefit from exposure that record labels bring.

When an artist lists themselves as independent, they see a high majority of profits from their music (minus fees to distributors and collaborators). This means no label or third party retailer receives any percentage of their earnings. This idea sounds rewarding, but an immense number of artists require labels to help build their career and connect them to other artists. Both of these routes create a unique way of building a music career. The route an artist chooses depends on how they rose to fame, their fanbase, and what level of success they desire. In this system though , lies one flaw.

“Whether to go indie or major has been a hot topic among artists for years. Recently, Chance The Rapper is a shining example of an artist who has had major success despite refusing to sign a major label deal,” XXL said.

Artists that the industry considers “mainstream” and “big” constitute the backbone of the music industry. As long as they maintain their place and posture, the industry thrives. But, as soon as these artists one by one start turning independent, the music industry begins to suffer. For example, the 47 time Grammy nominated and 4 time Grammy winner Aubrey Graham, better known as Drake, fits as a vital piece to the puzzle. If Drake decided to become an independent artist, his global influence would convince other mainstream artists to do the same. If Drake, who amassed over 60 million monthly listeners on Spotify, or any other caliber artist conducted this it could then trickle down the hierarchy, causing record labels to see a humongous cut in revenue. “Smaller” artists could then not purchase features and collaborations from other artists, damaging the way artists “make it” in today’s world. Drake, along with other influential artists such as Justin Bieber or the Weeknd, help hold the entire music industry together, allowing for lesser known artists to work their way into the music scene.

“My view on the importance of record labels is that it’s a way for smaller artists to get their art broadcasted to a larger audience in hopes of gaining a larger following and boosting their career. Record labels are very important for some artists, but some artists view them as their enemy,” aspiring producer and KSU student Tracy Winckler said.

If lesser known artists plan on carving their path to achieving success in the music business, they must follow one of two paths. They can transition to an independent status and use social media as their main marketing tactic, or sign with a record label to help boost their career. One option could potentially end if mainstream artists decide to shift alignments for money or control reasoning. As more and more songs become uploaded to major streaming services, and listeners stream music through the roof, mainstream artists must stay signed with record labels to allow lesser known artists to pursue their dreams. Though these artists could potentially switch their management for more selfish reasons, they must think about others who aspire to reach the current position they hold.

“Artists, big or small, are vital to every aspect of the music industry. I think smaller artists complement mainstream artists, while also benefiting from gaining fame and following. There’s a healthy bond between these two currently, and a lot is riding on mainstream artists to remain in this position. I hope they see and understand their influence,” Alarcon said.