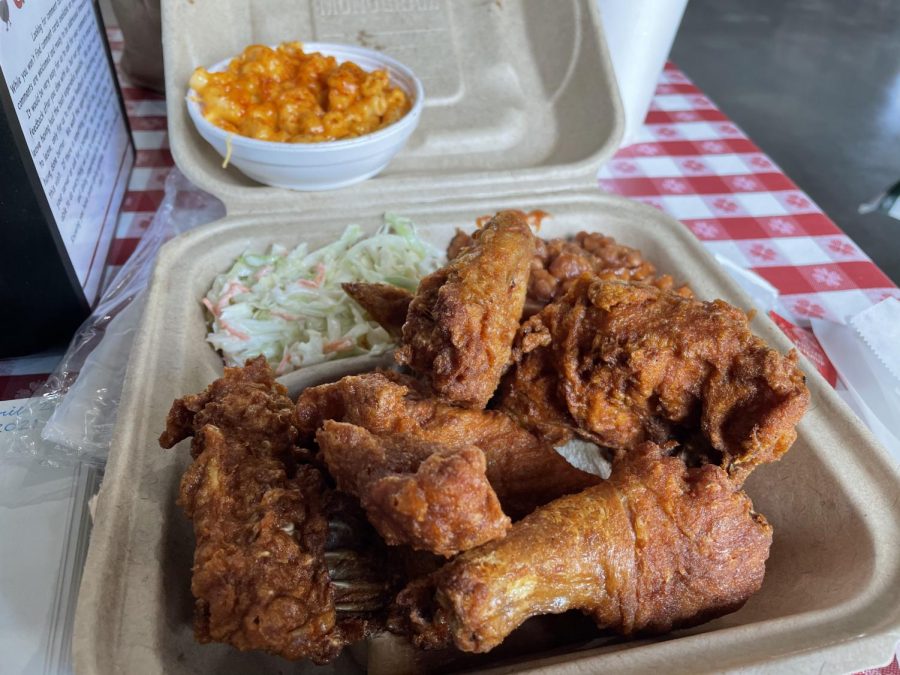 Gus’s offers plentiful side options to go along with their “World Famous fried” chicken. The chicken offers a crispy skin and delicious inside with a heat that grows the more you eat. The spot, a hit with college students in other cities, has already received attention from KSU and NC students.

As the city of Kennesaw grows into a college town with the expansion of Kennesaw State University in recent years, staples of typical college towns entered the business scene. Insomnia Cookies, a late night cookie shop famously located in college towns, such as Athens, Georgia, opened in December of 2020. Gus’s Fried Chicken located in downtown Kennesaw opened early April after the wild popularity of their location in downtown Atlanta, which opened in August of 2016.

Gus’s Fried Chicken began producing high quality fried chicken and other treats for the Mason, Tennessee community in 1973 when they opened “Maggie’s Short Orders,” named after the owners Na and Maggie Vanderbilt. When the first restaurant opened, the menu consisted of only fried chicken between two slices of white bread. Since popping up in college towns around the United States, the menu has expanded and now carries eight sides and five different cuts of chicken, including breast, thigh, leg, wing, and tender, as well as white and dark chicken options. Gus’s also offers slices of pie or whole pies in five flavors, such as chess, chocolate chess, coconut, pecan and sweet potato. Although a limited menu, the options provide endless combinations for different pieces of chicken paired with sides and a pie to top the meal off.

The chicken, their most popular item, flaunts a crispy skin and a tender, delicious center. The notorious heat of the chicken builds as you eat and provides a manageable flavor that even the most spice sensitive can enjoy. Only fried in peanut oil, the chicken does not come in multiple flavors but the original spicy delights all of their customers. Typically paired with their classic coleslaw and baked beans, the sweet, sugary sides compliment the chicken wonderfully, creating no need for the available substitutions. The cole slaw provides a crunchy, sweet flavor, while the classic barbecue beans showcase a brown sugar flavor. The variety of sides and starters continues to impress the consumer and leaves them coming back for more, however they do little to overshadow the true star of the restaurant, the chicken.

“The support from the community has been amazing. Absolutely fantastic. The signs have been up since November outside, so everybody’s been anticipating us opening and everything got pushed back, like the inspections from the city and it just took a while to get everything put together. Understandably. But now we’re open and it’s almost got a cult following if anybody’s tried it up in Memphis or downtown, they couldn’t wait to have it here. So come join us, support us, support local, as I always say. We’re happy to be here,” Owner Mike Earnest said.

As Kennesaw ramps up its shopping and dining scene with the expansion of the downtown area, more businesses plan to move into the same area underneath the Revival on Main apartment complex. Gus’s, the third to open up in the complex after Honeysuckle Bakery and Bernie’s, hopes to make a lasting impression on the city of Kennesaw.