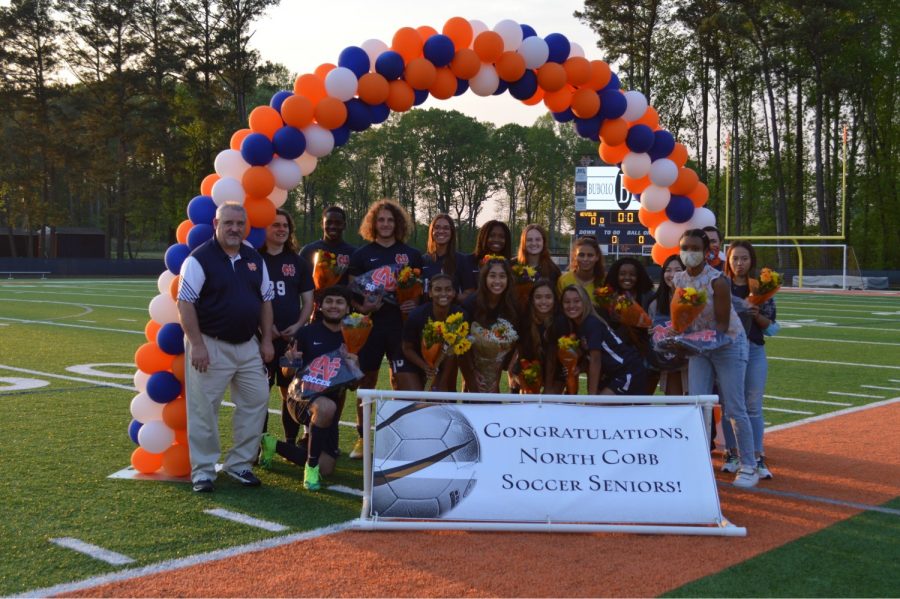 NC hosted Senior Night for the Lady Warriors and the Warrior men’s Varsity soccer teams Thursday, April 15. The Warriors fell to Marietta, but the Lady Warriors triumphed over East Paulding. Regardless of the results, the night held countless moments that will turn into unforgettable memories.

The NC Warrior and Lady Warrior varsity soccer teams held their annual Senior Night on Friday, April 17. The boys team played against the Marietta Blue Devils at 5:30 p.m., while the girls team took on the East Paulding Raiders at 7:30 p.m. In between games the seniors, celebrated with posters, flowers, and balloons, walked down Emery Sewell stadium’s field for the last time. Filled with a plethora of emotions and bittersweet endings, Senior Night will remain in players hearts forever.

“Senior Night was a night where I got to enjoy the game of soccer one last time with the people who made me who I am today,” NC senior midfielder Jocelyn Pacol said.

Unfortunately, the boys team fell to Marietta 6-1 after a lengthy 80-minute battle. The boys scored off of a set piece and kept the game in their attacking third for a period of time, though they struggled to maintain it. Through it all, the Warriors refused to give up and showcased the true spirit of a Warrior. Regardless of the result, the boys left it all on the field and put up an impressive fight.

“The past season has been rough for all of us, but we kept going as a team. I hope all the younger guys learned how to work together for the rest of their high school career. It means a lot to see the younger guys look up to me and my fellow seniors, but Senior Night also helped me grow to bigger things,” NC senior midfielder Elvir Prozorac said.

Spirits lifted as the senior ceremony commenced, and all in attendance joined in to recognize and celebrate the last four years. Seniors shared feelings of gratitude, words of wisdom, and future plans. The seniors joined together for countless photos with coaches, staff, and teammates before it came time for the girls’ game against East Paulding.

From the beginning, the NC Lady Warriors dominated the game and held possession of the ball consistently throughout. Most of the game took place in their opponents half of the field, and players took several shots on goal. After numerous attempts, the ball finally found the back of the net with Magnet senior Helena Chea scoring two goals for the Lady Warriors and Magnet junior Kenna Armitage adding one as well, producing a final score of 3-0.

Although the season did not go as planned for either team, Friday night’s game ended on a high note. Eight seniors will leave the Lady Warriors, and four seniors will leave the Warrior men’s soccer team. The seniors have cherished their time on the NC field, and next year will look extremely different without them. NC will miss all of the seniors and feels much excitement to see them begin the next chapter of their lives.

“The class of 2021 impacted me on and off the field. I felt like I connected with each and every one of them, and I could come to any of them if I needed anything. They are always super supportive and are like big sisters to me. I will definitely miss their humor and their ability to make anything fun. They are always happy and encouraging everyone to be positive. I will miss all of them next year,” Armitage said.