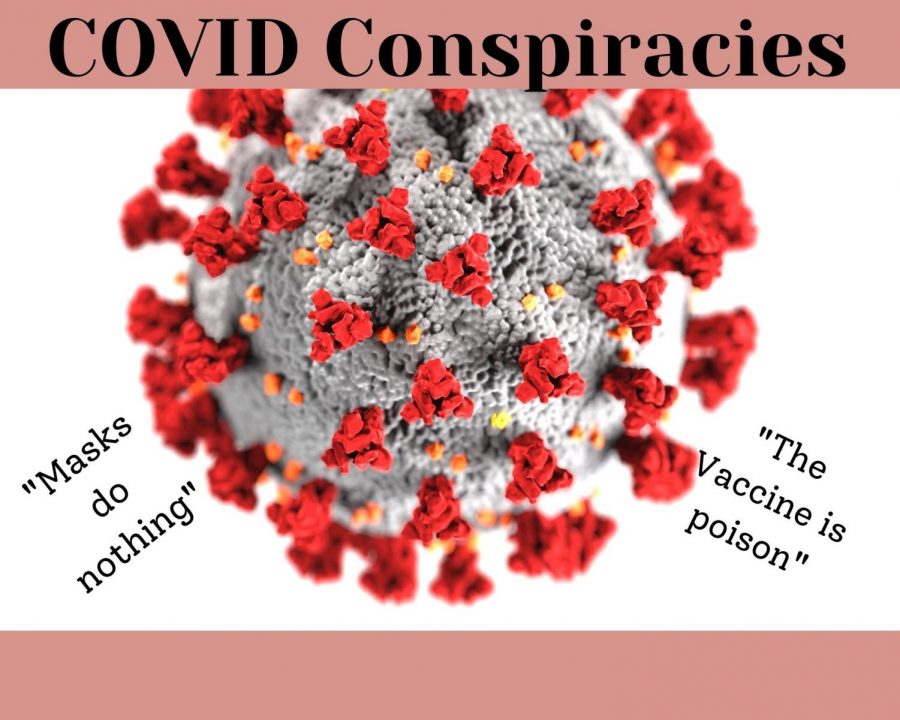 As the world continues to cope with surging cases and work towards a general herd immunity, covid conspiracy theorists continue to oppose those in power claiming the vaccine and CDC guidelines fail to prevent the spread. Some go as far as claiming the virus does not exist, calling it a political scheme founded upon control. Overall, these claims remain prominent providing an alternative to common knowledge, giving the world an invalid yet interesting point of view.

From disregarding social distancing and mask-wearing in public, to claiming the vaccine contains poison, COVID-19 conspiracy theorists continue to wreak havoc. As vaccine distribution makes headway and covid cases slowly decrease, the government experiences anguish with hundreds of thousands throughout the country refusing to follow CDC guidelines. The only way to improve current circumstances relies on a better understanding of the reasoning behind these theories and why they remain prominent.

The first conspiracies arose within the first few months of the pandemic, with citizens claiming that mask-wearing violating their rights. CDC guidelines at the time began advising all Americans to wear masks when in an indoor public place as well as remain socially distanced (six feet apart) to prevent further spread. After former President Trump’s spreading of misinformation regarding mask-wearing, Trump supporters and independent voters began to make claims stating wearing a mask did not help prevent covid but instead made one sicker, as well as calling covid an imaginary virus.

PBS claims that because of misinformation, COVID-19 conspiracy theories continue to persist by providing a false sense of political and social empowerment. By offering hidden or secretive explanations, they give the media consumer a feeling of control in a situation that otherwise seems random or frightening.

“It seems as though the majority of these said theories can wreak the society we have and it’s currently dividing us more and more. It’s very unnecessary. But we have to be aware of other people’s differences and beliefs. We need to be willing to understand each other and listen to each other without arguing or fighting,” junior Tiffani Elliott said.

According to ScienceSurvey, former President Donald Trump, at the start of the Coronavirus pandemic, did not take the threat seriously, tweeting about the pandemic and calling the virus another form of the flu. His conflicts with Dr. Fauci over the death tolls and the new vaccine did little to ease worries. He only began wearing a mask in public on July 11th, 2020, despite having declared COVID-19 a national emergency in March 2020.

Another covid conspiracy regarding covid as a government-created political tactic continues to gain prominence with 25 percent of Americans claiming the pandemic does not truly exist. Conspiracy theorist Daniel Roberts, for example never received vaccination from the age of six till now. His parents raised him to believe inoculations indicated danger, and when the coronavirus arrived, he called it a hoax.

Lastly, conspiracy theorists continue to label the covid vaccine an unsafe method of controlling the virus. A survey done by Healthline theorists claimed that vaccine-hesitant activists continue to manufacture stories of deaths related to the vaccine that never happened. In December, for example, multiple social media posts falsely claimed a nurse in Alabama died after receiving their shot. Health officials responded by calling every hospital in the state that had administered COVID-19 vaccines and confirmed in a statement that no persons who received a vaccine in Alabama had died.

In conclusion, COVID-19 conspiracy theorists continually confuse and cause anguish amongst the United States fueling the fire already created by political anguish and covid related deaths. As the United States slowly creates a herd immunity, those in opposition will remain in opposition risking both their mental and physical health in these desperate times.