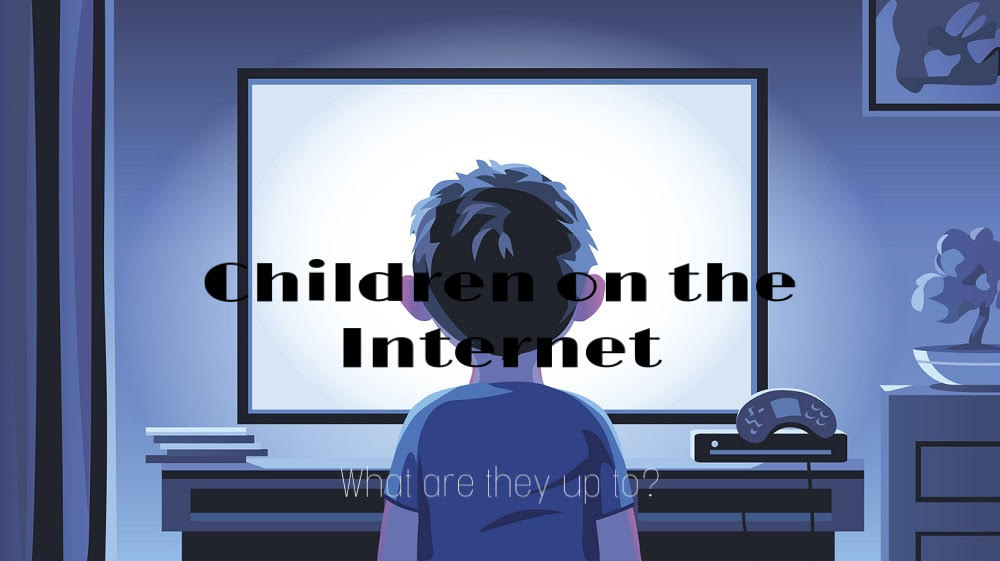 With technology evolving every day, and more kids exposed to the media, should parents worry about what their kids do and watch online. Parents who take safety to a different level and spy on their kids online teach kids how to sneak around and hide stuff online. Technology has its’ pros and its’ cons and parents should consider both. (Racheal Oni)

With technology evolving every day, and more kids exposed to the media, should parents worry about what their kids do and watch online. Parents who take safety to a different level and spy on their kids online teach kids how to sneak around and hide stuff online. Technology has its’ pros and its’ cons and parents should consider both.

Kids on the internet: What are they up to?

In these modern times, kids gain access to technology everywhere. Parents hand their children iPhones, and other devices at a young age to keep them distracted and entertained. As kids get older and more able to navigate the media, do parents know what children do on the devices handed to them, and should parents necessarily take safety precautions?

“I gave my nine year old son a phone because when he gets back from school I have to contact him and know where he is and how he is doing because I’m at work and not there to make sure,” concerned mother Kenny Hadley said.

Technology has developed over the past years, including smartphones, laptops, tablets, along with numerous applications to download, which radically transformed what childhood looks and feels like. Parents find it hard to adjust with about 45 percent of American kids get a smartphone plan between the age of 10 and 12.

Teens and tweens tend to feel safer and less secure due to their constant use of technology, and parents who give their children under the age of 13 a smartphone do so for security reasons; The devices allow parents to contact their children or monitor their whereabouts, some say it makes parenting easier and some argue the opposite.

Due to exposure to tablets and smartphones at a young age, kids become more knowledgeable on how to use them and more willing to share that knowledge with their peers. While parents remain confused and ignorant about what their children can do with this advanced technology.

As children become more engaged in media, adults question whether or not this high level of exposure to electronic media could impact children positively or negatively. On the plus side, technology prepares them for the real world, but on the other hand, parents argue that children who use technology become socially stunted, and ungrateful.

“Honestly I find it easier talking to people online than in person and technology is not making it any easier,”  junior Abby Frasure said.

All around them, children will find and play with television sets, computers, tablets, and phones in many homes. Starting at a young age, some children even own devices and phones. According to the American Academy of Pediatrics, the average 8 to 10 year old spends about 8 hours a day within the range of media, while older children and teens spend about 11 hours per day. This time accumulates, and young people now spend more time with technology than they do in school.

Technology also affects attention spans. According to teachers, parents, and students, children find it more difficult to wait because of the immediacy of electronic experiences, they do not wait for anything for a long time. Thanks to technological advancements and their rapid pace, quick responses, and self-indulgence. These children remain immediately entertained, creating shorter attention spans.

A significant amount of young people require mental health interventions such as medication and therapy because of time spent on social media or using technology. According to an article by The Conversation, in 2012-2013 adolescents in the United States and the United Kingdom experienced a sharp increase in the rates of depression, anxiety, and self-harm, particularly among girls. The article also showed that girls use social media at a far higher rate than boys, bringing the correlation to light.

Spending too much time with technology also leads to social interaction issues, causing younger children to struggle with face-to-face social experiences.  A significant amount of people seem to prefer texting or social media communication over face-to-face communication, and when kids spend time together, they may spend more time texting on their phones than actually talking to one another. Whether children realize it or not, communicating with and navigating through social media sites exposes them to an array of skills, such as online communication, high-speed typing, and searching.

Although technology carries negative impacts it also benefits the world in ways, for example,  it can help improve visual-spatial development, and aid kids in learning about how to make choices, and solve simple problems. The games and applications on tablets and smartphones can also help children gain the experience they might need to succeed in the future.

To avoid too much exposure to the media through technology, parents want to take understandable safety measures, and technology only makes it easier for parents to spy on their children, with applications like Bark, which monitors what kids do on their devices. While parents believe these measures work best for their children, these kids must learn how to handle their own online identity independently, including what to say, share, download, and upload, as well as what not to say, share, and upload. Parents should teach their children proper online behavior, just as they should teach them proper offline behavior.

“As a mother, I should be able to monitor what my kids are doing online. Technology is advancing and there are more social media platforms than there was when I was younger, I do not want my children exposed to something they are not ready or supposed to see,” mother of three Olamide Lawson said.

Surveilling children does not make them more secure, in reality, it negatively affects the relationship between a parent and their child, including the development of mutual mistrust between parents and children. It might backfire, motivating them to try even harder to conceal risky activity. Some parents even result in taking their kids’ phones as punishment. When parents take away their children’s phones as a form of retribution, they appear to withdraw from their parents, they do not attempt to solve their dilemma or speak to the parent, which sets the parents up for a manipulative teen who would turn to deception to obtain the phone taken from them.

In summary, the world witnessed the advancement and evolution of technology over the past years, and kids get more exposure to the media every day, but technology also presents children with critical problems which aids in learning about how to make decisions and solve those problems. Games and applications for tablets and smartphones will also provide children with the necessary practice to achieve future success, and students who use technology effectively will reap significant benefits.

“Without technology the whole virtual school option would not exist, while technology has its perks, there are also many good things it has brought to me and to the world as a whole, so when naming the cons of technology we should also consider the pros,” senior Yosola Odunuga said.