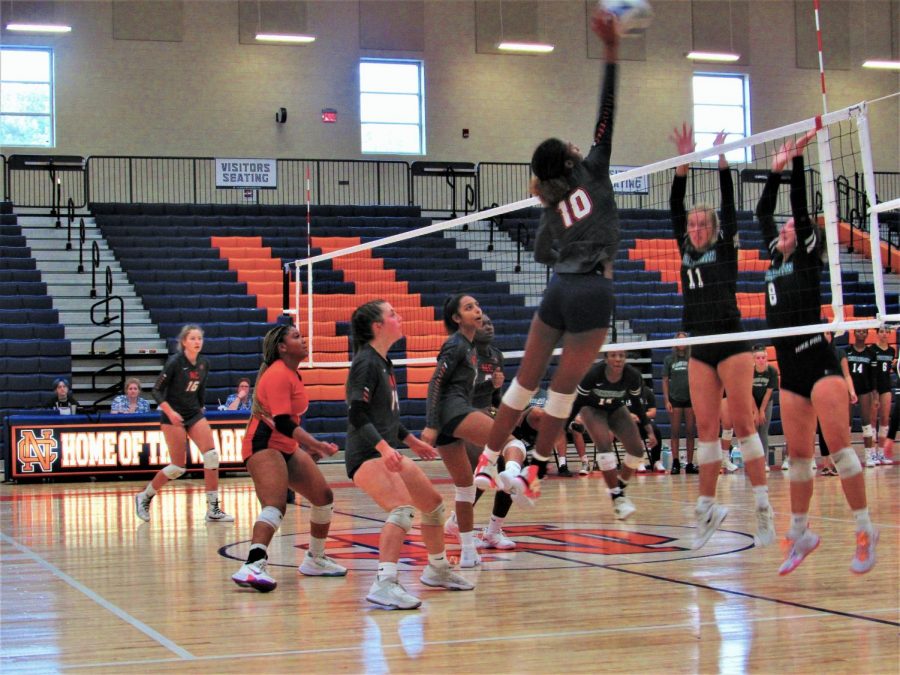 The NC Lady Warriors opened their 2021-2022 season against the Kennesaw Mountain Mustangs. NC junior, Jaidyn Garcia utilized hard-earned skills from tournaments in Las Vegas and Orlando, along with the support of her teammates as she led her teammates and they tenaciously held a close game against Kennesaw Mountain. “Jaidyn is one of the best right sides in the state,” NC senior 12th grade outside hitter Carson Walker said.

The NC Varsity Lady Warrior volleyball team returned for the 2021-2022 season with a hopeful and eager attitude. During preseason affairs the team practiced extensively to perfect their skills before regular season play. Unlike the 2020-2021 season, summer conditioning not only took place two times a week but also occurred before and after daily practice.

Outside of summer workouts, numerous Lady Warriors participated in club volleyball, allowing them to stay active and increase their capabilities. Various girls played with clubs such as Cobb Atlanta, A5 Volleyball, and 575 volleyball. In addition to practicing with her fellow Lady Warriors, NC magnet junior outside hitter Carson Walker plays beach volleyball. As an S3 volleyball (Southern Select Sand Volleyball) athlete, Walker plays outside in the sand, with only two players on the court instead of six.

“It’s so much fun, I like it more than indoors. It’s a lot different but it’s how I train,” Walker said.

Despite their tedious preparation this season, they conceded a minor loss at their first scrimmage of the season on August 10th. They showed plenty of enthusiasm at their match against the Mustangs, but the girls misstepped and that cost them the game.

The team started off strong, with powerful serves and vigorous spikes, and appeared to control the majority of the first set. At one moment in the game, they held a 4 point lead, yet the Warriors lost the first set 25-18, due to their clustered placement and imprecise blocks.

Throughout the second and third sets, the Mustangs showed no signs of backing down. NC junior Jaidyn Garcia, the team’s best hitter, remained flawless in most of her spikes. Alongside Garcia, junior Elena Brown proved her skills as a solid defender and worked with the rest of her team to earn plenty of points against the cross-town rivals. However, the opponents appeared dominant in their own right, and as the Warriors slowed their pace, they ultimately lost 3-0 in the third set.

The Warriors demonstrated an outstanding first-game performance. The outcome did not end how they wanted, but the Lady Warriors still maintain high hopes for this season.

“The loss kind of hurts, because it was the first home game, but I think it’s only the beginning of the season so it can only go up from here,” 12th grade defensive specialist Camden Weigle said.