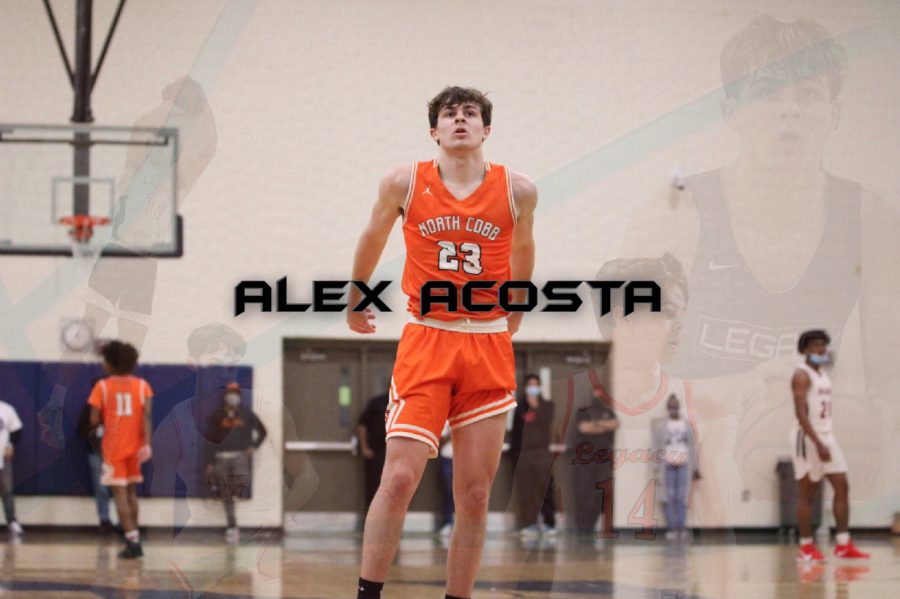 NC magnet senior Alex Acosta collected several Division 2, Division 3, and NAIA collegiate offers over the course of the summer. Acosta attracted attention from college coaches from all over the country due to his tenacity as a finisher and rebounder. Acosta began his high school career on the freshman team but quickly moved up to the varsity squad. In his sophomore year, Acosta provided quality minutes on the 2019-2020 team that reached the region championship. Acosta looks forward to a bright senior season filled with impressive team wins and memorable moments with his teammates.

Entering the halls of NC as a freshman, the majority of student-athletes hope to add their name to the winning culture that the Warrior nation developed over generations. For most, this task seems like an improbable accomplishment, but one Warrior continues to impress year in and year out. NC magnet senior Alex Acosta currently leads the 2021-2022 Warrior basketball team and provided quality minutes on the varsity squad that reached the 2019 3-7A region championship.

Starting out on NC’s swing team his freshman year, the six-foot six-inch small forward worked his way through the prestigious basketball program and eventually earned a significant role as an upperclassman. Acosta’s recent efforts earned him a collection of collegiate offers from around the country and set him up for a momentous senior season. Despite the COVID-19 pandemic that started during Acosta’s sophomore year, the recruiting process returned to its normal activities along with the 2020-2021 school year.

“I’m super excited to be back in school for my senior year. I feel like spending half of sophomore and all of junior year online really took away some of the best parts of high school. Being back in person has allowed me to interact more with the student body and actually retain information taught in my classes, most of which I didn’t when learning online,” Acosta said.Playing on the Georgia Legacy 17U AAU team over the summer, Acosta received high praise for his tenacity as a rebounder and finisher in the paint. Acosta’s game revolves around cleaning up on the boards and hitting open mid-range and three-point shots in transition. Multiple recruiting outlets noticed Acosta’s play throughout the summer season and labeled him as an underrated player to watch in the class of 2022. With such a distinct “nose for the ball”, Acosta holds special talents that separate him from those around him. With this, Acosta also boasts a 4.63 GPA, which attracted several high-level academic programs to Acosta’s recruiting.

The Chant received an opportunity to sit down with Acosta and discuss basketball, future endeavors, and more about his personality off the court.

Alex, you had a productive summer. Describe some of the tournaments, teams and events you participated in over the summer season?

Multiple outlets including Keith Agran from On The Radar Hoops, describe you as a physical player that’s not afraid to bump and grind for rebounds or extra point opportunities. How have you gained & improved on that quality since your freshman year?

“For starters, I greatly appreciate all the work and effort that media outlets, such as Keith Argan, do to get not only me but my team’s name out there. When it comes to my physicality of the game, this part of my overall game has taken a tremendous leap since freshman year. Although at the time I was already considered a pretty physical player who knew how to rebound the ball, getting into the weight room and eating right allowed me to get even stronger and really evaluate my physical play.”

I saw you’ve received multiple offers from colleges like Washington & Jefferson, Life University, Maryville College, & Voorhees College. What were those conversations like with the coaches there, and what was the feeling like after finally receiving each offer?

“The number of kids who go on to play any level of collegiate basketball is super small so to receive an offer from any team is beyond anything I could ever ask for. The recruiting process for each of the different schools that did offer me differed from one another. For example, my first offer from Voorhess came unexpectedly after an exposure camp that I was performing in but the offer from Washington & Jefferson came after a number of weeks of talking on the phone and even in-person visits. Even after receiving my first offer and processing the realization that I have the chance to play basketball in college, that same feeling never left for each offer that I received. I was just beyond blessed and honored that certain programs had faith and trusted me with the opportunity of bettering their program.”

What offers and opportunities does Alex Acosta have on the radar, and what would your dream offer be, realistically?

“At the moment, I’m talking to a number of high academic D2/D3 programs, some of which include the likes of the University of Chicago and Missouri S&T. Missouri S&T is planning an official visit for me right now with the hopes that I can get up to the campus and truly experience the life of a college athlete at the university. My absolute dream offer would be from either Emory or Georgia Tech. With the recruiting process still underway with a number of schools and schools still reaching out showing interest, I do not yet know when I will announce my commitment.”

Some people heard about this, but for those that don’t know, you actually lost a few front teeth in an AAU game. How exactly did that happen and have you had any difficulties with adjusting to that?

“I lost three of my front teeth during the first game of the Elite 32 Tournament in early July. I was going up for a rebound when a member of the opposing team went up and brought his elbows down super fast, hitting me dead in my mouth. The instant pain and blood coming from my mouth told me that something bad had happened but I continued to play for another one to two minutes until I finally came out. The days and weeks after my injury consisted of lots of apple sauce and Ibuprofen.

At first, I thought it was kinda cool that I was missing teeth but after a while, the realization of having fake teeth and having a different smile finally hit me. It took a little getting used to but soon the new teeth and routines became a habit and a part of my everyday life. Now, everyone has gotten used to the fact that my teeth aren’t real and that I can literally take them out whenever they want, but it turns out they really don’t care that much.”

When it comes to this upcoming high school season, what are some personal goals you’ve set for yourself?

“I want to be region player of the year. Personally, I believe that I’m the best overall player in the region and with my strong work ethic, I believe that I can achieve that goal. I also want to improve my points per game (PPG) average by a minimum of five points while also improving my number of three-point shots per game and my three-point percentage. Seeing a rise in all my stats would be the ultimate goal. I also want to achieve the role of being a good leader and role model to my teammates, leading them into every battle that we face.”

We’ve talked about your own goals, but give us an outlook on the 2021-2022 NC basketball team. How does it look/who do you have, and have you as a leader tried to impact others?

“I believe that this year’s NCHS varsity basketball team has a chance to shock a lot of people. Although we consist primarily of a lot of younger and inexperienced guys, these younger guys are not ones to back down from a challenge. They will step up to the fight, no matter the size of the opponent. And with the help of the few older guys that are on the team, including myself and the other team captain Evan Daniel, we can pave the way for the younger guys to follow. The role of team captain places a lot of responsibility upon someone but I try to use the role as a way to motivate and uplift the guys, even during times where they might not want to be bothered. I also use my leadership role to make sure everyone is on the same page and working hard at every drill/workout so that not only do they get the best results individually but we get the best results as a team.”

As Acosta continues his journey towards college basketball, he builds on the Warrior name and legacy that he will one day leave behind. With vast skills on and off the basketball court, Acosta brings positive interactions to everyone he meets. Make sure to follow Acosta and the 2020-2021 NC basketball team as they start their season in late November.

“Basketball over the years has taught me a plethora of important lessons that apply to everyday life. Lessons like the importance of teamwork, a good work ethic, and how to properly manage my time will all benefit me. I am so thankful for NC and the coaches I have come in contact with. When I graduate, I hope to leave the legacy of the person that could always put a smile on anyone’s face, no matter if I knew them or not. It would be cool if my name was remembered for at least a year or two after I left but I know that’s a lot to ask for,” Acosta said.