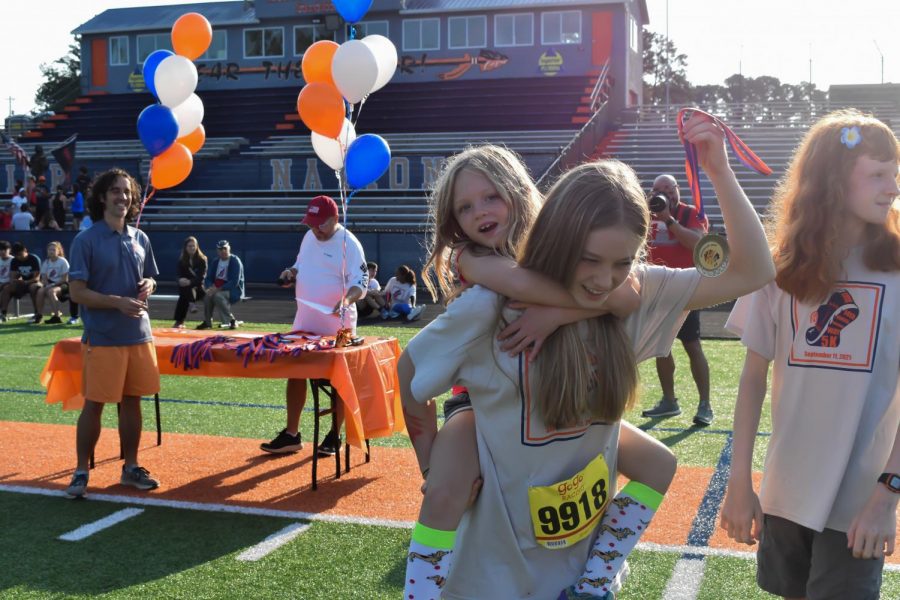 After the run in the morning, runners earned recognition no matter their age. Race organizers handed out medals to the fastest runners from male and female brackets across twelve different age groups. “The Warrior Way is always a great community event. This year it was even more special after having to be virtual last year. So many North Cobb alumni showed up to run. It was great to see so many old friends,” cross country head coach John Huff.

The weather cools down and the trees turn brown. The seasons shift into fall and a new Warrior Way 5k begins. The event, hosted annually by NC’s cross country program, brings together racers from NC’s community along with age groups and a variety of sponsors to support the school’s long-distance talents.

“It was a really cool race, a lot of people came out. I got a friend of my dad to invite some people to come out. He also has a business that is one of the sponsors out here today. It’s called Back to Life Pain Center,” NC runner Sebastian Barr said.

Held at NC, the 5k course starts in front of the Arena on the street, wrapping around the front of the school on Old 41 Highway NW and into the NC bus port. The route continues as participants race onto Nowlin Road to traverse around Awtrey Middle School, eventually running onto the trail behind the two schools. Surrounded by fall foliage and led on by orange trail markers, racers twist and turn along the trail until ejecting back out towards Nowlin Road. The course ends on the track around Albert Matthews field after racers trudge along on the sidewalk in front of the school and past the Arena parking lot.

“It was great seeing everyone from last year again. Actually, it was another alumnus who was like ‘why don’t we do the 5k this year’ and I said ok and I signed up under Lacey [from the cross country team as my referral] and the other alumni signed up under someone else,” Fabien said.

Hundreds of community members extended support to NC’s cross country team. Families, participants, and volunteers enjoyed a brisk, cool morning along with numerous runner awards after the 5k and a 1k to bring in younger kids. Every Warrior Way 5k unites the community celebrating a common love of running and the people who run with them.