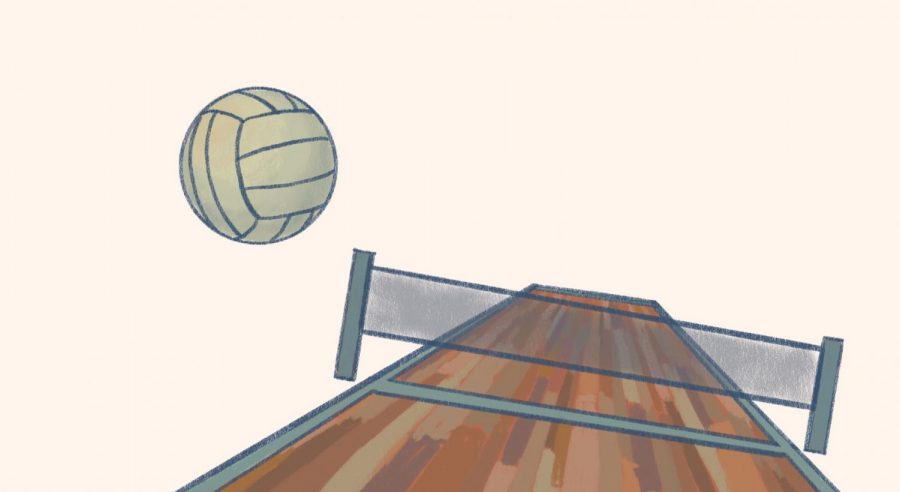 Before the game began, senior volleyball players enjoyed time with their teammates and loved ones, standing as an example for younger players. The night commemorating their hard work allowed the seniors to reflect on their experiences on the team. “It feels great to be a senior. It’s every freshman’s dream or goal to finally become a senior, but again it doesn’t feel real because of how things were last year,” senior varsity defensive specialist Camden Weigle said.

Escorted by their parents, family members, and favorite teachers as friends looked on from the bleachers, this year’s senior volleyball players kicked off Senior Night as they walked across the gym to receive recognition for their years of hard work. The annual tradition brought together the loved ones of senior players Camden Weigle, Ellie Boyle, and Khemille Brown as they celebrated the players’ last season of high school volleyball. After the ceremony, players from NC and North Cobb Christian School streamed onto the court, preparing to play a close game of three sets.

To the satisfaction of those wearing orange in the stands, NC’s team won 3-0 against North Cobb Christian School, earning their fifteenth win of the season. Beyond the excitement of Senior Night festivities, the team commemorated junior Laila Hixon after her highlight in-game. In the middle of the game’s third set, her teammates held up pink signs on the sideline to celebrate as she secured her one-thousandth assist. The moment demonstrated a small instance of how the girls on the team have learned to lift each other up and celebrate each other’s growth, a highlight of the sport for the seniors.

“We have new players, but there are still some of us that have been playing together for a long time now. The best moments of my volleyball career would probably be the friendships that I have made. Being with a team like this for so long, it’s hard not to make the friendships I have with this team over the years and it’s like nothing else,” senior varsity defensive specialist Camden Weigle said.

For parents in the stands, the game provided a chance to reflect on the growth their daughters gained through their journeys in volleyball. One such parent, Tom Boyle, has watched his daughter, Ellie Boyle, progress through volleyball for ten years, helping her through injuries, surgeries, and setbacks in the sport they share a love for. During the game, he held up a huge sign of his daughter’s face to show support, alongside other parents with their own signs cheering on their respective daughters.

“For Ellie, volleyball has been quite a journey. She’s been a real leader this year. It’s been really good to see her in a different role in a sport she’s been in for so long, asking her to do different things, so that’s been neat to see. You wish so many things for your kid, but that was kind of a bonus,” Tom Boyle said.

Similar to other seniors on the team, middle hitter Ellie Boyle does not know if she will play in college, but she improved her setting prowess coming into her last season. Last year, NC’s team won the Cobb County tournament, and this year, Boyle hopes to win at state.

“It’s wild, I feel like the past four years were a fever dream, it just went by so fast. My goals are to hopefully win state this year! We got close last year, but came up short, but I know we can do it this year,” Ellie Boyle said.

With the ongoing pandemic, players appreciate the opportunity to try to make state with a sense of normalcy after an unusual 2020-21 season. Through the formative years of high school, the senior players have worked to improve their skills and team relationships despite any setbacks and have set an encouraging precedent for the developing season.

“I’m very glad to finally be a senior. These past three years of course have been difficult, but I’m excited to see the product of my hard work and set and accomplish some more goals. My goals, of course, are to keep improving but I want to keep improving my mental toughness and focus during games because it will help in other ways too,” senior varsity defensive specialist Khemille Brown said.