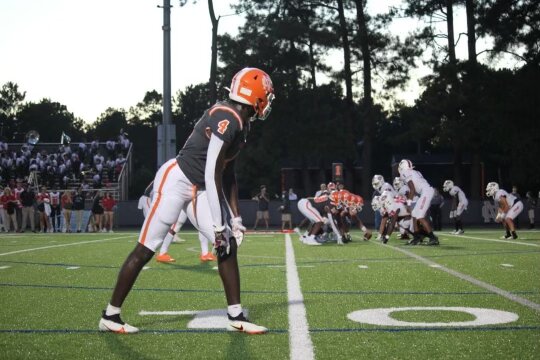 The Friday night football game included multiple events, including Rally’s fundraiser for childhood cancer night and NC’s annual Sports Hall of Fame night. An aura of precedence filled the sidelines and field alike. Like decades of alumni before, the Warriors played against an opponent that defeated them the previous season, North Gwinett’s Bulldogs. At no other point (excluding the final quarter) could spectators predict the outcome of the game as the match seesawed back and forth. Regardless, the final score resulted in a 40-19.

As the NC Warriors (4-1) peeked through the woods before Friday’s game against the North Gwinnett Bulldogs (3-3), the crowd filled with the potent determination like the alumni who came before. The Warriors hosted their annual Football Hall of Fame night on Friday, September 25. NC elected four alumni who embodied NC’s rich and historic expectations: Keith Arnold, Lewis Gass, Morgan Jackson and Dave Wiggins.

The stakes soared ahead of the Cobb-Gwinnett county matchup, after last year’s game, which saw the Bulldogs giving the Warriors their only regular season loss. The Warriors set the tone relatively early, scoring on the opening drive of the first quarter, with junior quarterback Malachi Singleton punching it in for a 6-yard run. After a miscued kickoff return by the Bulldogs, the Warriors recovered and extended the lead to a 13-0 score. Singleton carried in a 33-yard scramble and supplied momentous energy throughout Emory Sewell stadium.

“He’s [Singleton] such a dual threat; if they got the box, then we’ve got De’Nylon out there one-on-one. If they back off, he can run the football. He’s tough to deal with,” NC head football coach Shane Queen said.

North Gwinnett desperately attempted to keep up with the Warriors’ fast-paced play. The Bulldogs earned a safety after Singleton fell on a fumble in the end zone, and also scored on the following drive, bringing the score to 13-9. Before the halftime buzzer sounded, the Warriors added salt to North Gwinnett’s wounds, when Singleton hit junior wide receiver in the corner of the endzone for a 13-yard touchdown.

Following the Warriors’ successful first half, NC ran away with the remaining time, squashing the Bulldog’s hope. Singleton went 19-of-21 for 340 yards and three touchdowns, while the University of Georgia commit De’Nylon Morrissette collected seven catches for 190 yards and two touchdowns. NC’s valiant efforts earned them a 40-19 win before region play began against the Harrison Hoyas.