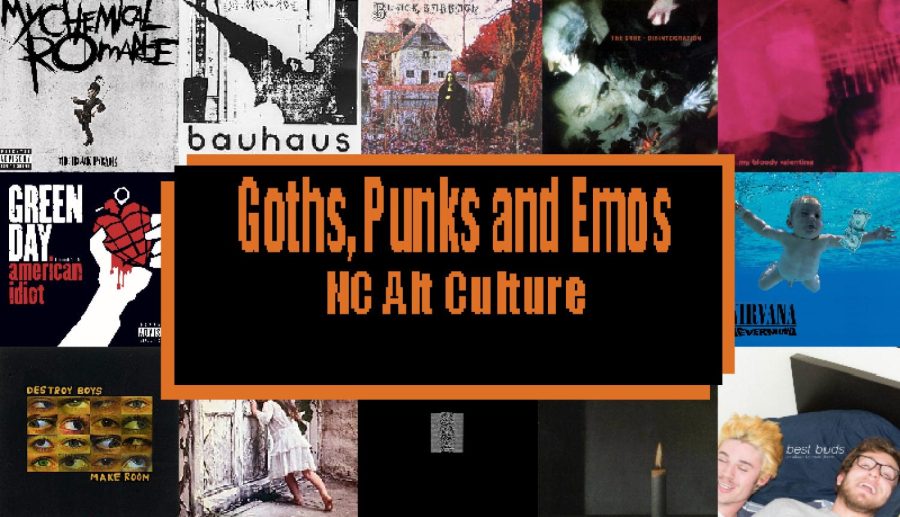 Anyone involved in them will tell you the distinctions between the numerous alternative subcultures. Of these, several groups have found a home at NC. Despite all the differences between goths, punks, etc, they all share common ground in listening to music that receives less than global attention. “[The music] is what really differentiates most alt subcultures from each other because the majority [of them] are music based. If you don’t listen to the music you’re a poser,” senior Chloe Mcspadden said.

North Cobb High School finds itself host to a large and diverse student body. Teens from all walks of life and a vast array of cultures spend their everyday lives surrounded by both like-minded and extremely different individuals. Despite the diversity, the student body typically forms a common ground in terms of the media, fashion, and ideologies they consume and participate in. When these shared interests and beliefs form, those who decide not to participate begin to stick out.

Alternative cultures pop up in schools and communities across the globe. Oftentimes the people who make up these groups enjoy going against the grain while highlighting their unique characteristics. Students find comfort in the freedom of participating in alternative cultures. They feel encouraged to explore and express themselves through fashion, art, and music.

“I feel like there’s no judgment as far as fashion and self-expression, and even mentally [in terms of] politics and mental health as well. If someone isn’t mentally well it’s normalized. It’s [alternative culture] a safe space as well,” junior Rei Denton said.

Whether they label themselves as goth, emo, scene, punk or simply alt, these students find common ground in the media they consume and their personal beliefs. Listening to music outside of the mainstream genre remains a tell-tale sign of alternative culture. Music has played an integral role in the scene’s development. Dating all the way back to the invention of metal by Black Sabbath in the ’70s and the hypnotic goth rock of Bauhaus in the ’80s, and now with modern bands like My Chemical Romance and local emo band, Michael Cera Palin, it continues to play a key role in the culture. Music typically takes the place as the starting ground for the rabbit hole into alt culture. Genres like metal, emo, shoegaze, grindcore, hyper pop, and punk form from alt kids for other alt kids, creating a cycle of emotional and evocative music for people to connect to.

“Music is probably one of the biggest influencers of alt culture, especially since it is often tied closely to fashion. Music is a great way for people to come together and appreciate a unique and genre-bending sound, so it’s definitely integral to people finding each other and exploring themselves in the culture,” senior Angelina Lemon said.

World views and political views also play a sizable role in alternative culture. With movements such as punk, starting with the intention to upset the masses and call out societal injustices, certain alternative subcultures possess firm and stable roots in political ideologies. Those participating in alt culture typically hold common values such as community, personal freedom to explore and express oneself, and caring for and encouraging others.

“I would say it’s when people have certain takes on life and value it in different ways. This also includes political alignment. I value freedom of any kind, equality and neutrality when it comes to the law or socially,” Denton said.

The diverse environment at NC enables alternative kids to express themselves and their beliefs, as well as find like-minded people to form meaningful friendships with. The countless subcultures represented at the school provide plenty of opportunities for any student to find themself.

“I do think NC has a larger alternative scene than most schools. I find almost everyone who identifies as an alternative, to be very welcoming and respectful people,” senior Leo Liechtenstein said.