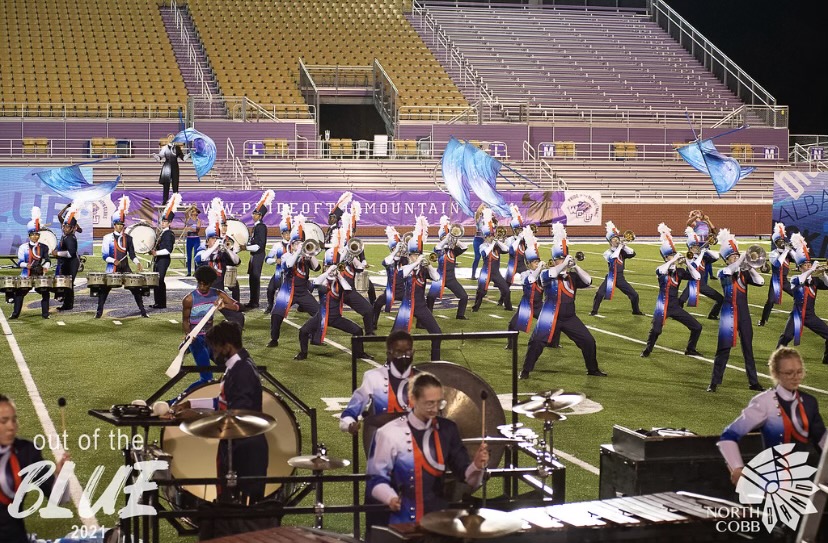 The marching and color guard performed excellently Saturday, October 23. Both the marching band and color guard worked their best to receive awards and victories. Color guard’s mesmerizing blue uniforms and stunning dances emphasized the band's music as they all stood out to the crowd proudly representing NC. With the victorious fifth-place final win, the marching band prepares for their next competition in North Georgia.

The NC marching band attended the Tournament of Champions, hosted at Western Carolina University (WCU) in the Whitmire Stadium on Saturday, October 23. Filled with determination, the marching band arrived at WCU at 10 a.m., ready for their scheduled 12:15 playing time. The marching band trained extensively since the end of last July which led to four awarding trophies: second place percussion, first place band division, second in color guard, and fifth in finals. All marching band members, freshman through seniors, attended the tournament with high expectations and gratitude.

“It was huge, a composition that big and being able to hold our own that really progresses from past years. It was a long day but the kids did absolutely spectacular and very terrific,” band teacher Sheldon Frazier said.

NC’s band attended this competition twice before; once in 2014 when they scored 11th place overall. And a second time in 2015 when unfortunately the marching band did not make it to the finals, marking the last time up until recently that they attended. This ultimately provided much-needed motivation to make this year’s band dominate the stands. With intimidating competition such as Kennesaw Mountain High School, Cherokee High School, and Cambridge High School NC’s marching band thrived with adrenalin when preparing for their time slot. Color guard also attended Saturday’s competition alongside the marching band receiving an award of second place.

“I had a lot of fun. I would never trade that moment when I heard my band director yelling because of how good we sounded. When I found out we made finals we all yelled and jumped up and down because of happiness and surprise,” senior first chair bass clarinet Kiana Hawley said.

NC’s band attends a variety of competitions every year such as the Cobb Exhibition. Which helped prepare the marching band for its most recent victory. The NCs marching band participates in football games training their skill while cheering out for the football team such as Friday, October 29 at the Marietta game. The marching band’s upcoming competition will occur in North Georgia on Saturday, October 30th at South Forsyth HighSchool. The marching band will travel all together on charter busses all excited and ready for their next enjoyable competition.

“After winning our division I was extremely happy and felt relieved that we would be continuing to the next round. My favorite part was after we performed our final show, we gathered in a big circle to celebrate a great performance with each other,” junior tenor saxophone Morgan Zitsch said.

The color guard’s beautiful dances and the marching band’s soothing tunes, created an enjoyable time for the audience while the marching band played to the best of their abilities. With every event, the marching band continues to get closer together as a family. The long awaiting ride caused laughter and joy in preparation for their play. The band rode home that night with victory on their awards as a team. Seniors a part of the marching band admiring their last years at NC continue to make sure they make admirable memories with the band. With this victorious win, the seniors of the marching band happily parade with joy.