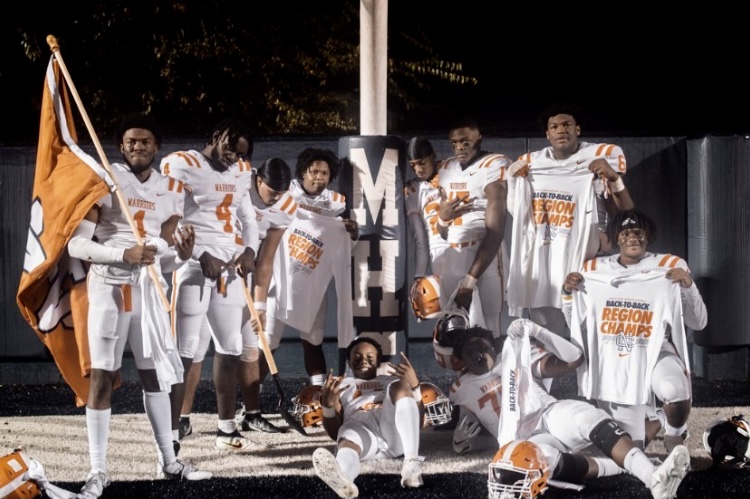 Ever since their week one loss to the then top-ranked 6A Buford Wolves, the Warriors appear stronger than ever. With eight consecutive wins and an average of 40.2 points per game, NC looks to increase this total against North Paulding next week. As more and more attention surrounds the NC football program, head coach Shane Queen hopes to maintain the focus of one common goal: a state title.

The number two state-ranked NC Warriors (8-1, 4-0) entered Friday night’s game against the Marietta Blue Devils (5-4, 2-2) with hopes of clinching the 3AAAAAAA region title for the second year in a row. Despite rainy conditions and chilly temperatures, junior quarterback Malachi Singleton led the Warrior offense by completing 18 of 20 pass attempts for 242 yards and three touchdowns along with 123 rushing yards on 22 carries and two scores. Head coach Shane Queen and the entire coaching staff squashed the Marietta Daily Journal predictions of a Marietta victory by limiting the Blue Devil offense to a single touchdown on the night. With a 35-9 triumph, the Warriors earned a top seed in the 7A state playoffs and will host the first two rounds at Emory Sewell stadium.

“I was proud of the way our guys persevered. We played through some tough things. It was raining. But we controlled the ball and we kept the ball for most of the night,” Queen said.

After both teams punted on their opening drive, Singleton earned the Warriors a 7-0 lead on a 23-yard touchdown run with 6:41 left to play in the first half. NC’s defense remained stellar all night and set up Singleton to hit senior wide receiver Sam Mbake on a 30-yard touchdown pass for a 14-0 lead. The Warriors entered the locker room with great momentum and demonstrated spectacular performances out of senior defensive ends Joshua Josephs and Latrell Bullard. Marietta quarterback Tyler Hughes entered the highly anticipated matchup as the leading passer in Cobb County but failed to find the endzone in the first half.

“If you can minimize (Marietta’s) plays in the second half, you’ve got a chance. If we can put pressure on their quarterback (Hughes) and get him out of the pocket, we’ll be in a great position,” Queen said.

The Warriors struck quickly in the third quarter when Singleton took a 27-yard run to the house on a fourth-and-one play, pushing the score to 21-0. Marietta would not go down without a fight, as they cracked the endzone for the first time with a 47-yard bomb from Hughes, making the score 21-7. The Blue Devils would then recover an onside kick on the ensuing kickoff, snatching momentum from the teeth of the Warriors. After an impressive defensive stunt on the Warrior’s own two-yard line, NC responded with a 98-yard touchdown drive, in which Singleton hit senior wide receiver, DeNylon Morrissette, with 5:32 left in the game. Morrissette collected an additional 11-yard touchdown catch, to extend the Warrior’s lead to 35-7. The Blue Devils would then earn two additional points from a safety.

Morrissette finished the game with eight receptions for 136 yards and touchdowns. For Marietta, Hughes tallied 205 yards and a touchdown but gave up a pair of interceptions to the Warrior defense.

The Warriors conclude their season against the North Paulding Wolfpack (4-5, 1-3) on Friday, November 5 at Wolfpack stadium. Though the regular season comes to a close, NC focuses on one goal entering the postseason: a state championship.