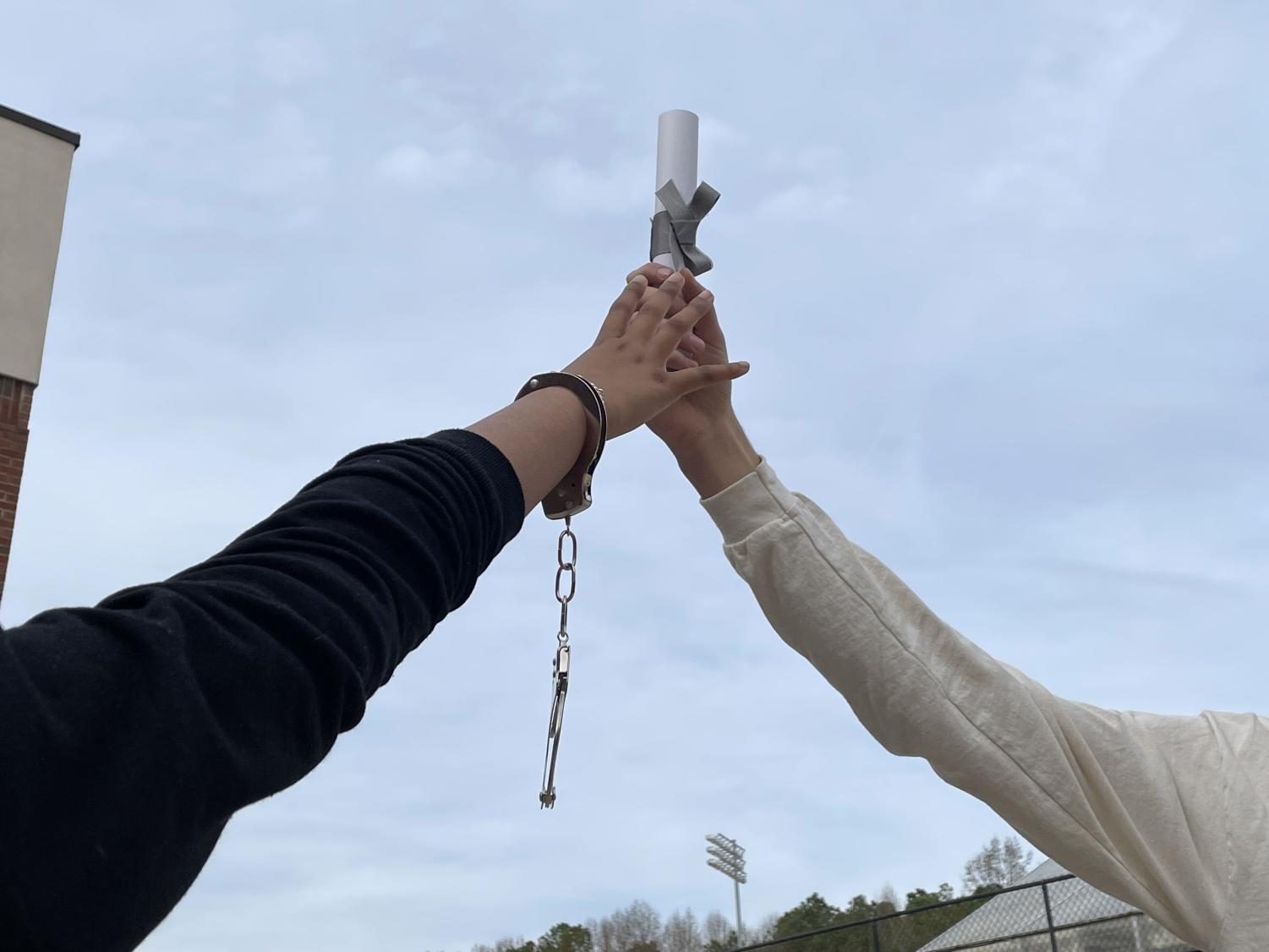 Teens reaching toward the future will meet different fates. The wrongful acts of teenagers may severely impact the rest of their lives or they may never face consequences for those acts. White privilege, the school-to-prison pipeline and other factors may determine the future for today’s youth. (Jemiah Clemons)

Teens reaching toward the future will meet different fates. The wrongful acts of teenagers may severely impact the rest of their lives or they may never face consequences for those acts. White privilege, the school-to-prison pipeline and other factors may determine the future for today’s youth.

America: the only country where racist teens can live free, while black teens stand in courtrooms taking pleas. American society normalizes a racist phase so much that young racists do not expect repercussions afterward. Society allows racist teens to pass off socially unacceptable behavior as a “mistake” and grants them a “get out of jail free card”. Meanwhile, people of color (POC) do not receive that same luxury. This societal double standard results from white privilege.

In recent months, teens and young adults took to social media to expose the racists in their schools and neighborhoods via Instagram and Twitter. As a result, the exposed racists lost academic scholarships, faced expulsion from school, and rejections from universities. Those who defend these racist teens and young adults tend to say, “It’s not fair” or “It was a mistake.” Cambridge Dictionary defines a mistake as an action, decision, or judgment that produces an unwanted or unintentional result. The keyword, unintentional, in this case, implies that racist teens do not want to hurt or harm POC, however, the exposed videos, text messages and Snapchat stories say otherwise. Once exposed, a makeshift apology on social media follows.

“These people only apologize when they get called out for their actions after the fact. The apologies are half-hearted and ingenuine. Racist white people don’t work to change their actions in the future. Seeing this makes me angry because I know they don’t care enough to fix the problem,” junior Abi Klinkert said.

In 2020, two white teens from Carrollton, Georgia received major backlash for a viral TikTok video. The then seniors at Carrollton High School represent two of several white teens who do the same things online. In the video, the teens filmed a “recipe for N-words” where they poured cups of water to represent different racial stereotypes against black people. The teens used racial stereotypes about absent fathers, watermelon, fried chicken and criminal acts as the main subjects in the video. In the cup labeled “making good choices”, the students never filled it with water. The video gained 8.6 million views in the span of weeks. As a result, Carrollton High School expelled the students and people on social media reported them to the universities the students planned to attend. Those universities then responded by revoking their admissions. White teens losing certain privileges statistically does not equate to POC teens losing certain rights.

One could argue, “They’re just a kid” or “It was a long time ago.” Ignorance does not equal an excuse for racism and bigotry. In a world where racial inequality dominates several public and private conversations, a teen claiming ignorance seems laughable. Considering that one can only learn racism from others completely diminishes the ignorance claim. No one wakes and decides that they will carry out racist rhetoric. They witness that behavior from people around them. Recently, for the first time, people began introducing racist teens to accountability.

Combatting racism starts with those most susceptible to its teachings, children. Best selling book White Fragility discusses white people and their complex relationship with racism. It brings up difficult conversations surrounding the topic and how to talk about it. Teaching children about different skin colors will help them understand and empathize with those who face racism. Teaching children to not see color will remove that empathy and social awareness. Talking to children about racism instead of teaching them racism can help to avoid a potential racist phase.

“Racist phases are just a sense of entitlement and a form of systemic racism. It’s so normalized within white communities that they are always offered more than one “slip up”. They face no repercussions because they were “too young” and “everyone makes mistakes,” NC alumna Rashida Jalloh said.

For people of color, once you get in line, you stay in line. One wrong move can affect someone’s entire future. According to the Equal Justice Initiative in 2015, black youth faced incarceration rates five times higher than their white counterparts for the same crimes. The national Black youth prison placement rate stands at 433 per 100,000, compared to 86 per 100,000 for white youth. So, using the “They were just a kid” logic, law enforcement should release all of these teens because they’re too young right? The same “mistakes” that white teens make would land Black teens in detention centers and set their lives off course.

The Exonerated Five, previously known as The Central Park Five, represent a monumental case that made a lasting impact on the Black community. Five Black and Afro-Latino teens from Harlem (Antron McCray, Kevin Richardson, Yusef Salaam, Raymond Santan and Korey Wise) faced coercion and provided false confessions and then wrongly convicted of raping Trisha Meili, a white woman who jogged through Central Park in New York City in 1989. The police used tactics such as physical force, aggressive questioning, shouting and threats. As a result of the coercion, the boys served between 6 and 13 years in prison. In 2002, Matias Reyes, a convicted murderer and rapist, admitted to attacking the jogger in Central Park. After evaluation, investigators found that none of the five boys’ DNA matched the semen found at the crime scene. This finding led to the name, The exonerated five.

“We were just baby boys, we were just trying to be entrepreneurs, having fun being kids. I had him out with me, riding him around, went to a barber shop, little haircut, a little touch up. If someone had told me, ‘You, little [explicit], yo. You stay here, you don’t go with him,’ I wouldn’t have went, [sic]” Exonerated Five member Korey Wise said.

When discussing the justice system and white privilege, the Kyle Rittenhouse case comes to mind. At the age of 17, Rittenhouse gunned down three protesters. Killing two and injuring one, Rittenhouse’s claim of innocence confused people across the country. Prior to his attack, a street camera caught the minor with a loaded assault rifle. Even with overwhelming evidence against Rittenhouse, the judge dismissed the gun charge and the jury found him not guilty. After his acquittal, Rittenhouse gained support from white supremacists. Aaron Chapman, leader of the neo-nazis, along with members of a Proud Boys online chatroom showed support via social media and public interviews. In comparison to the exonerated five, Rittenhouse received no legal consequence when he could have served years in prison. However, the exonerated five spent 5-13 years incarcerated for a crime the group did not commit.

As teens go into the world and become adults, they will go down their life paths. Several will go on to become doctors, lawyers, engineers, etc. while others may succumb to drugs, the prison system, or a life filled with struggles. More times than not, racist teens who receive no repercussions will become racist adults. With the rise of accountability via social media, society may no longer turn a blind eye to adolescent racism. Racist teens may now face a consequence for their actions. While that continues, Juvenile advocate organizations fight for shorter sentences and consequences for black and brown youth. The racist teens may become racist adults and perpetuate structured and systematic racist tactics such as voter suppression, redlining, etc. For several people, racist practices span far beyond adolescence, and this harsh reality proves the continuity of racism as it extends beyond a linear phase.

“My family is very open and accepting of everyone, but every white person regardless of viewpoints claims they aren’t racist. When having conversations about race and racism, I’ve met other white people who say vulgar things they would never say in front of a black person. Those conversations aren’t had in the same way a POC would discuss it. White people tend to get offended if asked. It’s as if being accused of racism is worse than the racism itself,” Senior Ansley Jones said.