City of Kennesaw kicks off a bigger, better, brighter year with ribbon cutting and KBA luncheon 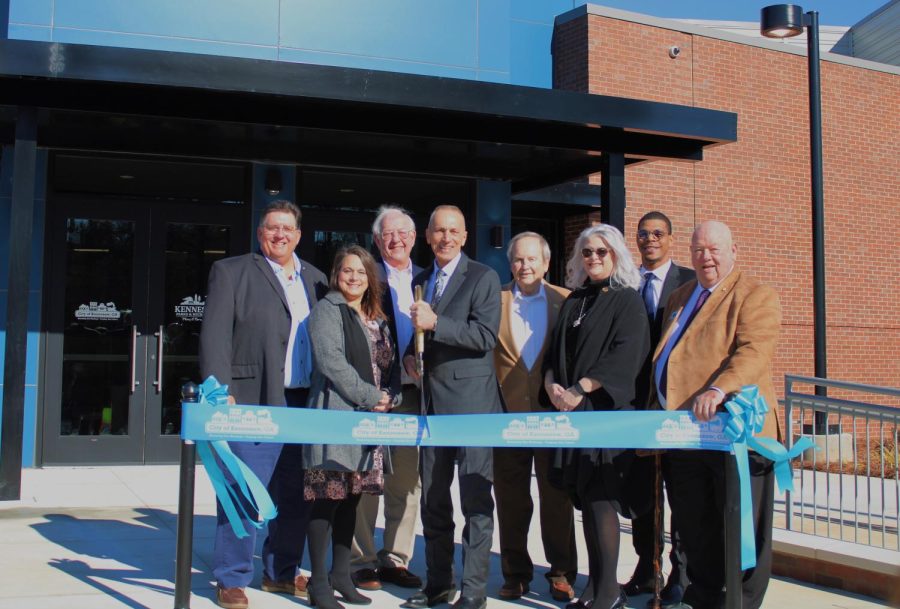 Kennesaw locals and officials celebrated the opening of the city's new recreational center Tuesday morning before the annual State of the City address. The admirable facility impressed guests as they reveled at the grand interior during the first KBA luncheon of 2022. The success of Tuesday’s opening created networking opportunities and allowed guests to strengthen and establish relationships. “Networking is not about what you can do for me and what I can do for you necessarily in a direct sales. It is about your personal sphere of influence. The mayor said it earlier at the ribbon-cutting: it's about relationships. That's what our businesses and community are built on,” Mike Everhart of Great Gig Dance Company said.

Tuesday, January 18, 2022, marked a historical day for the town of Kennesaw. City officials, law enforcers, educators, business owners and numerous community members united to celebrate the reveal and ribbon-cutting ceremony of Kennesaw’s new, highly anticipated Recreational center. Located in the heart of downtown Kennesaw at Adams Park, the beautiful facility came to fruition thanks to revenue from the approved 2016 Special-Purpose Local-Option Sales Tax (SPLOST) dollars. This 1% tax increase allows city officials to pour money back into their beloved city, allowing it to reap the rewards generated by SPLOST dollars. The multifaceted facility boasts 42,000 square feet which house three basketball courts, an indoor track, a gymnastics center, available office space, as well as two fitness rooms. With a mere glance, the building’s impressive exterior allows Kennesaw locals to revel at the opportunistic future that Kennesaw’s recreational center will offer.

Despite the chilly weather Tuesday morning, Kennesaw locals grabbed their jackets and gathered outside the rec center as Kennesaw Mayor Derek Easterling enthusiastically cut the ribbon displayed outside of the rec center. The cutting of the shiny blue ribbon signified the beginning of a new era for the city of Kennesaw. Anticipation mixed with excitement as all in attendance envisioned the bright future ahead of the rec center.  After the conclusion of the ribbon-cutting ceremony, attendees migrated into the rec center for the 2022 State of the City address and first Kennesaw Business Association (KBA) luncheon of the year.

This year, the KBA seized the opportunity to host their annual State of the City Address in Kennesaw’s newest event space. Two of the recreational center’s three basketball courts quickly transformed into a prestigious event space as protective flooring covered the gym floors and round tables adorned with white linen filled the room. Loud Security Company and Carrabba’s Italian Grille graciously sponsored Tuesday’s event. The lunch buffet catered by Carrabba’s invited guests to make a plate and find a seat. While simultaneously eating lunch and finding seats, guests exchanged numerous handshakes as they said hello to old friends and introduced themselves to new faces. Among the plethora of impressive guests, a small group of NC students attended Tuesday’s event.

Despite his rigorous schedule and mayoral duties, Easterling finds himself on NC’s staff and serves as the NJROTC Lieutenant Senior Naval Science Instructor. Easterling’s pride and enthusiasm for his teaching job remain evident on a daily basis in NC’s halls. Inviting six of his talented NJROTC students to Tuesday’s State of the City Address served as a testament to Easterling’s dedication to his students and city.

“I am so excited and honored to be here to support Lieutenant Easterling today. Being here really lets us show everyone what he has instilled in us and what he instills in his community,” senior Mykel Lawson said.

As guests finished their appetizing lunches and settled into their seats, the speech section of the event began as the newly elected KBA president Dana Dorris, welcomed guests. Dorris exuded gratitude for her newfound position and echoed KBA’s 2022 theme: “bigger, better, brighter”. Following her heartfelt welcome, an array of esteemed guests took the stage as they prayed for a successful year, promoted their businesses and thanked guests. As the speakers made their final statements and descended from the stage, the beloved Kennesaw mayor prepared to deliver his keynote speech. After his introduction from Meagan Davis, Easterling made his way to the stage to the sound of applause.

Kennesaw’s 2022 State of the City Address constituted the 7th consecutive year where Easterling fulfilled his mayoral duties by delivering a keynote speech. This year, the mayor wanted his address to stand out from previous years. Epitomizing the meaning of the common phrase “a man of many hats”, Easterling dabbles in the art of woodworking and complimented his 2022 address with his handcrafted blocks that boasted letters that spelled out Easterling’s 2022 goals for Kennesaw when rearranged on multiple occasions.

As he dove into the verbal portion of his address, Easterling acknowledged the trials and tribulations the city of Kennesaw endured over the past year as America coped with the imposed by COVID-19. Despite the inevitable challenges Kennesaw faced over the past year, Mayor Easterling detailed the success Kennesaw cultivated amid an ongoing pandemic. Speaking highly of the continued dedication of Kennesaw locals Mayor Easterling repeatedly emphasized the importance and impact of relationships throughout the Kennesaw community.

“Kennesaw we know who we are and we stand with each other. We love our country and our community, we believe in God and we know where we want: life, liberty, the pursuit of happiness and a safe place to raise our families,” Easterling said.

Easterling’s natural leadership, confidence and outgoing personality engaged his audience as he detailed the future of Kennesaw. Featured on three of his wooden blocks, Easterling focused on his “big three” aspirations for Kennesaw: business development, sustained relationships and an economic development strategy. Easterling believes that with the dedication that runs deep in Kennesaw, following these three steps will create a successful 2022 and establish innumerable benefits for the future generations of Kennesaw. After rearranging his blocks a final time to spell out the word ‘success’ Easterling left his audience with a piece of scripture to ponder, encouraging them to abandon fear and conquer timidity through courage and power. As the mayor left the stage to a standing ovation, the sound of applause stood as a measurable testament to the bright future Kennesaw will cultivate.