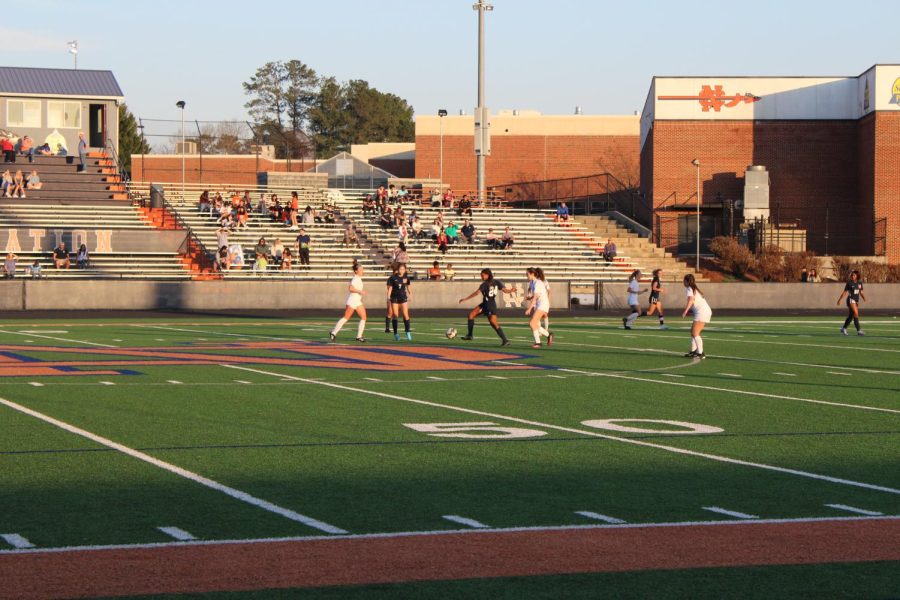 The NC varsity soccer teams played their tenth game of the season against the Marietta Blue Devils Friday, March 4 with the girls winning (6-1) and the boys losing (1-7). The girls displayed impressive cooperation amongst themselves and demonstrated their talent on the field. Playing her last season on the team, Columbus State University commit Kenna Armitage (#11) savored her time on the field. “We’ll be missing her, for sure. She’s a really nice person, and we wish her the best going on in soccer and life in general. I can say that Kenna maintained a level of positivity that the team needed,” freshman Mackenzie Johnson (#21) said.

The NC Warrior girls and boys varsity soccer teams faced the Marietta Blue Devils for their Senior Night on Friday, March 4. The night started with the team’s hype and excitement for the chance to earn a win on the class of 2022’s senior night.

In their first four games of the season, the girls lost three non-regional games against Etowah (3-0), Lassiter (2-0), and Kennesaw Mountain (1-0), and one region loss against North Paulding (6-0).. They tied with Wheeler (3-3) in their fifth game and won their two most recent games against Pebblebrooke (10-0) and North Cobb Christian (11-1).

The boys won one regional game against North Paulding (2-1) and lost three against Hillgrove High School (6-1), Marietta High School (7-1) and Walton High School (7-0). Their current losses outweigh their wins, but the team aims to improve later in the season.

Before the game, the girls prepped joining the crowd and singing the national anthem. The lady warriors kept up a positive attitude the whole game and started strong by scoring two in the first half, and four in the second half.

Kenna Armitage (#11) shot the first goal of the night during the first half of the game. Shortly after Symone Thomas (#23) scored two goals back to back. Zia Tomlin (#24) scored three goals which finished the girls’ game at 6-1. On the boys’ team, Kyan Hohn (#4) scored the first and only goal of their game.

The team decided to change up their strategy for this game, using a different formation (4-4-2) instead of the usual (4-4-3) because of a game they won before utilizing this strategy.

Senior players leaving face the sadness of moving on from their NC family after playing most of their high school lives with them.

“We’ve been working really hard for senior night and we’re really excited. I know some of the players’ families who usually don’t stay for the whole game are coming and they can’t wait to watch the games. We’re all just really excited to compete. Especially since this night is kinda meant and named after us,” senior Jordan Karim (#2) said.

After every game, the team improves together and individually. Especially after a loss, the team works on several new formations to progress. During practice, head coaches Justin Buckles and Richard Dennard usually let the teams practice different formations and choose which one would work depending on the upcoming opponent.

With an amazing knockout and a precise strategy, the Warriors played their best and ended the games with the girls winning 6-1 and the boys losing 7-1. From scoring goals to blocking opposing shot attempts, the Warriors hope to play better and improve in their next game. The lady warriors aim to improve their already amazing techniques for their next game, and the boys hope to play better and improve in theirs on Tuesday, March 15.