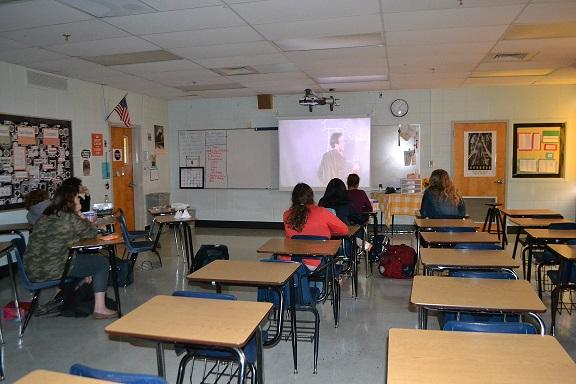 Film Club’s first meeting consisted of a showing of Dead Poets Society. “Even though we didn’t get as many as we had hoped, I’m still really glad that a good number of people showed up, especially considering the fact that there was a threat to the school,” said club creator Kiky Etika.

“He was a major film geek, and I mean that in the best possible way,” Galloway said. “I don’t get to show a lot of movies in class, so all the movies I show are after school. When he asked me about starting a film club, I said, ‘Why not?’”

The first movie last year’s film club watched was Jaws, and they worked their way through The Artist, The Thin Man, The Nightmare Before Christmas, Inception, and various other Oscar-winning performances.

“It was a fairly small club, and I felt like the people in the club actually liked it that way. But it’s always nice to introduce new types of films to different types of people, so I’d really like to see more people join up this time,” Galloway.

Buxton graduated last year, so junior Kiky Etika decided to create the club anew: “I really wanted to continue the tradition of movies and films,” Etika said. “I think the cinema is a great form of art and it really provides a great bridge for people to connect.”

The club watched two movies over the past couple weeks including Dead Poets Society directed by Peter Weir, Moonrise Kingdom directed by Wes Anderson, and Spirited Away directed by Hayao Miyazaki.

“We try to meet every week  if possible,” Galloway said. “I think we’ll be voting on movies to watch at each meeting.”

Those who participate in film club provide snacks and food. As of now, the sole activity consists of watching the movie, with conversation on the side.

“Our discussions tend to be rather rushed since it gets rather late, but I want us to eventually have really in depth talks about the films we watch,” said Etika.

Both Galloway and Etika recognize that people will come and go depending on the movie shown, but Galloway expressed hope that they would “wind up with a core of kids who are just interested in trying new things.” Many of the students currently in the club embody this hope.

“Movies are good visual representation of stories, and I like seeing that kind of art, so I hope to try and attend the club as often as I can so I can be exposed to more movies,” said senior Bintou Sillah.

The movies Etika and Galloway aim to show are those that are not always readily available or well-known among students.

“I’d never even heard of Moonrise Kingdom before we watched it in Film Club,” said junior Rowan Yeni. “That’s the reason I joined the club in the first place: to see new films I’ve never seen or heard of, and to hear other people’s views about films.”

“I really thought Film Club was a great opportunity to expand my horizons,” said sophomore Sam Smith. “It is definitely a good way to be exposed to new types of entertainment and meet some new people.”