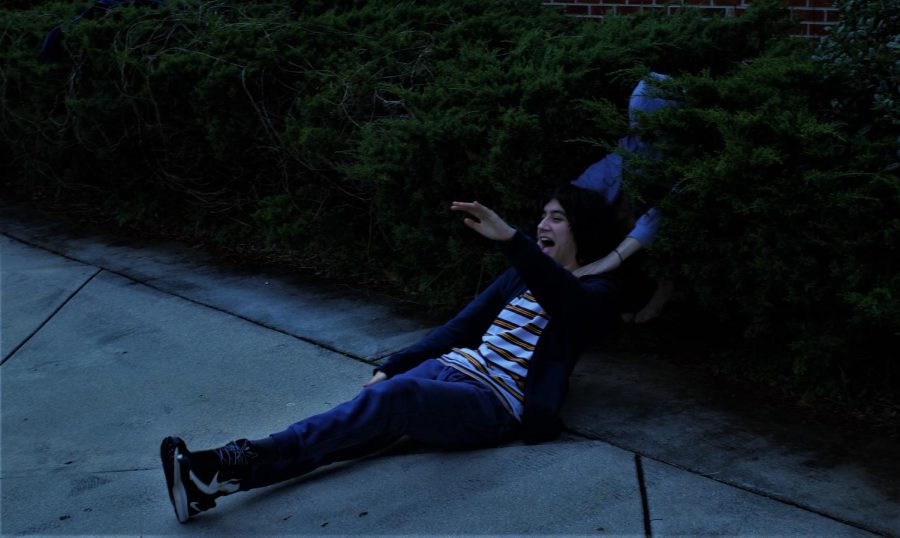 “I think hunting for creatures like bigfoot and moth man is a lot of fun! Trying to capture such legendary creatures on camera is so exciting, and I’m thrilled to hear that North Cobb has their own now!” freshman Rory G. Wilikers said. Students and teachers alike come to school filled with excitement for a chance to spot the NC Creature in action.

It lurks! It stalks! The NC Creature finally made their first on camera debut this past Monday on the phone of Damian Van Helsing. He caught the Creature, typically spotted lumbering around the practice field and reading in Mr. Jordan’s classroom, stuffing a student into their flesh pouch.

When Helsing brought up the abduction of fellow classmate Wanye D. Acula to administration, the response he received neglected to actually address the now missing student.

“The night is coming. The moon will rise and darkness will fall upon us. It is those whose loyalty lies with the darkness that will rise beyond their mortal shells and ascend to realms far beyond our own. I feel nothing but sorrow for the rambunctious fools who live in ignorance of the true nature of our world, and the approaching end times,” Secret Vice-Principal Alengar Dulatharr said.

After the photo saw circulation on various students’ social media platforms, Helsing started to garner local attention. Fearful students and curious community members alike joined forces to fill his inbox with inquiries about the beast and his relationship with it.

“I can’t bring myself to go to school anymore. Not with that thing there. Whatever it is, it’s shifty. It’s dangerous. People used to call me crazy, insane even, for raving about the Creature, but now that this Helsing guy got a photo it has become reasonable to fear it. Not cool,” NC alumni and local hermit Seymor Bundts Sr said.

Following his sudden drop into the limelight, Helsing retired into his family’s manor beyond the half-moon hill on the northern border of the realm. He relinquished all technology and spent one long grueling weekend in the mansion’s sprawling library. There he remained until Monday, studying the forbidden (by the PTA) lore of the dark ones.

“The time has come. This moment has been long-awaited, young journalist. The story you see unfolding before you is merely the climax of a centuries long conflict between my family and the things that go bump in the night. You would be a fool to remain in this city, and so would your readers. My time has come, your time has come. The dawn of humanity lies beyond this final stretch,” senior Damian Van Helsing said.

The Creature now cowers in fear of the forces revealing themselves in the courtyard. No longer does it lurk and stalk the students of NC, threatening to stuff them away for safekeeping, but instead it shakes and shivers in the language hall bathroom as if waiting for its mother to come to bring him home. The prophecy revealed through Helsing’s research foretells a meeting between him and NC’s very own priestess of darkness, Secret Principal Jupitor Nyx. The old one’s plan for this showdown to happen this coming Friday, and the admin expects all teachers to allow their students to leave class and head for the arena so that they may witness the beauty of life and death reveal its true form.