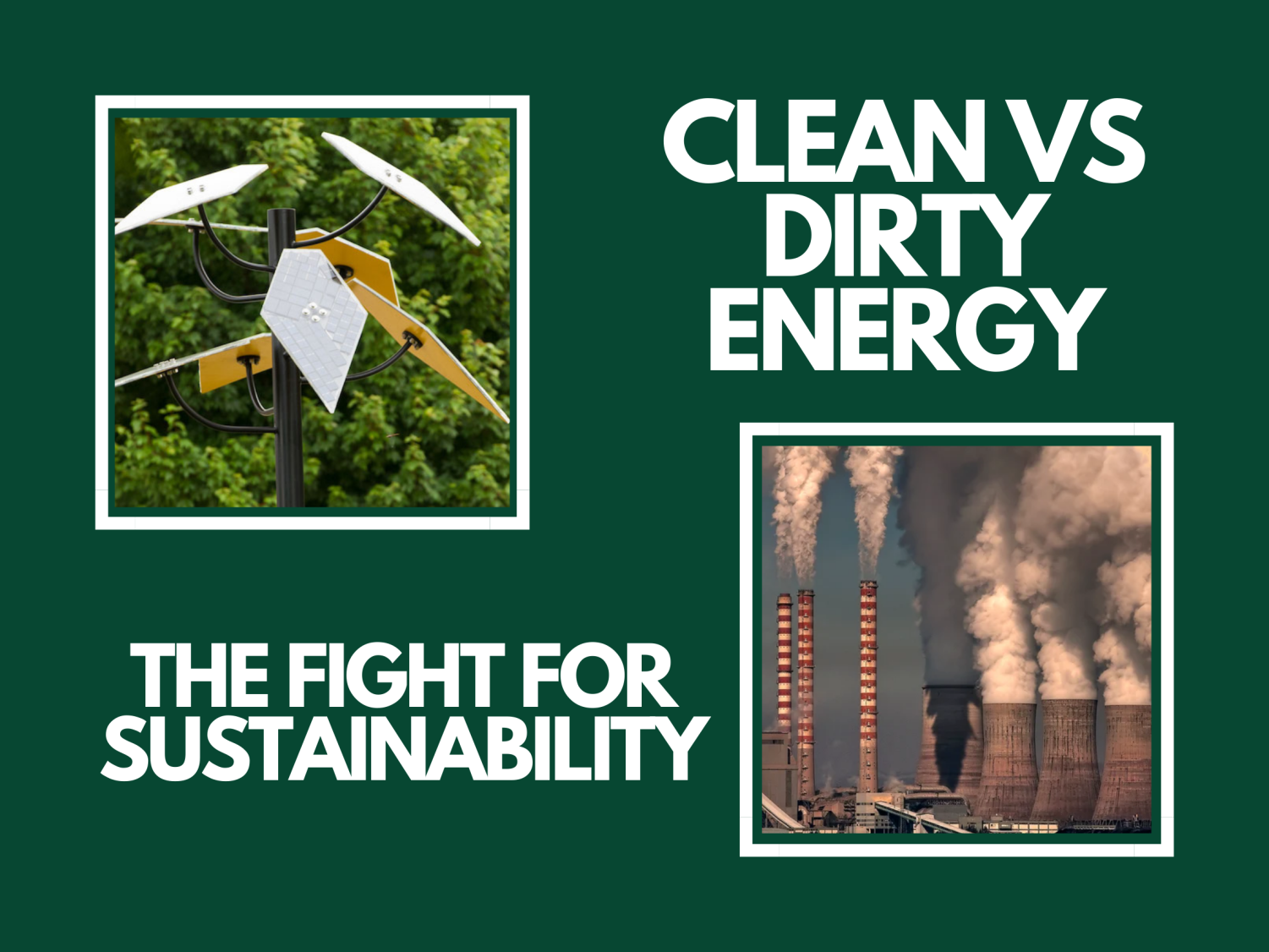 Clean energy preserves the earth’s natural energy sources and reduces the risk of environmental disasters. Its counterpart, dirty energy, harms communities and accelerates climate change. Small projects across the nation can not only raise awareness of the issue but additionally spark new ideas. Kennesaw State University, located only 10 minutes away from NC, urged its students to partake in this clean energy movement. In 2019, after a year of collaboration, students revealed a steel-framed “solar tree,” meant to generate over 200 watts of electricity. While the technology only illuminates a nearby sign featuring the University logo, the idea will motivate others to make similar projects. (Courtesy of: Socialist Alternative and Kennesaw State University)

Clean energy preserves the earth’s natural energy sources and reduces the risk of environmental disasters. Its counterpart, dirty energy, harms communities and accelerates climate change. Small projects across the nation can not only raise awareness of the issue but additionally spark new ideas. Kennesaw State University, located only 10 minutes away from NC, urged its students to partake in this clean energy movement. In 2019, after a year of collaboration, students revealed a steel-framed “solar tree,” meant to generate over 200 watts of electricity. While the technology only illuminates a nearby sign featuring the University logo, the idea will motivate others to make similar projects.

Clean vs. dirty energy: the fight for sustainability

“Dirty energy,” a shorthand for energy production that accelerates climate change and harms communities in the global south, contributed to 61% of the electricity generated in the United States in 2021. Another 19% came from nuclear energy, which harnesses its own long list of pros and cons, and only 20% of energy came from renewable energy sources. The majority of America’s energy sources come from dirty energy, determined less by the technology than by the harm that it causes the environment.

Climatologists define climate change as a long-term change in the average weather patterns that now define Earth’s local, regional and global climates. The leading cause of climate change involves the use of dirty energy, such as the extraction or burning of fossil fuels (oil, gas and coal) for electricity generation. This releases excessive amounts of carbon dioxide into the atmosphere, further escalating the greenhouse effect and warming the global climate. Transportation accounts for about 29% of these emissions, the largest share by far. This process and countless other uses of dirty energy displaces people, damages their health, pollutes land and water and exploits workers. However, society appears attached to these energy sources and becomes entirely crippled without them. Current gas prices provide a perfect example of the power it possesses over society. During any steep expansion and major increase in inflation, the rise in gas prices yields a general decline in the economy.

“We rely heavily on dirty energy such as oil and gas. Without it, everyone goes crazy. I feel like I hear all the time about how the earth is slowly dying and we’re just contributing more and more, and yet no major change has happened. I feel useless in the whole situation and wish there was something more we could do to fix this issue,” junior Selina Smith said.

The United States struggles more than other countries with producing an excessive amount of pollution. Europe (particularly northern Europe) continuously stays more environmentally conscious than the US, despite Americans’ sincere and fervent attempts to stay green. Per capita, CO2 emissions in the U.S. added up to 19.78 tons according to the Union of Concerned Scientists, which used 2006 data, compared to 9.6 tons in the U.K., 8.05 tons in Italy, and 6.6 tons in France. 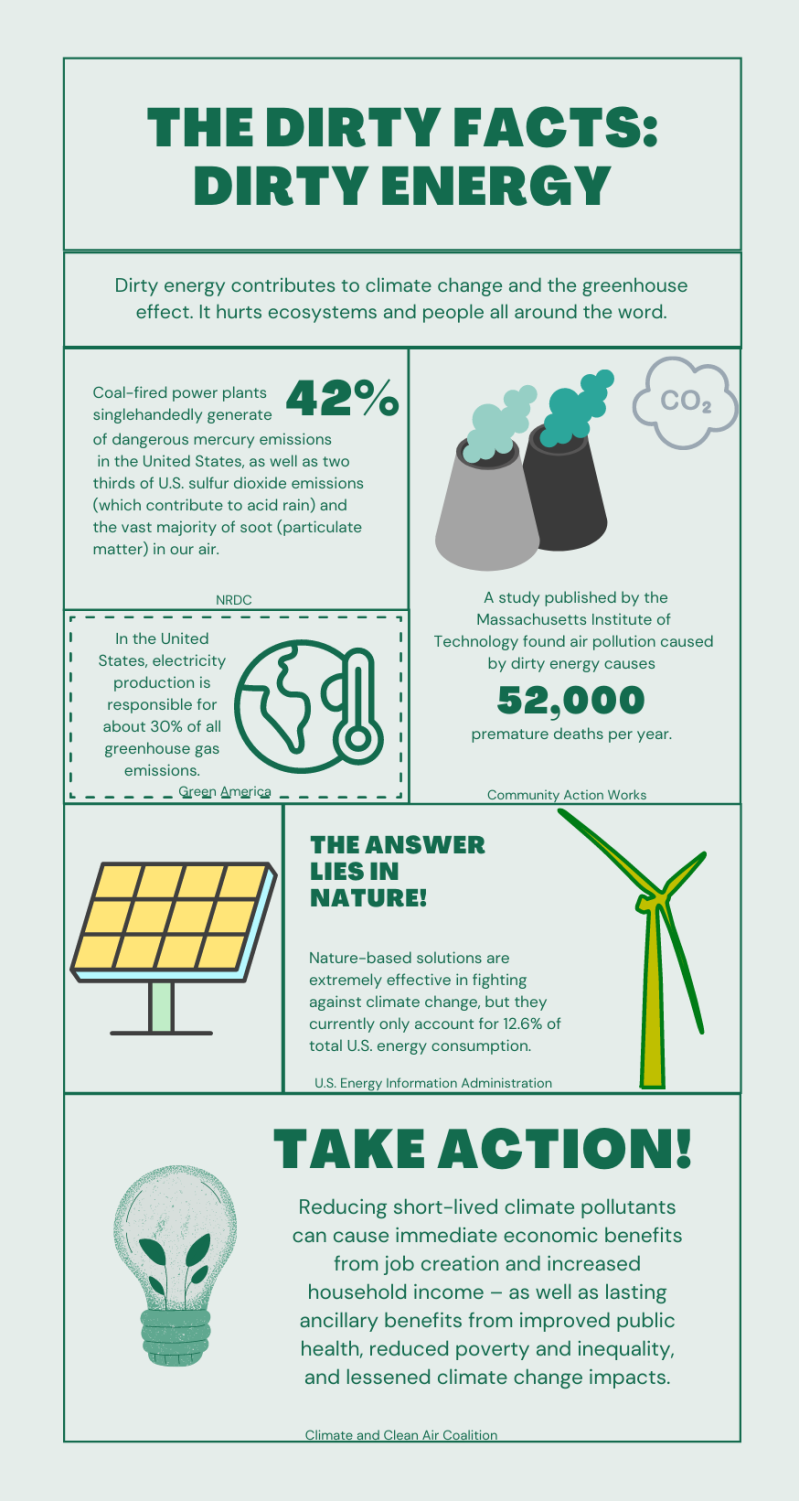 The need for alternative energy sources has become increasingly apparent, but finding and implementing these sources does not come easily. Every part of society depends on energy, and changes in the industry possess impacts that work through the wider economy in intricate and interwoven ways. Dirty energy has supported modern society for an extremely long time, and sadly, no solid plan exists to entirely change the industry for the better. However, numerous scientists discovered healthier substitutes and countless activists already implemented small-scale solutions.

Clean energy, frequently referred to as renewable energy, provides a safe alternative to these harmful sources. It comes from natural sources or processes that can replenish themselves, such as the sun or wind. This technology seems new to a great deal of people, but mobilizing nature’s power has presented itself for years. With the recent spike in pollution and climate change, environmentalists presented innovative technology to combat the unsettling issue.

“There are lots of reasons to cast doubt on the clean-energy future. Wind and solar still account for just a tiny fraction of the world’s energy production. Still, amid the general gloom of climate change, the clean-energy boom offers the rare glimmer not just of hope, but something more: excitement. Unlike fossil fuels — which get more expensive as we pull more of them from the ground because extracting a dwindling resource requires more and more work — renewable energy is based on technologies that get cheaper as we make more,” writer for The New York Times, Farhad Manjoo, said.

The amount of sunlight that strikes the earth’s surface in an hour and a half produces enough energy to supply the entire world’s energy consumption for a full year, so naturally, solar technology has recently become a major source of renewable energy. Solar technologies convert sunlight into electrical energy through either panels or mirrors that concentrate solar radiation. Two main types of technologies allow this process to work: photovoltaics (PV) and concentrating solar-thermal power (CSP).

Photovoltaics work by absorbing sunlight into the PV cells in the panel, which creates an electrical charge. The charges move in response to an internal electric field in the cell, causing electricity to flow. CSP, used primarily in large power plants, utilizes mirrors to reflect and concentrate sunlight onto receivers that capture the energy and convert it to heat. Users can store the heat or manipulate it to produce electricity. This process then needs to become integrated into existing electrical grids, homes and businesses.

This energy contains a variety of uses such as electricity, water heating, space heating, ventilation, lighting, portable energy/chargers and possibly in the future solar transportation. The only notable environmental consequence to this alternative source centers around the fact that land needs clearing in order to place the panels somewhere unless put on the roof of a building or house. However, its lack of pollution and inexhaustible energy makes it a favorable energy source. Despite the extremely beneficial process, the main reason these panels do not reside on every rooftop and field links to the high prices. The new technology costs more than the average person can afford, although once installed it maintains itself and ultimately saves money.

Wind turbines work on a simple principle: they use the wind to make electricity as opposed to using electricity to make wind, like a fan. Wind turns the propeller-like blades of a turbine around a rotor, which spins a generator and creates electricity. This form of solar energy–wind–happens through three simultaneous events. Uneven heating of the atmosphere, irregularities in the earth’s surface and the rotation of earth work together to create wind, with irregular patterns varying across the US.

The majority of wind turbines fall into two basic types: horizontal axis and vertical axis turbines. The horizontal turbines contain three blades and rotate upwind at the top of a tower/pole, the most traditional-looking wind-powered device. The vertical axis possesses multiple different varieties, and the omnidirectional technology requires no adjustment to point into the wind to operate.

Similar to solar power, the energy contains a minimal amount of negative effects. The turbines might harm birds who fly near them and the technology must compete with the low cost of traditional electricity, yet, it does not pollute the air and creates hundreds of jobs. New wind projects account for annual investments of over $10 billion in the U.S. economy, and the industry currently remains the largest source of renewable energy in the United States.

Hydroelectric power currently accounts for 37% of U.S. renewable energy usage and 7% of the total energy usage. The usage of natural flowing water to generate electricity remains one of the oldest and physically largest sources of renewable energy. For example, the Hoover Dam in Nevada, Arizona generates about four billion kilowatt-hours of hydroelectric power each year, enough for over 1.3 million people.

This technology operates by using the elevation difference, which happens through a dam or diversion structure, and water flows in on one side and exits on the other, far below. It relies on endless, constantly moving water to produce electricity. The constantly recharging system maintains power through the kinetic energy of flowing water. Turbines and generators convert that kinetic energy into electricity, which then feeds into an electrical grid to power homes, businesses, and industries.

This energy source cost significantly less than others, after identifying a moving water source. However, this source also comes with cons. The obstruction to water flow could cause issues in fish migration and possibly alter the environment in the area. Unlike dirty energy, the renewable source does not produce any pollution and can quickly switch from zero power to maximum output.

Other alternative sources exist, such as nuclear, biomass, wave, tidal and geothermal. However, a portion of these sources may possess controversy about whether or not they can claim the title of clean energy. While sun, wind and water energy have proven together they can provide society with sufficient energy, the location hurdles and cost limit the possibility of switching to completely green sources. Although the solution exists, the efficiency when implemented in numerous industries currently remains too low to reach the market on a larger scale.

“While I think we can all agree that there are better alternative sources for energy, sources that would not harm the environment, it seems like most people either don’t care enough to help or can’t afford the cost of things like solar energy. I wish it was cheap and more accessible because then I think more people would switch to using it,” senior Joshua Leblanc said. 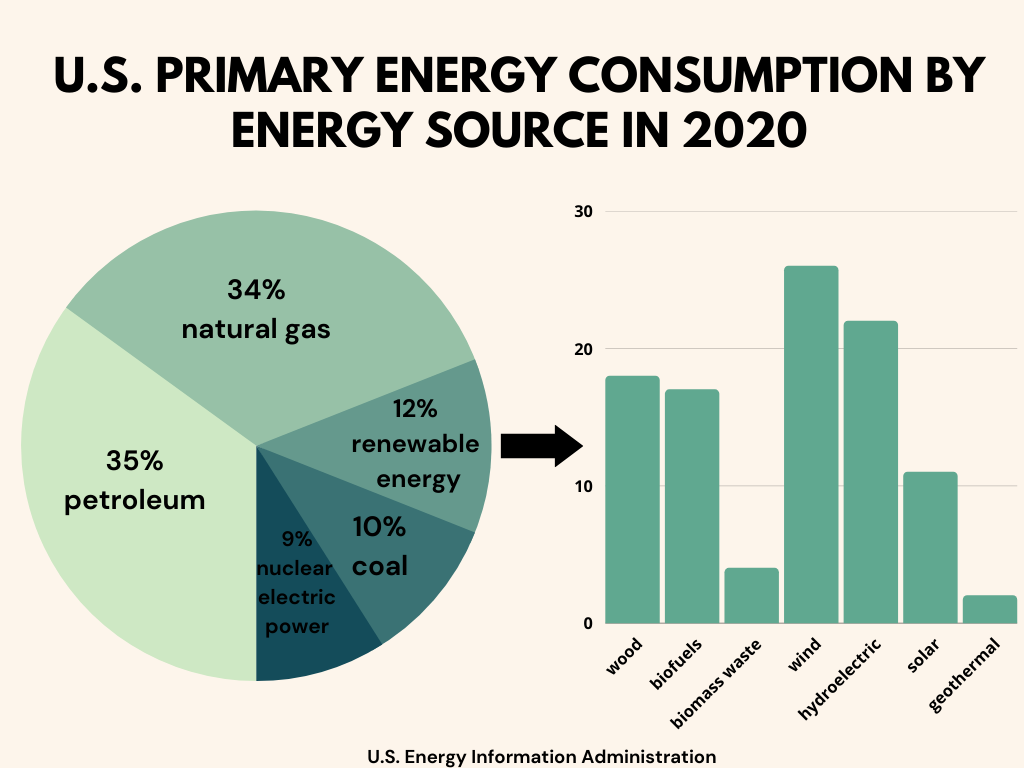 In 2015 all United Nations Member States adopted the 2030 agenda for sustainable development, which provides a shared blueprint for peace and prosperity for people and the planet. This agenda holds 17 Sustainable development goals that propose a crucial call to action for all countries. While all the goals contain an underlying intent to tackle climate change and preserve oceans and forests, goal seven reads “ensure access to affordable, reliable, sustainable and modern energy for all”. All around the world, people have taken actions to reach the goal, raising awareness for the major need, and eventually, it will become achievable.

With just a simple search on google, anyone interested in helping the cause can identify thousands of groups/organizations that aim to fix the issue. People willingly give up their time and money to protect the earth and its people, but finding and implementing these alternative sources continues to constitute the main issue. Identifying clean sources would create increased efficiency and lower greenhouse gas emissions and other pollutants. To find novel solutions, society needs creativity, innovation, and powerful incentives in technology, economics, and politics. While currently unattainable, countless governments and businesses continue to put their money into technologies that harness the energy around us.

“I’d put my money on the sun and solar energy. What a source of power, I hope we don’t have to wait until oil and coal run out before we tackle that,” American inventor Thomas Edison said.