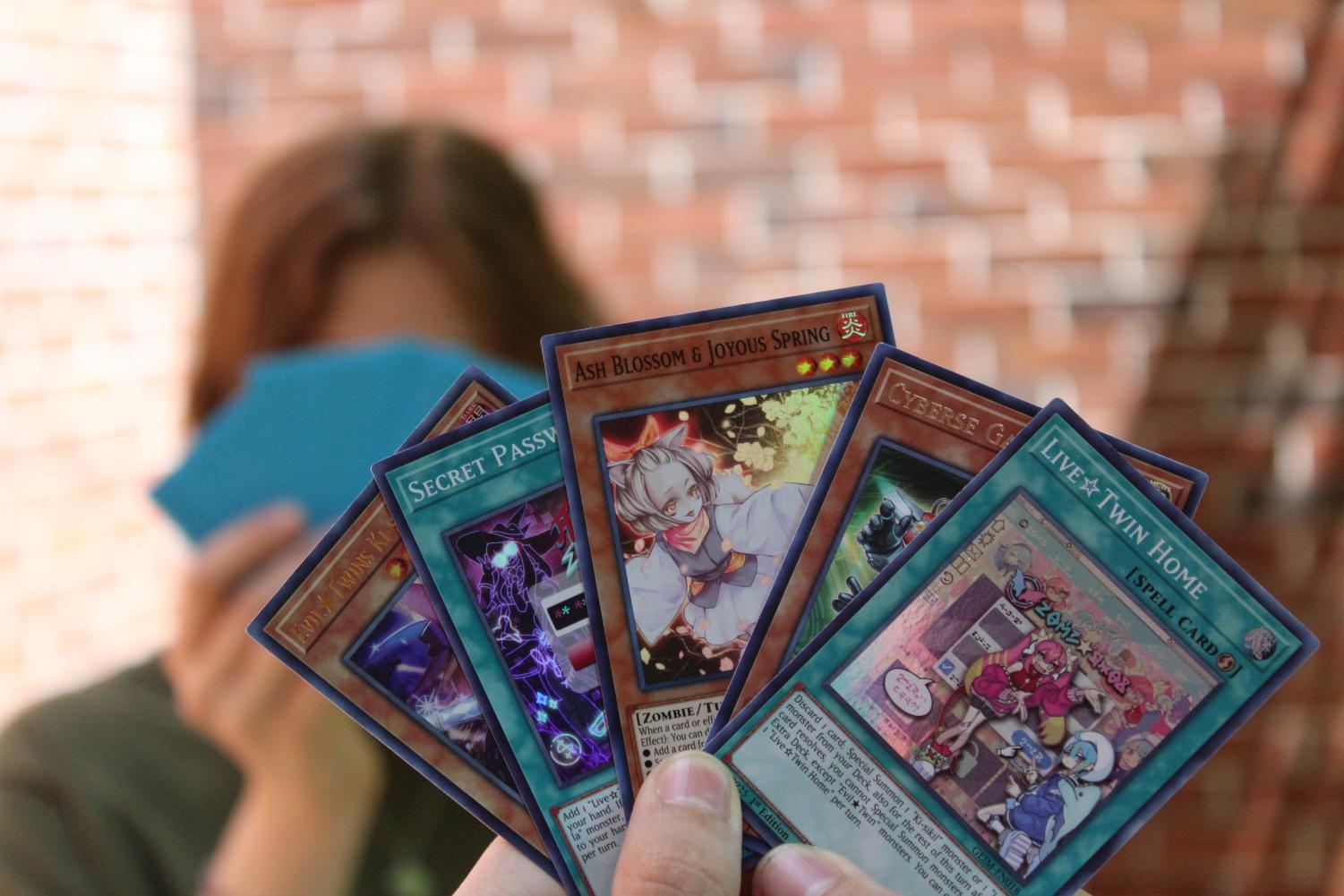 Hobbies help fill free time in a productive and fulfilling way, but ones done alone while making for good me time, fail to capture the same excitement and sense of community that hobbies shared with others do. For people who appreciate games, Kennesaw houses large communities of these hobbyists and offers plenty of gathering places. For those looking to get in on the excitement, game stores and local arcades make for a great place to start. (Dominik Perez)

Hobbies help fill free time in a productive and fulfilling way, but ones done alone while making for good me time, fail to capture the same excitement and sense of community that hobbies shared with others do. For people who appreciate games, Kennesaw houses large communities of these hobbyists and offers plenty of gathering places. For those looking to get in on the excitement, game stores and local arcades make for a great place to start.

Over 70% of American adults find themselves in need of a way to destress. For some, that involves reclining on the couch and switching on the latest Netflix Original. For others, it could involve thrashing around in mosh pits to release the anger they built up throughout the week. However, there exists a select group of people who decide to spend their free time cooperating and competing with friends and strangers alike in game stores across the United States. This unique and often overlooked set of pastimes separates itself from simple hobbies like video games by adding layers of community and competition unparalleled in online spaces.

Stores like Kennesaw’s own Win Condition Games cater to audiences of all sorts, who all share a common trait: their love of games. Whether they play trading card games (TCG) like “Magic: The Gathering”, tabletop roleplaying games (TTRPG) like “D&D”, or compete in fighting games like “Street Fighter”, the communities that love these games converge behind the doors of their local game shops.

“We have tournaments for most of the games we sell here. We have ‘Digimon’, ‘Weiss’, ‘Yu-gi-oh’, ‘Dragon Ball Super, ‘Magic, Pokemon’, ‘Flesh and Blood’ and ‘Y-cross’. We have quite a few card games, and host tournaments every single week. We try and be as welcoming and open to as many different communities as possible. If people want to come to play here we want to have the event for them,” manager of Win Condition, Sean Mogelgaard said.

TTRPGs take the cake when it comes to cultivating the most interaction with their player base, as these games specifically prompt groups of players to interact with the cooperative stories they tell together. The primary purpose of TTRPGs traditionally fosters imaginary worlds in which groups can adventure and weave tales entirely unique to them, and they help build communication and problem-solving skills among their players. Game shops welcome this genre with open arms by offering spaces in which these groups can gather and play, or hosting events like the Adventurer’s League where anyone can show up to join a random group for “D&D” led by a sanctioned dungeon master(DM).

“I enjoy being a part of a story being told, having direct influences on how the world sees me and the outcome of some bigger picture. It’s also awesome getting power-ups and magical items. Fantasy is a fun aspect [of these games] and always will be,” Kennesaw Mountain senior Gavin Williams said.

While TTRPG fans certainly possess a home amongst the catalog of these amazing communities, with most stores stocking shelves full of “Warhammer 40k” and “D&D” supplements, they make up a niche of the people who gather in stores. Places like Win Condition happily cater to them, but historically served as hubs for fans of a variety of card games since their inception in 1993.

Fans of card games typically find themselves introduced to them through a multitude of cartoons and movies as a kid, each designed to sell the very card games they feature, while others find them through friends or stumbling upon them on their own. These games see players going head to head in contests of luck and strategy, and feature aspects a player can engage in even outside the context of a match. Deck building, typically done through purchasing booster packs of random cards or buying individual cards online (or, in a forgotten era, actually trading cards for cards), remains a staple of all these games that feels synonymous with their gameplay.

The strategic appeal of deck building creates a highly creative space in which a player can work on catering the flow of a match to their style of play by utilizing cards they have collected from libraries of tens of thousands of unique cards during their time playing. Players can spend hours pondering over their decks alone or in card shops with friends to optimize their performance as much as possible. The act of acquiring the cards themselves feels addictive, with everything from drawing cards at the start of a round to gambling on booster packs and boxes creating mass appeal. Certain streamers managed to capitalize on this popular draw of TCGs by opening “Pokemon” and “Yu-Gi-Oh” packs during the pandemic.

“I love card games. I play ‘Magic’, ‘Dragon Ball Super’ and a little ‘Yu-Gi-Oh’, but I can only afford to have a single decent deck in all those games. Dragon Ball Super is my main game because of that, but I still go into the store every now and then to work on my decks. I’ll either arrange to meet up with some friends or just go by and see who’s there. There’s almost always someone,” TCG player Patrick Garcia said.

Card games undoubtedly bring a level of competition and excitement to the table at local tournaments and events, but in terms of excitement for onlookers, they pale in comparison to the fast-paced action of a fighting game. Fighting games, as the second oldest of these communities, with TTRPGs holding the title of first, acted as a strong unifier for communities since their inception. With “Street Fighter II” uniting friends and enemies in arcades across the globe, it eventually prompted D.I.Y. tournaments like Battle by the Bay in the mid-90s. This tournament saw players competing in “Street Fighter II”, and would eventually become one of the world’s largest esports events, Evolution Championship Series, better known as Evo.

As time progressed past the era of arcades and arcade machines, the FGC needed to move to greener pastures and found a home for themselves at local game stores. While not every store facilitates tournaments for fighting games, as it costs considerably more to host them than TCG locals or D&D gatherings, they nonetheless remain a staple of local hobby shops. Stores like Flashback Games in Marietta serve as the starting line for numerous future competitors in these tournaments. There, another tight-knit and colorful community began to form.

“Our local communities are very good about informing each other about tournaments happening at different stores. A Yugioh regular will see someone they don’t know at a Tuesday event in another store and then say ‘hey this is the weekly schedule’. A lot of times people, I used to do it too, like to play every single day of the week. So they’d travel to a bunch of different stores,” Mogelgaard said.

What makes these communities stick out from other groups and fandoms? They involve interaction with other hobbyists on a large scale. While players can enjoy games like “Super Smash Brothers” with others online, and even compete in online tournaments, that experience does not emulate the experience of in-person tournaments. Sitting side by side with your opponent (or party member) makes up a key component of all of these types of games. Online options either fail to hold interest or become treated as a secondary option for when groups cannot come together for a weekly session. These communities strengthen bonds, create friendships, encourage art, and reside in the majority of American communities.

“I love how simplistic some tabletop games are. They make it easy to just pick up and play with any group of people. I really like the mindset places like Win Condition or Table Top Club have. It’s nice to have a place where you can just bring energy to a game you’re interested in playing,” senior Stryder Patrozik said.

The player base that enjoys these games knows that the satisfaction they receive comes from something deeper than entertainment value. Instead, each of these games combines unique elements of luck, strategy and socialization that one cannot find anywhere else. Countless people find enough joy and value in these games that they find themselves capable of making side income or careers off of them just through playing their favorite games, creating art and accessories, or simply talking about it online, all thanks to the impassioned community behind them. These people and the places they play welcome newcomers with excitement and open arms, so anyone who wants to participate needs only to journey to the nearest game shop and get involved. In no time they will start to understand the relaxing yet engaging nature these hobbies can offer to their fullest extent.