For over 100 years, fish amongst other marine life live their lives in a glass tank. On display for thousands to see, the fish swim in never-ending circles until their final days of life. In addition to marine life, animals exploited for entertainment and money remain prevalent in circuses and zoos. Companies receive backlash for the inhumane conditions the animals endure, however, several ignore the remarks. Actions to prevent animals from living in captivity and free those already captive, remain possible. Marine life deserves the ocean instead of tanks. (Giovanna Talone)

For over 100 years, fish amongst other marine life live their lives in a glass tank. On display for thousands to see, the fish swim in never-ending circles until their final days of life. In addition to marine life, animals exploited for entertainment and money remain prevalent in circuses and zoos. Companies receive backlash for the inhumane conditions the animals endure, however, several ignore the remarks. Actions to prevent animals from living in captivity and free those already captive, remain possible. Marine life deserves the ocean instead of tanks.

Millions of people each year visit the Georgia Aquarium, which serves as America’s largest aquarium. In 2018 alone, over 160,000 students and educators visited the Georgia Aquarium with their schools. Eager hands pet the stingrays and mini sharks, and frantic feet board the moving floor surrounded by glass passing through an ecosystem full of colorful fish and intimidating sharks. Hungry mouths eat lunch beside pictures of the ocean, then experience the dolphin show in awe. When the trip ends, visitors buy a dolphin stuffed animal or seashell bracelet, just to lose the souvenirs a week later. Kids and even adults can experience joy in seeing sea life up close and receive an unforgettable experience. However, a harsh truth lies beneath the smiles and laughter filling the aquarium, revealing the negative impacts of aquariums.

The Georgia Aquarium houses approximately 1,000,000 animals from hundreds of different species. Known for the dolphin shows, shark cage dives and an array of hands-on activities for visitors of all ages, the Georgia Aquarium in Atlanta remains one of the most popular tourist attractions in the state. Other aquariums provide similar opportunities but do not appear to compete. The Georgia Aquarium seems like a harmless and fun idea for a family trip or date, but in reality, remains the opposite for animals imprisoned in the aquarium. Removing animals from their homes and natural environment to live in unrealistic living conditions stands as an unethical act further damaging an animal’s mental and physical health. The dangerous impacts of captivity create unhealthy behavior and responses from the animals causing more harm than good.

Captive animals can harm themselves over their stress and anxiety when trapped in glass prisons. Aquariums let people touch, tamper, poke, ride and swim with animals displayed in the exhibits. This leads to injuries inflicted on animals, as well as the people participating.

“It honestly depends on the aquarium and what they’re doing and what they have. With something like fish, I don’t think [aquariums are] an issue or a problem. When you start talking about mammals, especially those that can echolocate like dolphins, sea lions, etc, then I don’t think that’s appropriate,” NC oceanography teacher Jason Evans said.

Public aquariums originate from as early as the 1850s. The Fish House at the Zoological Society of London (ZSL) London Zoo records one of the first aquariums holding cetaceans, the same marine family that whales and dolphins belong to. British marine zoologist, Anna Thynne built the first stable sustained aquarium in the late 1840s. After sharing her discovery with the ZSL Zoo in London, the idea took off. Although rather inhumane, P.T Barnum created the world’s first functional oceanarium years later. The cement and brick tank in his museum basement’s “small ocean” had hopes of showcasing Beluga whales in the 40 by 18 feet tank. However, his first two whales died after just the second day. On July 13, 1865, P.T Barnum’s American Museum caught on fire burning almost everything inside, resulting in two beluga whales boiling to death. His oceanariums sparked popularity resulting in the construction of museums and aquariums displaying ocean animals to the public.

“When you see the behavior of individuals who have spent years in captivity, you can imagine the frustration, boredom and even despair that they may be feeling. They often live shorter lives and exhibit repetitive behaviors such as swimming endlessly in circles, lying on the floor of the tank for long periods and chewing on metal bars and the concrete sides of the pool. Some marine parks give dolphins tranquilizers to relieve the stress they may be feeling. All adult male captive orcas have collapsed dorsal fins likely caused as a result of spending an unnatural amount of time just logging at the surface or swimming in circles in shallow pools. In the wild, just 1% of adult male orcas have collapsed fins,” Whale and Dolphin Conservation captivity lead Rob Lott said. 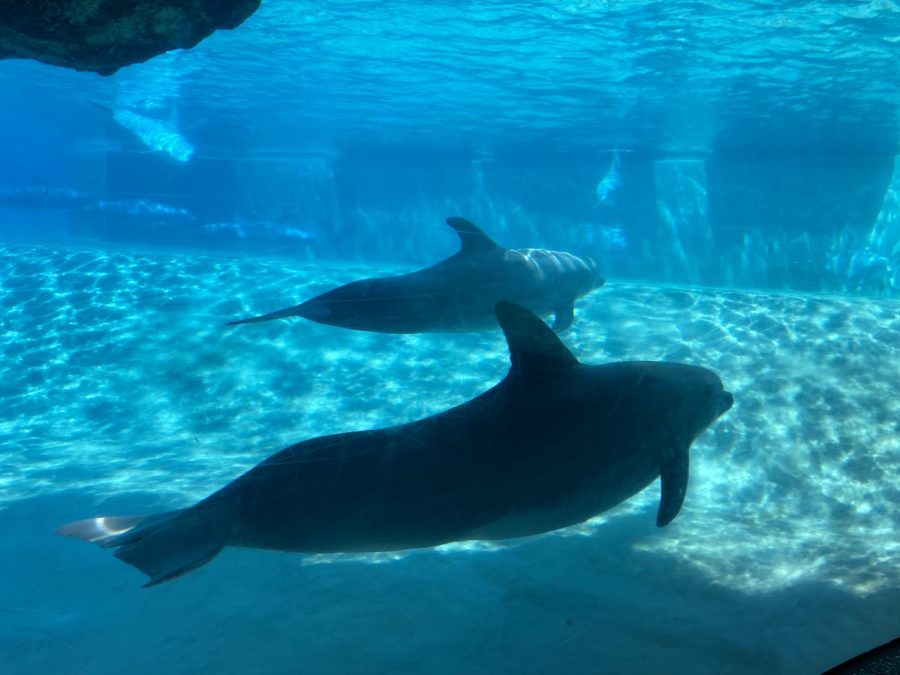 Gallery|4 Photos
Giovanna Talone
Six dolphins at SeaWorld swim together in a small and shallow tank. The dolphins tread around in the display tanks prior to groups of people entering the tank to take photos and for those who paid to swim with the animals. The tank consists of no other animals, or any plants or faux coral to replicate an environment the dolphins should live in.

Aquariums educate visitors with information about marine life, but they do not need hundreds of animals in captivity to share facts that one can find on Google. Other exhibits like the dolphin show offer little information about sea life. The only informative part of dolphin shows consists of the facts given during the presentation. For example, presenters may say “dolphins use echolocation when hunting for their food,” while feeding the dolphins dead fish directly into the mouth. How can people learn about dolphins in their natural habitat when trainers command the dolphin’s every move?

The Georgia Aquarium claims to help rehabilitate animals but then displays them for money. In 2012, the Georgia Aquarium attempted to import 18 wild-caught Beluga Whales from Russia to hold in captivity. When the National Oceanic and Atmospheric Administration (NOAA Fisheries) denied the aquarium permission to import the whales, the aquarium took them to court and ended up losing. Nothing appears humane about removing wild animals to make a profit off of publicly displaying them. The Georgia Aquarium claimed to want to remove the Russian whales for the improvement of their genetic diversity. Between 2012 and 2015, three Beluga Whales, a captive-born Beluga: Maris and her two calves all died while captive at the Georgia Aquarium. Maris died at 21; 50 years before her expected death date. News segments released about her death claimed she appeared in normal health, but passed away out of nowhere. The world may never know the truth behind this story.

As of 2016, the Georgia Aquarium refused to hold any more animals taken from the wild but does not intend on stopping captive animals’ transportation to and from the aquarium. Rehabilitation, research, rescue, conservation and education can all happen without holding animals captive and put on display in concrete pools.

For over 150 years, animals of all species endured abuse ranging from aquariums and zoos to circuses and SeaWorld. Sealife does not deserve the torture endured in glass tanks and deserves to live in the ocean where they can swim wherever possible. The captive animals swim endlessly in circles without the chance of ever experiencing a naturally made ecosystem. The replicated ecosystems cannot compare to the real deal. Dolphins and sharks will never hunt for food. The Blue Tang and Clownfish may never meet in the deep blue. Zebrafish will never show their stripes to the wider world of life they should see firsthand, as opposed to flashing cameras and foreign mammals. Dolphins and whales will never swim endlessly through the seven seas. People perceive fish as just animals which creates a double standard, ignoring the abuse does not make the issue disappear. Holding abusers accountable for the continuous suffering of animals remains a necessity in ending marine life abuse.