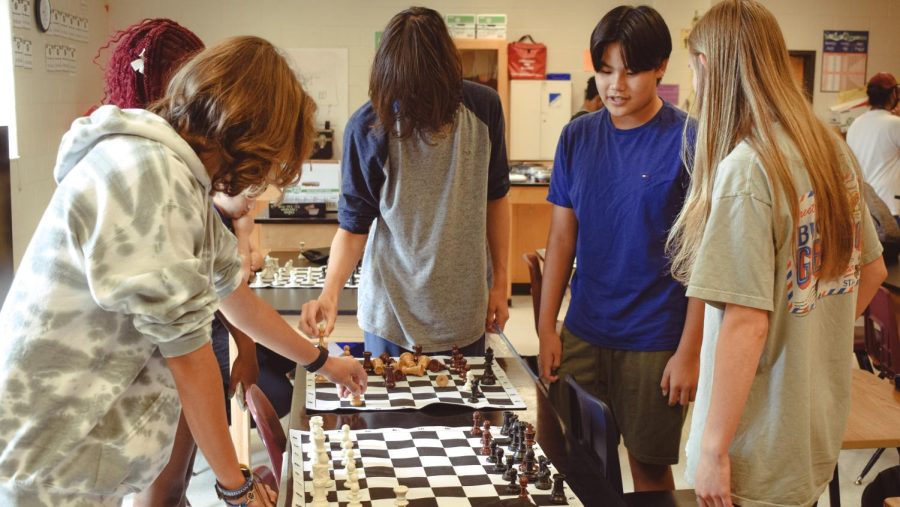 NC Chess players gather during their first club meeting of the 2022-2023 school year to discuss upcoming events. Club president Bianca Orfila-Molinet expressed their love for chess while new chess club officials expanded on what they plan to do this year to improve the chess club. The club will continuously meet every Wednesday from 3:30 p.m. to 4:30 p.m. “I enjoy this club because everyone here is open to new players. I’ve met so many nice groups of people who all have similar goals that we are working on through chess. We are all integrating our skills through working with other people,” Andres Ferreira said.

NC Chess Club opened its doors to new recruitment this past Wednesday, August 8. Despite junior club president Bianca Orfila-Molinet starting the club during the 2021-2022 school year, the previously hosted chess club unfortunately disbanded due to lack of participation. As a result, the new club committee prepares to engage a longer-running association with a new group of fresh faces, minds and a student-run approach. The latest batch of officials thrives on correcting mistakes made with the previous installment of the chess club to establish an inclusive and engaged league.
Orfila-Molinet started Chess Club after a spark of interest in the game last year. With the help of informational books, practicing on their own time and a thirst for knowledge, Orfila-Molinet began their journey to learn everything they could about the ins and outs of chess.
“I started playing chess at six years old when I moved here [America] for the first time. Chess was one of the only things I understood in the U.S. because I didn’t speak English and chess was one of those things that I immediately understood and was genuinely good at. I wanted to restart the chess club because it’s a lot of fun for me,” Orfila-Molinet said.
Orfila-Molinet’s passion for chess drove the club to an extensive turnout last school year. Weeks prior to the first meeting, Orfila-Molinet opened recruitment to the first official vote for leadership positions. With junior Amsha Shastrula as vice president, junior Lynn Nguyen as treasurer and junior Gina Zheng as secretary, these new branches eagerly develop their chess knowledge to keep the club up and running.
“I feel very happy about being on the chess team. It’s a very prestigious club and I really enjoy being here because I need to learn more about playing chess, especially for president Bianca. To help improve the club, I’m going to pitch as many ideas as I can and work collaboratively with the officers,” Shastrula said.

The officers of the chess club open themselves to teaching and learning about the game of chess as they work within the school. Several students joined the club last school year, intending to learn at a beginner level. The chess club pushes the limits of a typical league and focuses on accommodating not just one or two, but all participants.
Members and non-officials of the league continuously convey their love for the chess team and the countless friends made through playing within the club. Although the team did not establish an official school league for the competition last year, the minor tournaments they could join still encompassed newer players.
“This club is very open to beginners. When I came to the club [for the first time] I had very limited knowledge of chess, but I was still welcomed and allowed to play in tournaments even though I had only been in the club for some time,” sophomore Jack Scafidi said.