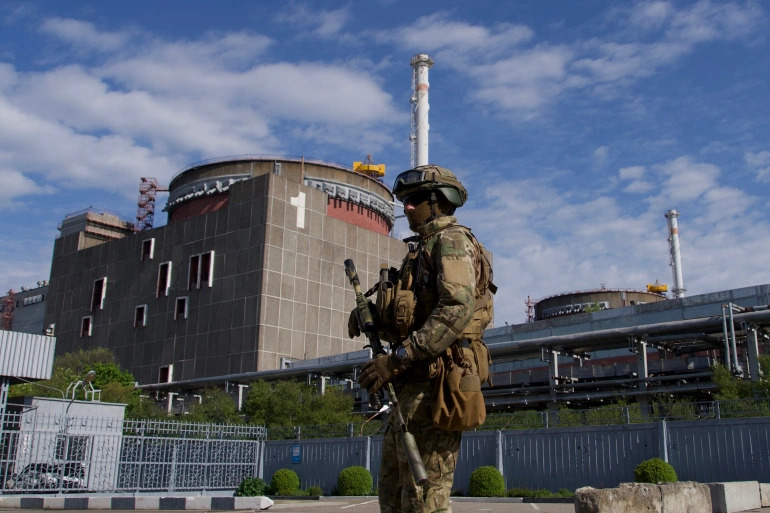 Thursday, September 1, a team from the International Atomic Energy Agency (IAEA) assessed the condition of Europe’s biggest nuclear power plant, Zaporizhzhia. The plant provides electricity to more than half of Ukrainians and other countries in Europe. The Russian-controlled site experienced concerns over the lack of safety measures due to fighting. A report published September 5 by the IAEA explained the destruction of crucial structures in the plant could lead to a nuclear disaster. The report urges both Ukraine and Russia to demilitarize the site to prevent a dangerous nuclear situation.

As the Russo-Ukraine conflict continues, fighting has increased damage to Europe’s biggest power plant, Zaporizhzhya, which resides in Ukraine. The site became Russian-controlled on March 3 with a warning of the potential dangers of a nuclear disaster. September 5, workers put out a fire brought on by shelling and cut the plant’s final transmission line connecting it to the country’s power system. Both sides, Ukraine and Russia, have blamed each other’s shelling for the destruction caused.

This brings a global outcry concerning the danger of radiation leaks. The United Nations (UN) Secretary General Antonio Guterres called for the plant’s demilitarization to halt an impending nuclear disaster. On September 1, a team from the International Atomic Energy Agency (IAEA) visited the site and published a report on September 5. The report warned the public about the dangerous outcomes globally if near fighting continues. The damage seen firsthand included locations close to reactor buildings, places that store fresh nuclear fuel and the radiation monitoring system. Additionally, the IAEA provided people to help stabilize the situation in Zaporizhzhya and install a continual presence. The report addresses Russian military equipment present at the plant. UN secretary general, António Guterres, called for the Ukrainian and Russian military to stop fighting in the area.

“I consider the fact that Russia is doing this right now, right on the eve of the IAEA [International Atomic Energy Agency] conclusions, very eloquent. Shelling the territory of the ZNPP [Zaporizhzhya Nuclear Power Plant] means that the terrorist state does not care what the IAEA says, it does not care what the international community decides. Russia is interested only in keeping the situation the worst for the longest time possible,” said Ukrainian President Volodymyr Zelensky.

The Zaporizhzhia nuclear power plant provides 51% of Ukraine’s electricity and provides power to other European countries. Experts say the chance of a Chernobyl-style situation will not likely happen but could grow comparable to the Fukushima nuclear disaster. The plant can withstand direct attacks but real issues would pertain to the damages to functions. The essential cooling system for nuclear material allows for the avoidance of a nuclear accident. Damage from shelling could upset the process. Human error can contribute to nuclear problems as well. The Russian-controlled plant holds Ukrainian workers hostage and has operated the plant since March. Concerned experts worry about the psychological stress workers experience may cause them to make significant errors.

Kyiv believes Russia plans on diverting power from the plant from Ukraine to Russia. The Zaporizhzhia plant provides more than half of the electricity to Ukraine. This loss would create a power crisis and leave millions of Ukrainians without power. Ukraine citizens already face a loss of power with the destruction of power lines and infrastructure.

“Obviously, the electricity from Zaporizhzhia is Ukrainian electricity and it’s necessary – especially during the winter – for Ukrainian people. And this principle must be fully respected,” Guterres said.

Nuclear power allows for a long-term process of energy extraction and a more environmentally friendly energy source. Unlike coal and gas plants, nuclear power provides low carbon emissions for energy, important for stopping impending climate change. When implementing safety precautions, the outcome ensures no dangerous impacts in the surrounding areas or globally. As a result of the Russian occupation, the operator of the Zaporizhzhia Nuclear Power Plant and the Ukrainian government cannot comply with their nuclear and radiation safety obligations under international agreements and IAEA safety standards.

“Active fighting around places like Zaporizhzhia and other major places of nuclear power production, that’s really dangerous, not just for Ukrainian people, and not just for Russian soldiers who might be attacking there, but for all of us because nuclear fallout doesn’t stay neatly in one place. It gets into the atmosphere and it affects all of us. I think it is very concerning. I think the international community should really be pushing for quite a lot of oversight of those areas and the establishment of a demilitarized zone around them, not just for the safety of Ukrainian citizens but honestly for all of us,” AP Comparative Government and Politics teacher Carolyn Galloway said.