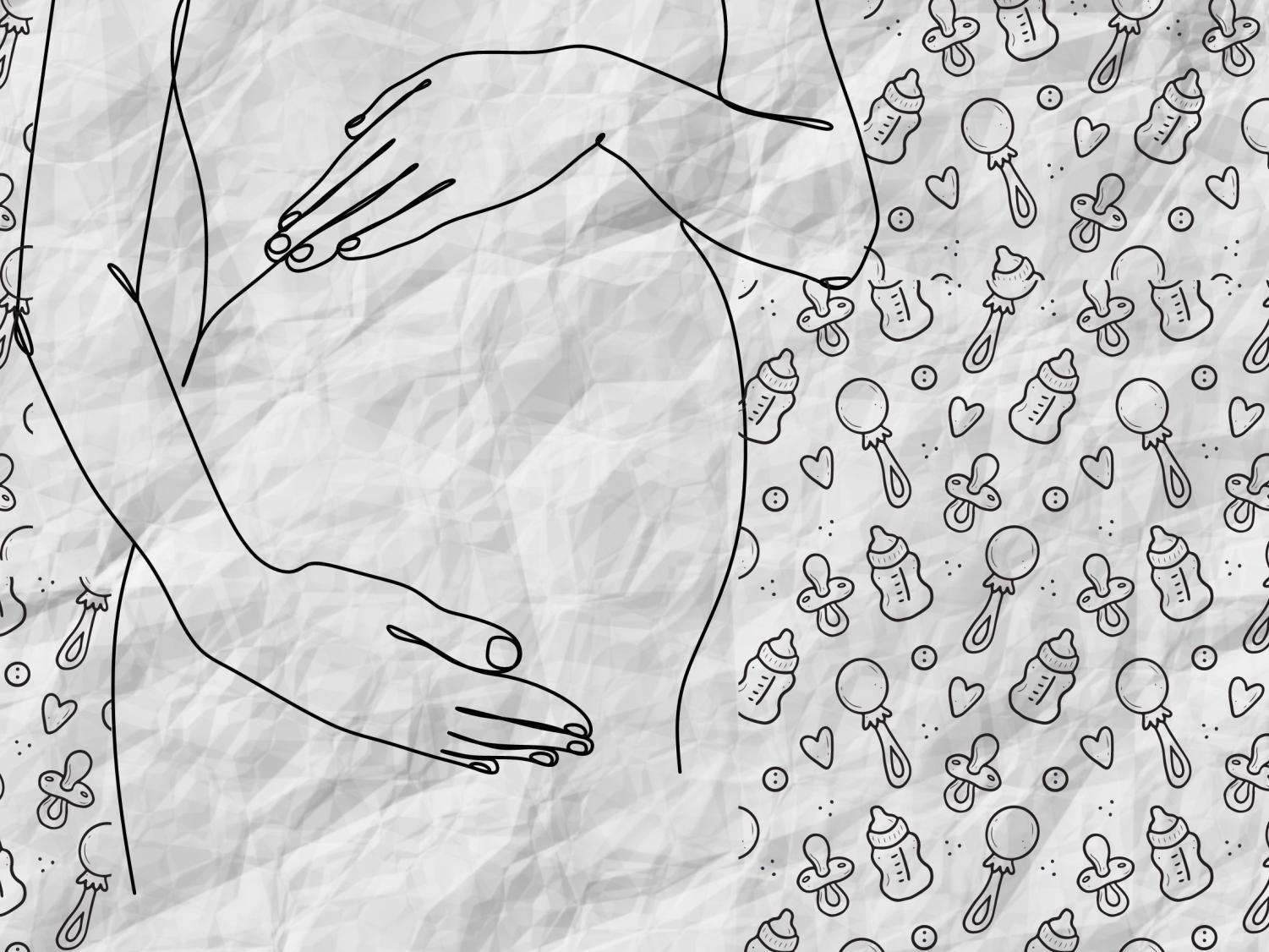 Black mothers continue to die at alarmingly high rates after giving birth. A number of factors contribute to this high mortality rate, such as health inequities, experiments on Black women and the lack of respect from medical professionals shown toward Black women. Studies reveal the mortality rates of these women, but the world refuses to acknowledge the problem and address this issue. (Erinn Gardner)

Black mothers continue to die at alarmingly high rates after giving birth. A number of factors contribute to this high mortality rate, such as health inequities, experiments on Black women and the lack of respect from medical professionals shown toward Black women. Studies reveal the mortality rates of these women, but the world refuses to acknowledge the problem and address this issue.

Worldwide, women of all races in a variety of environments and predicaments experience complications before, after and during childbirth. However, the mortality rate of Black women after birthing their children remains considerably high. Doctors instinctively blame pre-existing health conditions and unknown underlying complications; however, this trend stands prominent among Black women. When word of preventable deaths reaches millions of families and communities internationally, it generates immense pain among them.

According to the Centers for Disease Control and Prevention (CDC), Black women statistically experience maternal death three times higher than white women; pregnancy-related complications cause approximately 700 deaths annually in the United States for Black women. The U.S. holds the highest maternal mortality rate for all women among developed countries, and women in third-world countries experience even higher maternal death rates. About one-third of Black women’s deaths occur during pregnancy, over half happen during labor or in the first week postpartum and 13% occur between six weeks and a year after birth. Because postpartum deaths dominate, the women likely carried a condition that doctors could have prevented or treated, but chose to undermine.

Unfortunately, lack of education can prevent Black women from understanding the standards of a quality medical system. They do not always recognize their freedoms or the way providers must treat them in difficult situations, which could open doors to a series of health complications. If Black women carried the power and ability to protect themselves, they could receive the necessary care before serious issues occur. The first step to making this a reality includes incorporating this knowledge into schools’ curriculum or simply telling the Black youth their rights in a basic conversation.

“One way to prevent these deaths is to inform Black women about the healthcare system. While it’s very unfortunate that it is the way it is, informing people of their rights and what healthcare should look like makes it easier for them to speak up for themselves when they aren’t being treated properly if there are no physicians around to defend them,” magnet senior Mya Conner said.

Factors such as access to healthcare, living environments and employment contribute to these maternal health disparities. Citizens must hold officials accountable for segregation, discrimination and historical laws intended to oppress Black women. Racial segregation remains a major component in racial health inequalities, as it impacts several social structures. Additionally, Black women residing in underprivileged communities cannot easily attend top-notch hospitals due to a lack of means and transportation. Accessible hospitals do not always provide the necessary care to protect these women’s lives. Any pregnancy puts women at risk, but chances of complications can skyrocket without proper resources, treatment and finances. 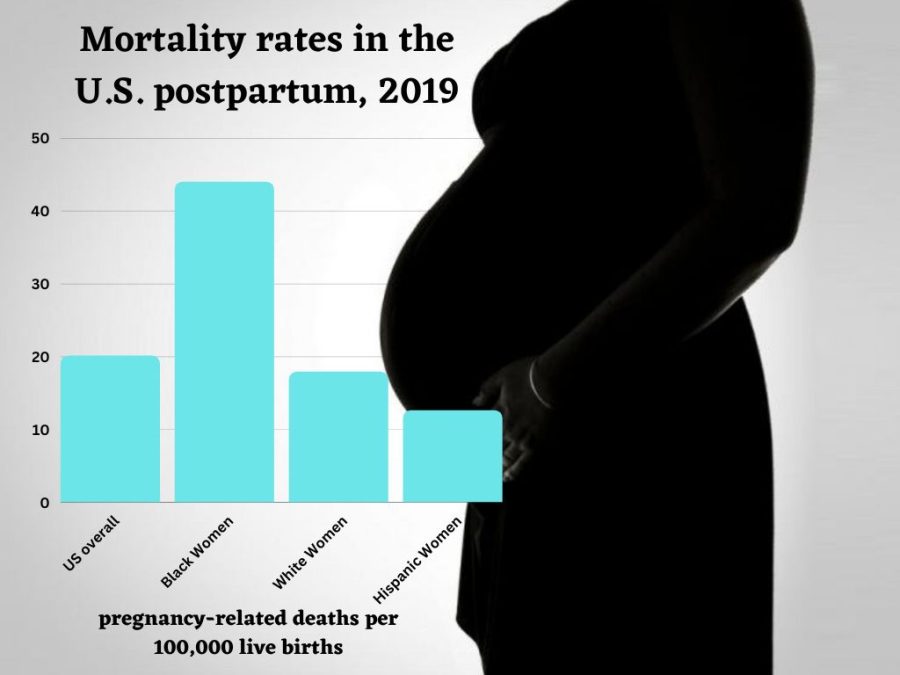 Over time, the creation of medicines and technology eased the pain of childbirth and allowed for an easy birthing process. The first generation of feminist activist groups argued that women hold access to pain medication as a fundamental right. They promoted the use of contemporary medications, which gained a negative reputation after the publicity of their side effects. Nevertheless, epidural anesthesia gained popularity, and other drugs such as nitric oxide and pethidine allowed for calm deliveries. However, a handful of impoverished or low-income families cannot afford to receive high-quality healthcare from hospitals. This rubs Black communities the wrong way because a vast majority of these deaths prove avoidable, but the willingness of doctors to aid them with modern medicine remains extremely low.

For longer than existing generations can remember, the world continuously places Black women into a box by creating harmful stereotypes. Society constantly labels Black women as resilient and claims that they possess an above-average pain tolerance. Researchers at the University of Virginia surveyed 222 white medical residents and students about their views on the matter. Nearly half of the participants held false assumptions about African Americans; 12% of these individuals claimed Black people’s nerve endings remain less sensitive than white people and nearly 60% believed Black skin seemed thicker. Evidently, doctors and nurses do not always take these women seriously in regard to the topic of pain.

Tennis player Serena Williams experienced trouble breathing after the birth of her daughter via cesarean section (C-section). She endured a pulmonary embolism: a blood clot blocking the artery in the lung. However, her medical support told her otherwise. Williams’ nurse swore up and down that she simply experienced confusion due to the pain medication. The doctors eventually responded to her concerns and performed a computerized tomography (CT) scan, which found several fatal blood clots in her chest. If Williams’ symptoms did not appear apparent, she could have died due to the irresponsible and careless nature of the doctors treating her child and herself.

This damaging thought process stems from the father of gynecology, James Marion Sims’  experimentation on Black women. Medical ethicists and historians argue that Sims’ use of enslaved Black women as medical test subjects falls into an ethically deficient history also including the Tuskegee syphilis experiment and Henrietta Lacks, as they performed procedures without anesthesia, exceeding inhumanity. People criticize Sims for operating under the discriminatory assumption that Black women did not experience pain. Notorious for treating these women as test subjects with his vaginal surgeries, he caused unimaginable suffering among them, as well as upcoming generations.

Consequently, a majority of the Black community tends to stray from white doctors and refrain from participating in studies and trials. According to the US Food and Drug Administration (FDA), only 15% to 19% of participants in recent clinical trials identified as Black. Not only did Sims take advantage of these women, but he performed the surgeries without their consent. This causes women’s skepticism to increase, and their safety to decrease during pregnancy and after giving birth.

“To reduce the maternal mortality rate of Black women, I think one of the biggest things we can do is pour into minority communities and get them into med school. I think the population of Black women in healthcare is incredibly low compared to [the] demographics of the country with large numbers of Black people who have some sort of need for a procedure and when they go to the doctor, they only see and are treated by people who don’t look like them. Obviously one of the biggest things is trusting your provider, but if your provider doesn’t look like you, they don’t have the ability to share the same experiences with you or defend you in that medical setting,” Conner said.

Medical officials in particular can collectively make conscious efforts to prevent this fatal issue. Identifying and addressing unconscious bias in healthcare serves as one of them. While numerous Black women suffer from unpreventable or unpredictable health conditions such as preeclampsia, several medical officials remain oblivious when it comes to their health. Furthermore, housing conditions and healthcare accessibility contribute to maternal health inequities that impede women from receiving adequate care, inadvertently raising their mortality rate. The value of their lives far outweighs how doctors constantly handled them in history, as well as currently.

“One of the main examples of bias by healthcare teams is how pain is perceived and treated in black patients by clinicians. I will emphasize that both explicit and implicit bias comes into play in these scenarios. Black patients’ pain is routinely underrated and undertreated by clinicians. The undertreatment of pain has significant deleterious consequences, such as lost wages, a decline in mental and emotional health, self-medication with counterfeit medications and chronic stress. One of the promises in the Hippocratic Oath is ‘do no harm,’ however, clinicians have routinely caused black patients more harm by undertreating their pain,” Advancing Health Equity founder Uche Blackstock said.