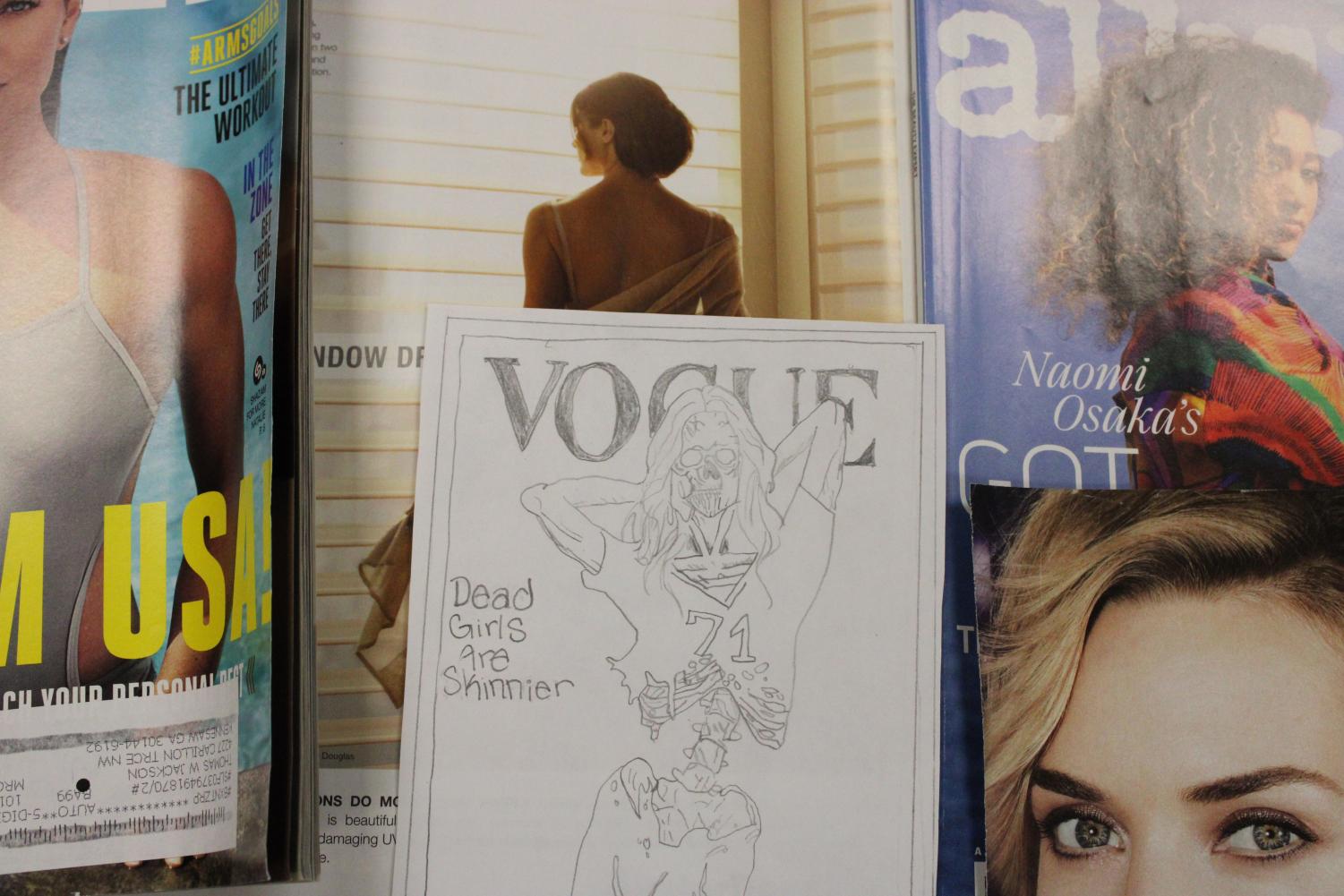 From the outside looking at the modeling industry, people have glorified the modeling profession with beautiful, young, slim women. As with almost anything, there lies a dark side of the modeling industry. From eating disorders to mental health issues models across the world have faced intense manipulation. (Lauren Lee)

From runways to scandals

Commonly,  young girls pick up a magazine when grocery shopping with their parents and on the front cover sees a young lady with a 24-inch waist, silky hair, perfectly round eyes, and a pearly white smile and aspire to look like her one day. Behind every perfect smile lies a hidden pain. For years, people have viewed the modeling industry as toxic and damaging due to its portrayal of unrealistic bodies. The industry contains content filled with unattainable bodies, appearances and lifestyles difficult to escape. Allegations of the mistreatment of underage girls, lacking in diversity, sexual harassment, promoting an unhealthy lifestyle and other horrifying clichés in the model industry continue to surface. For teenagers, depiction goes deeper than viewing relatable images. Because they internalize the messages they see, this can greatly affect their self-esteem. These images are associated with body dissatisfaction and disordered eating.

People struggle to realize the prevalence of eating disorder behaviors in the modeling and fashion industry for multiple reasons. Models do not report the standards and pressure placed on them due to fear of retaliation from their agencies or brands. Additionally, people consider individuals as models like never before due to the advent of social media. Regardless of the differences in media, models report that agencies hold them to unrealistic beauty standards that they must portray regardless of the cost to their physical or mental health. 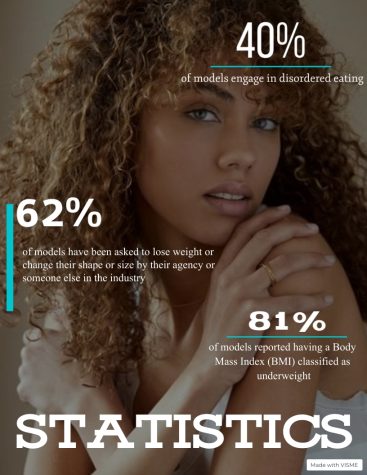 Those in the modeling industry experience immense pressure to appear slim due to unrealistic societal overvaluation of thinness. Models struggle with disorders potentially leading to weight loss through restricting food intake, excessive exercising, purging through laxatives, diuretic use and vomiting. The cycle of restriction and binging can result in models obtaining overall unhealthy relationships with food, causing disordered eating behaviors.

“For me, I feel as if modeling has boosted my self-image. In the industry, I have been grateful enough to come across very amazing and supportive people who have helped me become who I am today and who have truly helped me build my self-image. However, this is not the same for everyone. The modeling industry is extremely subjective and is dependent on the person. I would say give us as models more creative freedom. Models are creative as well and oftentimes we don’t get seen at that,” freelance model Jonah Ruffin said.

Anorexia nervosa, an eating disorder diagnosis characterized by severe restriction of nutritional intake, affects 54% of models. Whether not eating meals to lose weight occurs on an as-needed basis before shows and interviews, or on a consistent basis, it appears frequently in the modeling industry. Portrayed as healthy or nutrition-conscious, these behaviors involve restricting key ingredients necessary to nourish the body. 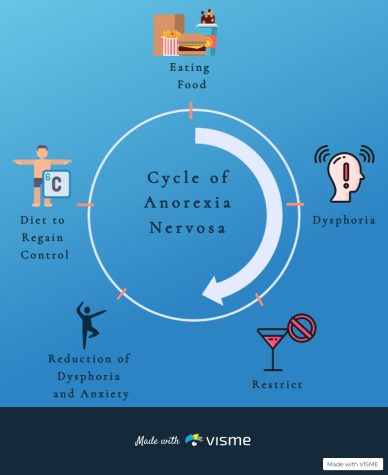 Restriction leads to severe mental and physical consequences, making the prevalence of the restricting mindset in the modeling industry concerning. Considering the longevity of a model’s career not lasting long, this leads to individuals destroying their minds and bodies for a fleeting modeling career and uncertainty on how to take care of themselves or move forward with their lives afterward.

From the outside looking in, people admire the modeling industry for its glitz and glam, statuesque models, high-end fashion designers and the endless international catwalks, which introduced the majority of the iconic supermodels of the generation. Young, aspiring models around the world hope to break into their own, individual multibillion-dollar careers.

“The modeling industry often leads to eating disorders because young girls or guys feel like they need to look like Victoria’s Secret models or someone in a magazine. It also affects the models by feeling like they need to fit a certain weight to get the job as the industry is not inclusive. The modeling industry leads to the destruction of self-image on both sides instead of encouraging others to feel confident in their body,” junior Courtney Olin said.

In May, top international South Sudanese supermodel Ajak Deng took to Instagram to share a heart-wrenching story about her personal experience in the modeling industry. Visibly disheartened with tears running down her face, she emphasized the lack of respect she received from her agency IMG Models. Deng expressed that her experience created suicidal thoughts due to the harsh consistent judgment faced. A study by the Centers for Disease Control and Prevention compared suicide rates among different occupations. The fashion industry ranked seventh on the list behind the police, mechanics and factory workers. This confirms a strong correlation between declining mental illness and working in the fashion industry. Various models stand at the forefront of a strong wave of women unafraid to speak out about their struggles in the modeling industry.

“I’ve been modeling since I was 14 years old, so about 5 years now. I do believe modeling has shown me to be strong-minded. You have to have a strong mentality as it’s a hard industry to be in and rejection can happen a lot. So my confidence and my mindset grew up with it in a way. It allowed me to be more open-minded within the industry, in the sense of always making sure you give your best,” squad management model Eden Grant said.

Plus-size women represent 68% of shoppers, yet for too long magazines did not represent them in advertisements or on runways. Fortunately, the past decade has seen improvements in diversity. Brands began casting size-inclusive models for their campaigns. As a new decade approaches, plus-size models experience success with room to progress. Worldwide beauty standards stirred up controversy for several years now. Magazines representing all shapes, sizes and skin tones as well as integrating them into the modeling industry resulted in similar body types across marketing campaigns shown for years. A new study suggests this shows the beginning to change. In the study, researchers assessed the characteristics and body measurements of 159 plus-size models and the highest-paid mainstream models, as determined by Forbes. 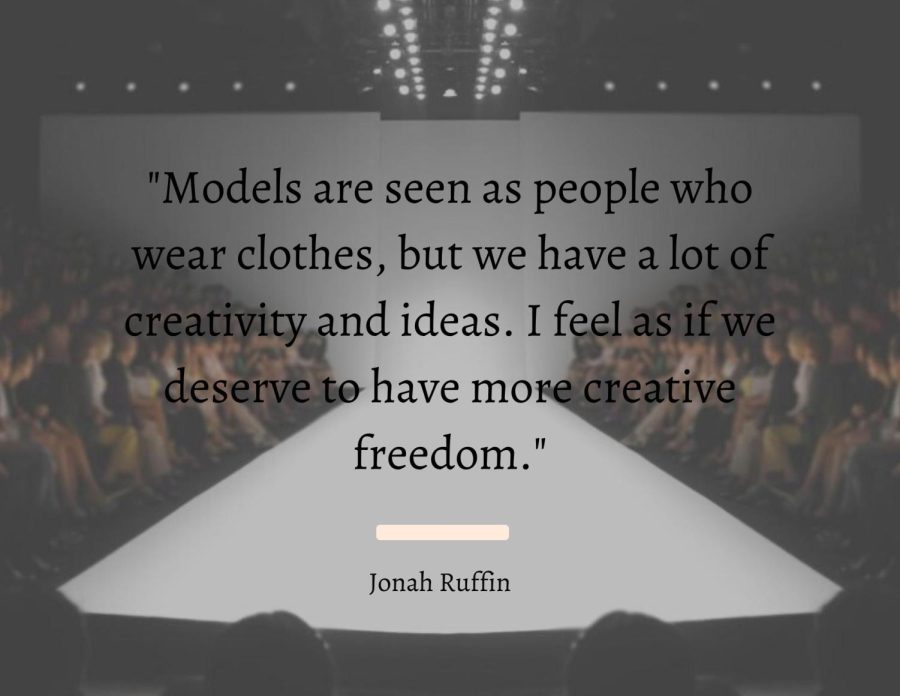 The top 10 highest-paid models obtained an average individual following of 38 million, while plus-size models stood with an average of 3.8 million followers. Even with the massive margin, researchers found no significant differences in average likes and comments per post as well as their total posts. While the modeling industry improved its acceptance throughout recent years, this does not stop current modeling companies from exploiting their models and letting them feel insecure.