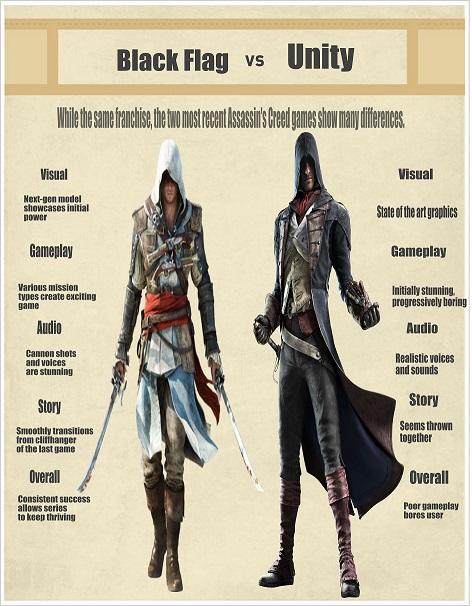 Assassin’s Creed: Unity initially mesmerizes players with its breathtaking graphics and new-age gameplay, but comes up short with too much repetition and monotony.

The objective of the game is to stop Abstergo from interfering with the course of history, therefore taking over the world. The player must defend history while also figuring out new Brotherhood secrets.

The game resides in Paris during the French Revolution era. The protagonist, Arno, watches his father die as a child. He meets the love of his life, Elise, the daughter of the Grand Master of the Templar order. While attending Elise’s party, he witnesses her father’s assassination and becomes wrongly arrested for the crime.

While in Bastille prison, Arno learns that his father was an Assassin and his murder came at the hands of the Templars. During a citizen riot, Arno escapes Bastille, recreating history. Arno becomes an Assassin and soon finds out Elise stands as a Templar. They eventually team up to avenge her father’s death, and fighting for their lives.

Arno eventually meets Napoleon Bonaparte, experiences the September Massacres, and watches the death of Louis XVI throughout the game. During the game, the player explores Paris, including Bastille prison, the catacombs, and even the Eiffel Tower during a time portal.

While the historical accuracy and graphics remain outstanding, Unity is not without its flaws. The game seems repetitive in it’s missions: Find a diversion, assassinate a heavily guarded person, obtain his memories, and escape the area. The repetition proves unbearably boring once the visual appeal wears off.

Previous Assassin’s Creed games allow for more variation between missions. Whether it was assassinating the target, sailing a ship, or spying for intel, the gamer always had a new, exciting task.

Despite the stunning graphics and exquisite detail Unity displays, the monotonous missions make it arguably the worst edition to highly-acclaimed Assassin’s Creed franchise.