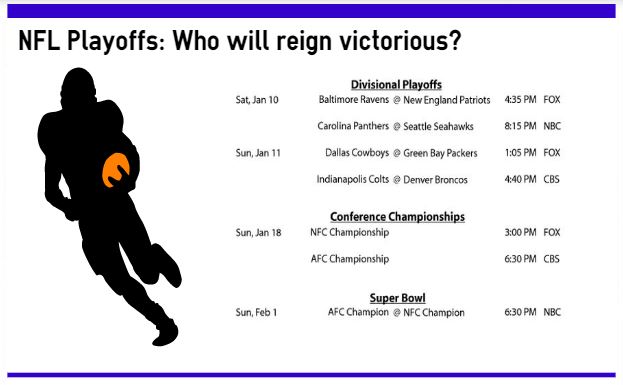 The final eight NFL teams have emerged, and our panel of experts releases their picks for the upcoming weekend: 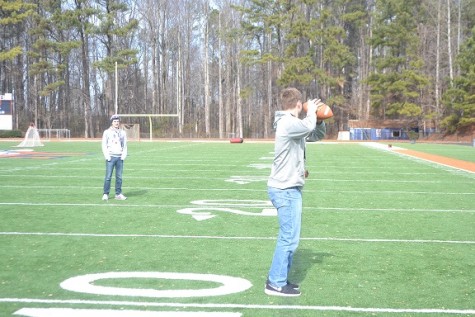 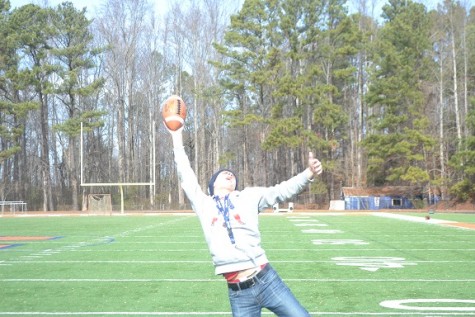 Cameron: Yes, Seattle is the defending champ, and Carolina began the playoffs with a losing record, but an upset may be in the works here. The Panther’s revamped defense, led by Luke Keuchly, can rival even the vaunted Seahawk’s defense, and Seattle is not invulnerable: they lost to the Rams, Chiefs, and Chargers, non-playoff teams, this season.
PREDICTION: Panthers 24 Seahawks 23
Adam: While I would LOVE for the Panthers to come out of this with a win, it just will not happen. Cam Newton has been average at best this year, and Richard Sherman and the rest of the LOB does not help his cause. The only thing I am not confident about is how many words Marshawn Lynch’s presser will be.
PREDICTION: Seahawks 30 Panthers 10
Emmett: Superman Cam is desperate for a ring, and he will do anything to at least be in the Super Bowl, but this year he is out of luck. Russell Wilson and Marshawn Lynch are just way too powerful in Seattle and the defense will be too dominant for the Panthers offense.
PREDICTION: Seahawks 31 Panthers 3
Andrew: The Seahawks also won 10 of their final 12 games and have arguably the best home-field advantage in sports. Although the Panthers are playing their best football of the season, Cam Newton will make too many mistakes. The Seahawks, unlike Ryan Lindley and the Cardinals, will capitalize off of these errors and win the game.
PREDICTION: Seahawks 31-20. 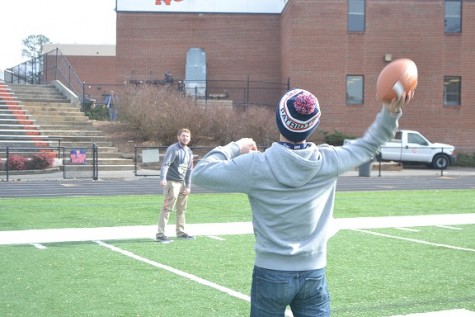 Cameron: Obviously, I am going to stick with my team here. I understand that the Cowboys are undefeated on the road. A date with the best quarterback in the league, Aaron Rodgers will change that. Good luck in the Frozen Tundra, Cowboys.
PREDICTION: Packers 84 Cowboys 3
Adam: The Bears fan I am, I know better than most how good the Packers are. That said, the Cowboys are relentless and their offensive attack may just be the best in the league this year. With both teams possessing explosive offenses and shoddy defenses, expect a shootout in favor of America’s Team.
PREDICTION: Cowboys 42 Packers 35
Emmett: The Cowboys are hot on the road this year and does not show any signs of stopping, until they got on the train to Lambeau. The Packers offense is unstoppable in their home field and there is no way the Cowboys will stop them.
PREDICTION: Packers 42 Cowboys 28
Andrew: This game is as close as it gets to a toss-up this weekend. Despite being NFL’s only unbeaten road team, Dallas’ run will come to an end this Sunday. Green Bay will run the ball with Eddie Lacy, set up play action and beat the Cowboys on those big plays we are accustomed to seeing from Aaron Rodgers, Jordy Nelson and the gang. The Cowboys’ high-powered offense will keep them in the game, but Green Bay is built for shootouts.
PREDICTION: Packers 38 Cowboys 31. 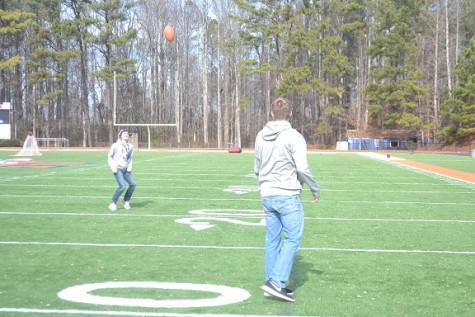 Sophia Mackey
Indianapolis Colts at Denver Broncos
Cameron: Cracks in the Bronco’s armor began to show late in the season. Peyton Manning has had his time to shine; the time seems right for Andrew Luck to claim his spot in the upper echelon of quarterbacks.
PREDICTION: Colts 34 Broncos 27
Adam: Denver’s predictable nature has C.J. Anderson as their MVP over the last few games, and against a porous run defense for the Colts, he should be in for a big game. However, the time is here for Luck and his glorious neckbeard to finally put Peyton Manning on the golf course.
PREDICTION: Colts 27 Broncos 20
Emmett: Colts are going into Denver feeling positive, Luck is feeling lucky, T.Y. is back, and they are ready to pull off the upset. But what the Colts forgot was they are going against Peyton Manning… Peyton will throw at least three touchdowns against his former team.
PREDICTION: Broncos 38 Colts 31
Andrew: Peyton Manning will face off against his former team in the matinee matchup on Sunday. To beat the Broncos, the Colts will need to force Peyton Manning to throw the ball outside the numbers. The Bengals exploited this weakness three weeks ago on Monday Night Football as they picked off Manning four times. If the Colts defense can shut down the run and force Peyton to throw it 50 times in the cold weather, they will pull the upset.
PREDICTION: Colts 33 Broncos 31