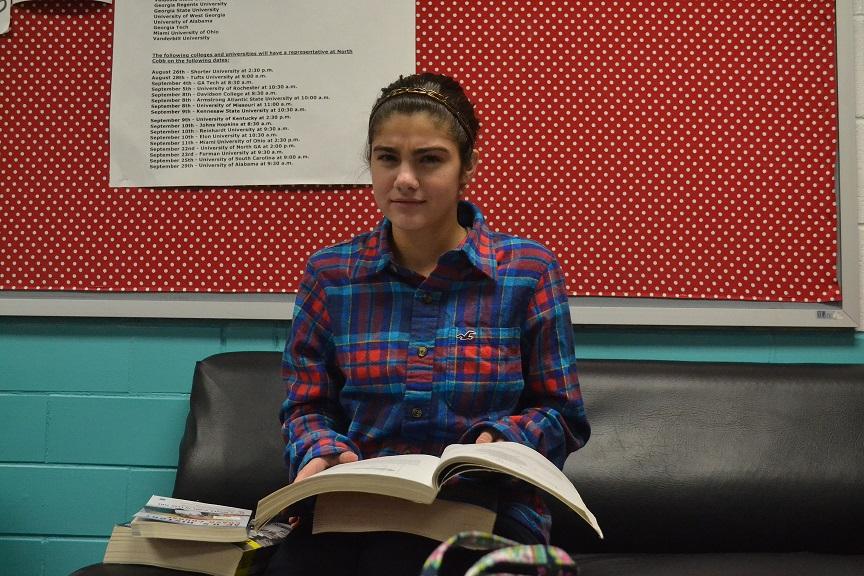 Junior Rowan Yeni studies for her bundled classes during her lunch period. “It’s really stressful and I don’t like having to study during all of my free time because I would want to do other fun things, but I can’t,” she said.

As the new year begins, many students receive new schedules and new classes. Some, however, carry a double-dreadful load in 2015. When juniors hear “the bundle,” negative emotions such as fear and alarm arise.

Upperclassman delight in telling freshmen and sophomores horror stories about their experiences in the bundle, but with a new semester and a fresh perspective, perhaps some of those stories will dwindle down.

“I’m pretty happy I took the bundle. I feel like the only way you’re going to get through the classes, especially AP Lang, without hurting yourself is to take the bundle, because it’s a lot more spread out, giving you more time to get things done,” junior Ben Jones said.

Plagued with both AP Language Composition and AP US History last semester, more juniors expressed similar sentiments along with relief that this new semester builds upon skills learned in the old one.

“It’s better. You kind of know what’s happening now. You’ve gotten into the swing of it; you know what to expect, so you’re not quite as stressed. I’m a lot better with getting stuff done for my classes now, although it’s sometimes hard,” junior Rowan Yeni said.

Still, the new semester comes with obstacles that some may have been forgotten last semester.

“I’m kind of scared this semester because I’m worried about my grades. They’re not as good as I’d like them to be, and I’m running out of time. Last semester it was easier to ignore, but this semester is all that’s left,” junior Riley Swab said.

Unlike last year, the first semester’s grades were unknown and marked as final for that semester. Instead, the grade from last year carries over to this one.

“I feel like I know what the teachers want now, but I’m also more scared. Last semester my grade kind of suffered because I didn’t know what I should have. The stakes are higher now because I’m expected to know so more more. While it is more stressful now, there’s a lot less work this semester. I know which classes to focus on,” junior Kiky Etika said.

As for the horror stories told, many juniors in the bundle now dismiss them as out of hand.

“I’ve heard from others that unbundled is a lot harder than bundled. I’d definitely recommend people take AP Lang and AP US History year-round. It just makes more sense because you have so much more time. People I talked to last year told me not to take unbundled, and I took their advice and I haven’t regretted it,” junior Alex Flack said.

For now, juniors simply remain grateful for the end of last semester, because it indicates another step towards the end of the year.

“I’m fine with the bundle, I’ve always felt it was a good way of doing things, and I don’t regret my decision, but I am glad it’s a new semester,” junior Emory Perry said.